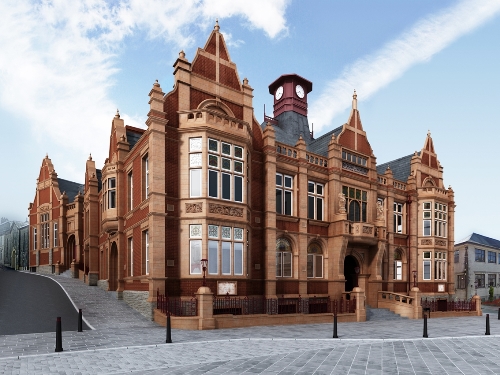 The project is being implemented by the Merthyr Tydfil Housing Association and comprises an extensive refurbishment, which includes the reinstatement of historic wall, ceiling and floor finishes; the provision of level access and lifts; the replacement of the roof and windows; and the transformation of an external courtyard. In addition, an efficient heating system is being installed, along with grey water harvesting tanks for washroom facilities.

Graham Construction is the main contractor on the Merthyr Tydfil Old Town Hall project, whilst Austin Smith Lord is the architect. Malcolm Bowen of Bowen & Partners is the project manager, Mann Williams is the structural consultant and Troup, Bywater & Anders is the mechanical & electrical consultant.

Work began on the project in February 2012 and is currently on schedule to reach completion in July 2013. 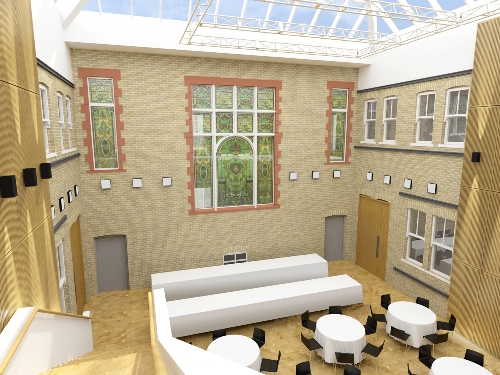 “We believe that the Old Town Hall restoration will be the catalyst for the regeneration of the town. It will attract new users to the town centre and will further enhance Merthyr’s evening economy.”

The Old Town Hall project is being funded by a team of partners, including the Welsh Government, the Wales European Funding Office, the Heritage Lottery Fund (HLF), Merthyr Tydfil County Borough Council, Miller Argent and CADW.

Commenting on the progress of the project, Dr Manon Williams, Chair of the Committee for Heritage Lottery Fund Wales, said:

“When we awarded this grant back in 2011, we recognised the potential that this project had to continue the excellent work that is being carried out in Merthyr Tydfil.

“The Old Town Hall is the grandest building to have survived in Merthyr Tydfil’s commercial centre and stands as a permanent reminder of the town’s former status.” 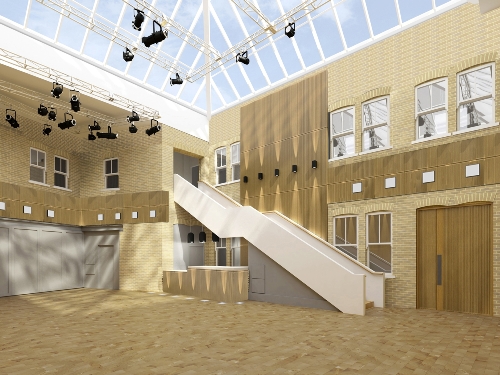 “The Housing Association consider that the renovation of the building and its new use as a cultural hub will reignite the fortunes of the town as a destination. Furthermore, its contribution to the regeneration of the town centre will help to create a new, and much needed, level of optimism about Merthyr Tydfil amongst local residents and the wider communities in the surrounding villages.”

Built in 1896, the Old Town Hall was originally designed to provide a home for the town’s civic functions and law courts. In addition to the work being undertaken on the site, a number of other projects are also taking place in the town as part of a much larger regeneration scheme.