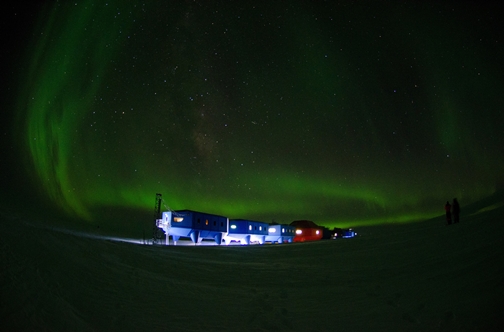 Halley VI is the latest Antarctic Research Station to be constructed on the Brunt Ice Shelf, Antarctica.

The £50 million station became fully operational in February 2012, was officially opened in February 2013, and is already an icon for British science, architecture and engineering.

The installation of Halley VI replaces the 20-year old Halley V facility and is the sixth such station to be constructed on the Brunt Ice Shelf. The British Antarctic Survey’s (BAS) Halley VI station was funded by the Natural Environment Research Council (NERC) and the Department of Business Innovation and Skills.

Galliford Try was the main contractor on Halley VI, whilst Hugh Broughton Architects and AECOM provided the design for the station. The design for the research station was selected by BAS after it won the Royal Institute of British Architects (RIBA) International Competition in 2005. 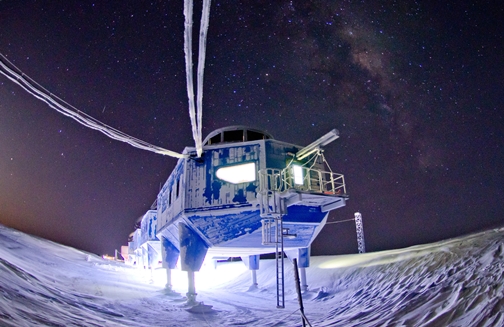 “Halley VI is a residential research station, built on the Brunt Ice Shelf in Antarctica. The station researches atmospheric science, from everything just below the surface of the ice right the way up through the different layers of the atmosphere into space. Research staff live on the station for up to 18 months at a time, so it has to provide a safe, comfortable and stimulating place for them to live and work in what is one of the harshest environments in the world.

“Looking at the history of Halley you can see how the station architecture has evolved. The first Halley Station was built between 1956 and 1957 for a Royal Society expedition during the international Geophysical Year. The first station was simply a series of timber huts built on the surface of the ice, however as the site receives approximately 1.5 m of snow accumulation each year the huts were quickly buried and eventually crushed by the weight of the snow. 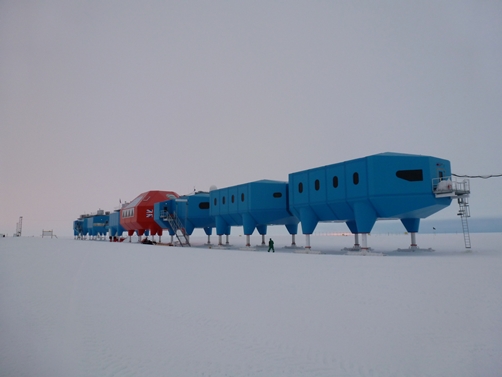 “Halley II was a similar series of huts, just larger and they suffered the same fate. Having learnt the lessons BAS decided the second generation of station would be designed to be buried. Halley III and IV were two storey stations built in steel Armco and timber tunnels respectively; both designed to be buried. Each station lasted about a decade but both succumbed to crushing forces of the ice as they got ever deeper below the surface.

“The third generation of station was Halley V, which was built on legs above the surface and was the longest lasting and best performing station, being in service for 20 years. This station though did require a large amount of support staff and effort to keep it jacked-up above the snow accumulation each year. 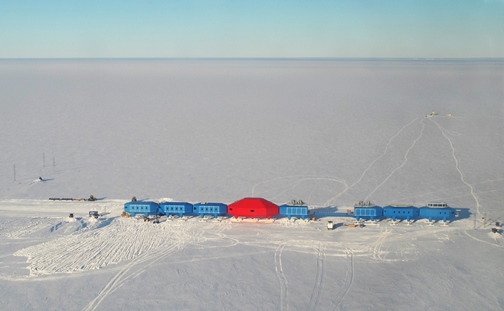 “The ice shelf on which Halley Station is located is expected to calve in the near future with Halley V on the wrong side of the calving line. This was the main driver for building the new station. Predicting exactly where calving lines will occur is very difficult so to cope with that and future calving events during the design life of the station Halley VI was conceived as a modular, re-locatable station; a fourth generation station.

“Like its predecessor it is on legs sitting above the ice but these are hydraulic legs requiring a lot less staff each year to jack up the station and keep it above surface. The station is also full of labour saving and energy efficient systems, meaning that less money is spent each year on maintenance and survival and more on the science research.”

Halley VI comprises a series of eight modules designed to meet the ever changing requirements of the science programmes and can support a crew that ranges from 52 during the summer to 16 during the winter. The station includes bedrooms, laboratories, office space, energy plants and a central two-storey recreation module. 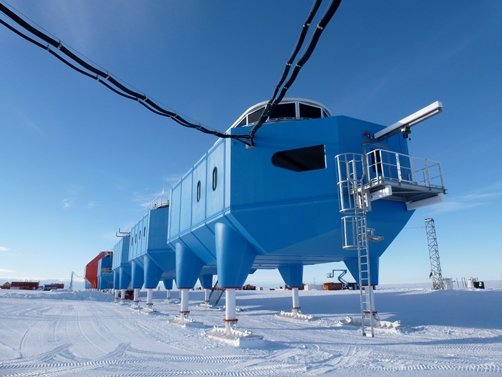 Commenting on the launch of Halley VI, UK Minister for Universities and Science, David Willetts, said:

“The new Halley Research Station is a triumph of British design, innovation and engineering. The UK’s world-class polar science community now has a unique, cutting edge suite of laboratories on the ice. The legacy of Captain Scott, together with our strong track record of scientific discovery in Antarctica, is set to continue in this excellent new facility.”

“The long-term research investigations carried out at Halley have led to a deeper understanding of our world. In half a century, society has been alerted to our changing climate, about the possibility that melting ice in the Polar Regions will increase sea-level rise, and that human activity can have an impact on the natural environment. The Polar Regions are the Earth’s early warning system – it is here that the first signs of global change are observed. This is the first summer field season for Halley and already, our scientists are working collaboratively with colleagues from the USA including NASA on studies that will gain new knowledge about how our world works. I am proud and grateful that our Government and the public recognise the importance of investing in this new research facility.” 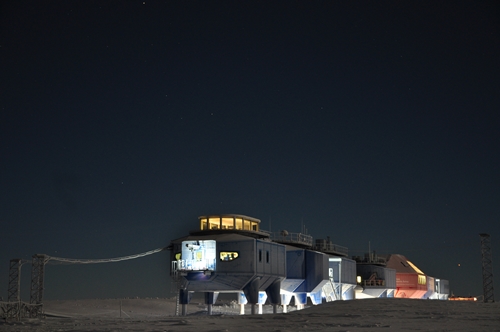 British Antarctic Survey (BAS) is an institute of the Natural Environment Research Council (NERC) and delivers and enables world-leading research in the Polar Regions. BAS has skilled staff working in Cambridge, Antarctica and the Arctic and each team works together in order to complete research that provides a greater understanding of the Earth.

“It was a fantastic feeling to be a part of the construction of Halley VI and a fantastic challenge because the work was so varied. I have previously spent a great deal of time working for the MOD and I’m used to working on projects in remote places, so I thoroughly enjoyed being involved with this project.

“Halley VI is not your average construction project; in fact it was as much about logistics as it was about construction. We were building on the other side of the world with a 10,000 mile supply chain so we had to transport everybody and everything down to that location; not just the construction materials, but all the food, fuel, clothing and sundries needed for everyday living. 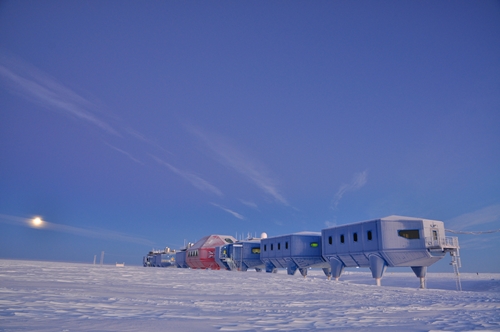 “The whole project took 9 years with the last 5 years dominated by the construction and demolition works, but construction could only take place during the short Antarctic summers (Dec to Feb). Each UK summer was a frantic round of detailed planning and procurement culminating in me heading south to Antarctica in October/November to manage the site. It was a fantastic role.”