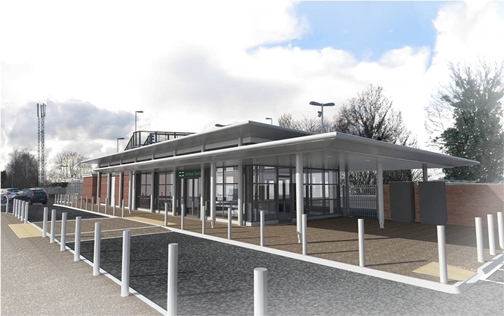 The existing station building at Ashtead was built in the 1970s. Over the years, Southern has maintained the building, carrying out minor repairs, but, limitations to the building structure meant that plans to improve facilities at the station were thwarted.

A new station building was proposed and in 2009, the Government announced that Ashtead would be one of the stations to receive a multi-million overhaul as part of the government’s National Stations Improvement Programme.

The Programme is a £150m Department for Transport backed rail industry scheme to enhance 150 medium sized stations in England and Wales.  Typically the initiative responds to the key needs of passengers, to provide lasting improvements to facilities and the overall station environments including safe, secure and comfortable stations, whilst also providing suitable information.

The new station at Ashtead focuses on improving facilities and the overall station environment.  Improvements include, a new station building with an improved layout making it easier for passengers to move around the station, particularly at busy times. A height adjustable ticket window, an accessible unisex toilet, new benches, new soft seating, automatic ticket gates, space for a retail kiosk , an Info Pod in the waiting room linked to key information websites, a cash machine, a bigger car park and a new two-tier cycle parking station.

“Our passengers will benefit greatly from the new station building. The old building has become life expired and in need of replacement. The design of the new station has come about following many meetings with Network Rail and the Ashtead Residents’ Association and the work has been planned in a way which will keep disruption to a minimum which is great news for our passengers.”

Southern worked closely with the Hassocks Amenity Association Rail Group on the design and finish of the new station which will be of a modular design. The new features are similar to those listed for Ashtead Station.

While the old building is being demolished, a temporary ticket office is open for passengers to the left of the existing station building. Once the new building has been completed, Network Rail will be installing lifts in the subway to give passengers step-free access to the platforms.

For more information about the developments visit: www.southernrailway.com.