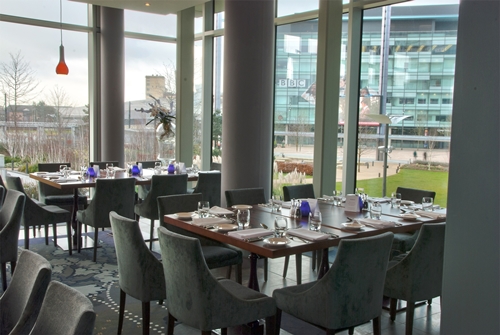 Set in the vibrant heart of MediaCityUK is the new offering from award winning restaurateurs Steve Pilling and Simon Stanley.

Damson is located adjacent to the new North West BBC base and is adjoined to Salford University’s Media Department. With its deep purple interior, suave lighting and refined wine displays, the 140-cover Damson oozes sophistication and looks set to be the restaurant of choice for some of TV and Radio’s biggest stars.

Despite the glamorous surroundings Steve Pilling and designer Don Hobson have kept their feet firmly on the ground, by making sure that the restaurant is affordable for all and also by developing strong ties with Salford City College and its Future Skills Centre.

Speaking about the ties with Salford City College, Steve said:

“As for our relationship with Salford City College, Damson will be the perfect environment for students to truly learn and master their craft as well as gain knowledge on the increasingly important elements of running a sustainable and environmentally-friendly kitchen. 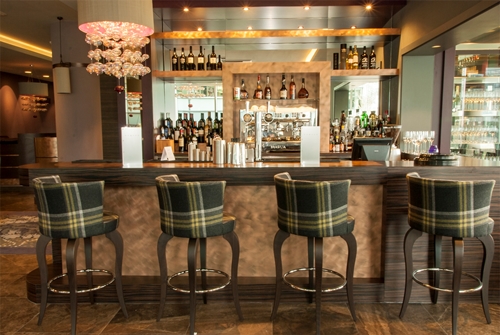 “It’s great news for young people with career aspirations, the North West hospitality sector and the industry as a whole. Last year five of our young people went off to work in some of the best establishments in the country if not the world.

“Our expertise in running, owning and developing high quality restaurants has, I trust, brought a new and personal dimension to the project.”

Steve also went on to stress the importance of designer Don Hobson to the Damson brand, he said:

“Don is a creative genius and we really enjoy working with him on our projects.” 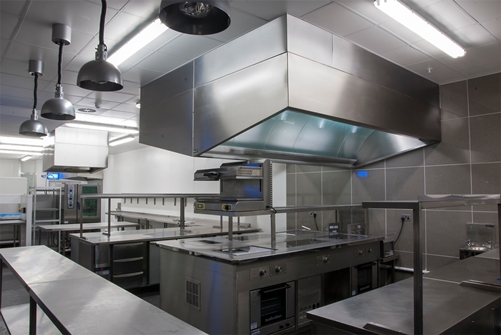 Don himself took time to give Premier Hospitality an exclusive insight into the Damson story, he said:

“I had previously worked with Steve on Sam’s Chophouse in Manchester and he approached me to work with him on a new brand a few years ago. We pooled ideas and found a relatively small site in which we could trial the concept and the food, from that we developed the original Damson in Heaton Moor, Stockport.

“From there the restaurant grew in popularity and we decided the time was right to create another venue closer to the city centre.

“What attracted us to this particular site in MediaCityUK was the association with Salford City College who are developing the Future Skills Centre nearby. Also, MediaCityUK is an exciting development and we decided it would be a really great opportunity to take the Damson brand into the next stage here.” 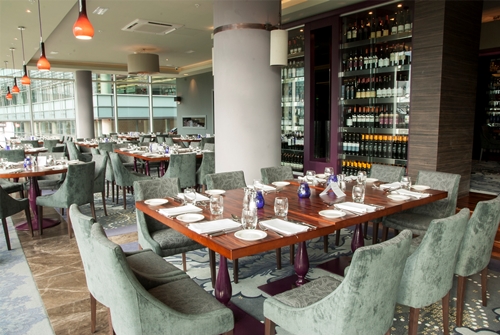 Don went onto talk about what visitors can expect at the new Damson, he said:

“People who have visited the Damson in Heaton Moor will feel at home when they visit, however as this is a bigger venue there is more opportunity for Head Chef Simon Stanley to experiment with new dishes.

“As with the first Damson, food is of a very high end offering but at a relatively affordable price in order to attract a good mix of people. Since the restaurant has been open it has received great feedback on both design and the menu.”

Diners can sample dishes such as the veloute of leek, potato & smoked haddock to start and the spiced cauliﬂower risotto, aubergine chutney, curry oil & cumin salt for main at just £15.95. Or if you are feeling a bit indulgent why not substitute that starter for vanilla cheesecake, with nut brittle and salted caramel sauce. 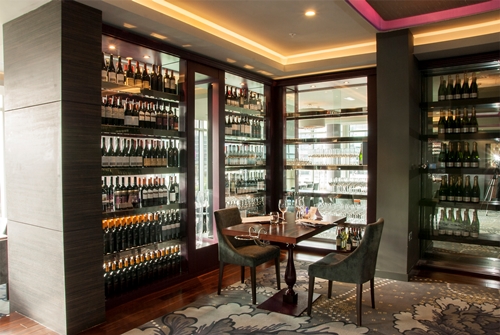 Working with Don, Steve & Simon to create this fabulous new addition to the Damson family was Greater Manchester-based contractors Dawnvale.

The company helped to create and install one of the UK’s ‘greenest’ and most advanced low-energy commercial kitchens.

In addition to the commercial kitchen, Dawnvale also designed and fitted the new bar, marble floors, bespoke wine displays, a feature drop down ceiling with LED lighting as well as supplying a range of high quality furniture for the restaurant.

Dawnvale’s credentials and outstanding reputation in the hospitality sector span over 30 years and other notable recent projects include TGI Fridays, Hawksmoor Restaurants and the Chaophraya Group. 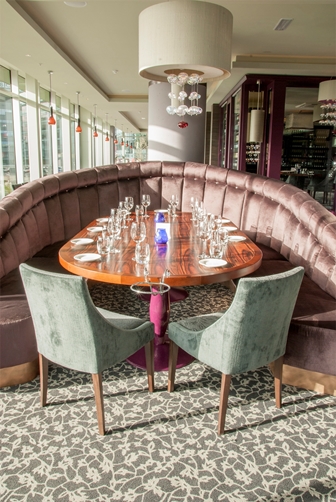 “This is undoubtedly one of the most exciting projects Dawnvale has ever been involved in. Every single aspect of the design and build has been created using ‘next-generation’ thinking; we have pushed all the boundaries to harness the very best products available to meet our sustainable and low-energy approach.”

For more information about the restaurant or to book your table with the stars then visit www.damsonrestaurant.co.uk.