A project to restore Bradfield College’s The Greek Theatre is underway.

In 2009 Bradfield College closed The Greek Theatre when it became clear that certain areas of the building – including the staircases and entrances – were no longer structurally safe. With the Theatre out of operation, the College decided to take the opportunity to refurbish the building, in order to restore it back to its former glory.

Work began on the project in April 2013 and is currently scheduled to reach completion in September 2013. Studio Octopi is providing all architectural services on the restoration of The Greek Theatre, whilst Feltham Construction is the main contractor and Andy Gray is its project manager. John Layfield and Stuart Hawkes of Synergy Construction & Property Consultants are providing quantity surveyor and project co-ordination services.

“The Greek Theatre was created in 1890 by Dr Gray, the then headmaster, who wanted to make the most out of a disused chalk pit. The headmaster decided that the space should be put to better use, so decided to transform the site into what became The Greek Theatre, excavating it to form an amphitheatre on the model of Epidaurus. 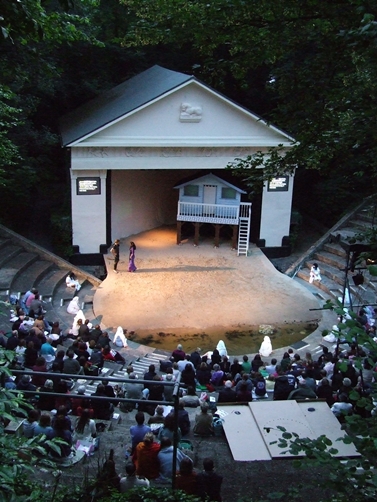 “Traditionally, every year a major summer production is held at the Theatre, whilst every three years a Greek play is produced, using the ancient Greek language and traditional Greek costumes.

“The Theatre is owned by Bradfield College, is located within its grounds and to my knowledge is one of only three Greek theatres in the country; so it really is a rare facility.”

“So many people believe in preserving this part of Bradfield’s history, that the project has received over 550 individual donations from former College pupils, parents, staff, trusts and local residents, which has helped to get this restoration programme off the ground. This is such a fantastic achievement.”

The design for refurbishing The Greek Theatre is being provided by Chris Romer-Lee of Studio Octopi. The design keeps the atmosphere and flavour of the Theatre – including the concrete seating – whilst at the same time updating key areas. 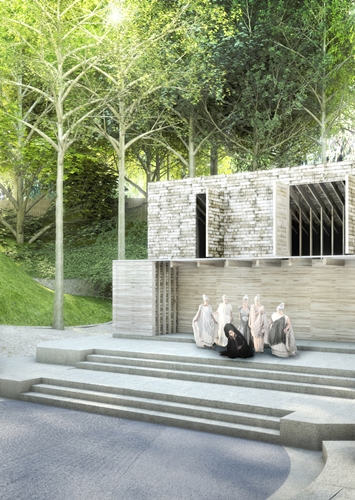 “Chris came up with a design which received a very enthusiastic response, so as soon as the money for the restoration was raised it was decided that the project should proceed using his design.

“We want the Theatre to continue to exist as it always has, we certainly don’t want to turn it into something it is not and Chris’ design reflects this perfectly.”

Chris attended Bradfield College more than twenty years ago, so his involvement was not only a fantastic coup for the project, it was almost written in the stars. Chris approached the College, keen to show them what his practice could do, and after putting forward a great proposal was given the task of redesigning the Theatre.

“We were asked to put forward an initial proposal on how we would resolve the issues that had closed the Theatre, with access being a key focus. Out of all the architects who put forward proposals we were the only practice that came up with a solution that introduced high-level walkways to access the Theatre and this was something which grabbed the College’s attention. However when this concept proved to be a bit too costly, we developed an alternative solution, which is better suited to the requirements of the college.

“We are introducing a piazza at the top of the Theatre that opens up onto a grand stair, which then drops onto a new walkway on the top two tiers of the concrete seating. The walkway is 270˚ and guides visitors around the amphitheatre.” 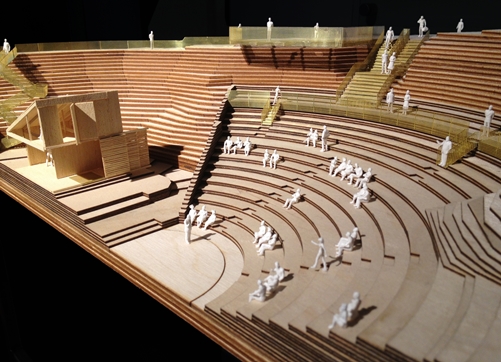 “Back in 1987 I was painting the sets on a production of Love Labours Lost and now my team and I are creating a simple solution to a very complex problem. This isn’t a traditional theatre, so it brings many challenges and getting this work complete will be a real triumph.

“Bradfield College has made it clear that this new Theatre is a facility for the whole community, whether it’s a Shakespeare play, a musical or a rock concert, so it has to be accessible and inviting for all.”

Work continues to make great progress on the refurbishment of The Greek Theatre, with everyone involved – along with many well wishers – eagerly waiting for the new Theatre to be unveiled.

“The project has got its own unique challenges and as the Theatre is situated within the centre of a working school, safety is of course a key focus. However, Feltham Construction has been fantastic and have approached the project with a clear idea on how to combat any potential problems.

“The Greek Theatre is very well known in the local area and the restoration of this site is being embraced by the whole community. This restoration will provide an incredibly exciting performance space and if it can remain in operation for as long as the old Theatre did – which lasted for 120 years – it won’t be doing badly.

“As Bradfield College Bursar I had the unfortunate task of advising governors to close the Theatre when it was no longer a safe structure, so seeing this restoration completed and the Theatre reopened will give me enormous pleasure.”

“Being in a production in the Greek Theatre has been part of the educational experience of past pupils. I and the College staff are delighted that, as a result of the generosity of Old Bradfieldians, future pupils will be able to enjoy the same educational and dramatic experience. The College will be putting on a Greek play in ancient Greek in the summer of 2014.”