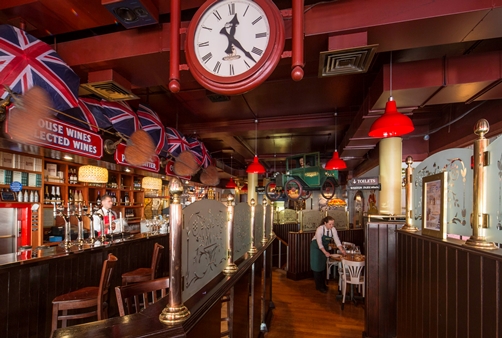 Established in 1979 by The Earl of Bradford, London-based Porters English Restaurant showcases some of the finest English cuisine, as well as some of the country’s most loved classic dishes.

Following an extensive refurbishment the restaurant now boasts a stunning and quirky design scheme which is steeped in British iconography, in addition to an extremely impressive menu.

The Earl of Bradford opened Porters English Restaurant with the aim of providing reasonably priced real English food and throughout the restaurant’s lifetime this is something he’s remained committed to. The recent refurbishment was undertaken to continue this ethos, whilst at the same time taking the restaurant to a new crowd of customers.

Commenting on the recent refurbishment work, The Earl of Bradford, said:

“Porters English Restaurant has been open for 34 years and within this time we have attracted some fantastic longstanding customers, however we became aware that we needed to appeal to a younger demographic in order to remain at the top of our field.

“In order to do this we gave the restaurant a new look; altering the colour scheme, the materials on the banquette seating, the blinds, the lighting and even giving the waiters new aprons to reflect the redesign.

“The new design scheme is a bit more humorous and lighter in tone than before, making for a pretty comprehensive alteration to the restaurant.” 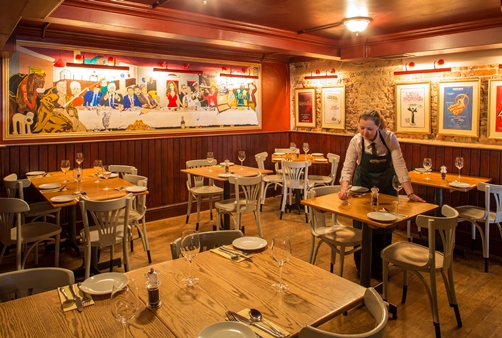 “Work began on the project in late 2012, with design and building work undertaken in-house, and was completed in May 2013.”

Thanks to the refurbishment, Porters English Restaurant’s overall look and feel has been truly transformed from a gentleman’s library into a more contemporary establishment. Features include nods to Doctor Who – in the form of the Doctor’s time travelling Tardis – as well as a take on the famous Last Night’s Supper painting, which features 17 British celebrities.

The bar has been reworked and modernised to include a stylish stainless steel finish, alongside eye-catching artwork. Meanwhile, guests at Porters English Restaurant can also feast their eyes on a contemporary take on the Union flag, a Britannia mural and images of classic comic characters such as Billy Bunter and Desperate Dan.

The Earl of Bradford, said:

“The redesign of Porters English Restaurant has been absolutely vital. This is a very competitive industry and we must ensure that we appeal to a greater cross section of customer moving forward.

“We’ve received some great feedback, with people already making comments on the new design of the restaurant.”

Porters English Restaurant has two impressive private rooms, providing the perfect setting for organised private events, gatherings or parties. The first room, dubbed the Gallery, can accommodate up to 40 guests, whilst the second room, which is located downstairs, can cater for a further 100 guests.

The menu at Porters includes a fine selection of warming and nostalgic British starters, from Miniature Yorkshire Puddings with Flaked Smoked Mackerel and Creamed Horseradish, to a warm Scotch Egg. As the restaurant also has a reputation for its world famous pies, expect to see the likes of the Three Bean, Spicy Lentil and Vegetable Pie, popping up alongside classic dishes such as Toad in the Hole, Steak and Kidney Pudding and Beer Battered Cod. 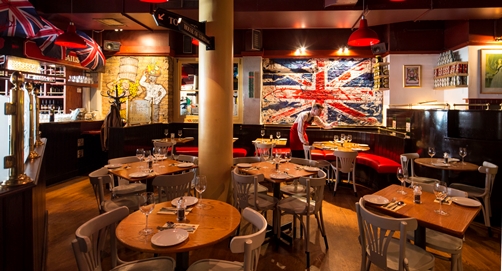 Those with a sweet tooth will find much to enjoy at Porters, with homemade ice creams dished up in flavours that include Maple Syrup, Lime Marmalade and Banana Cinnamon & Rum. Meanwhile, the remainder of the desserts menu includes a mix of hot and cold dishes from treacle tart and Eton Mess, to Summer Pudding and Spotted Dick.

For those who wish to learn a few more secrets from Porters English Restaurant, the venue has two cookbooks available, which detail how to create their delicious creations. The books – Porters English Cookery Bible and Porters Season Celebrations – are available from the restaurant.