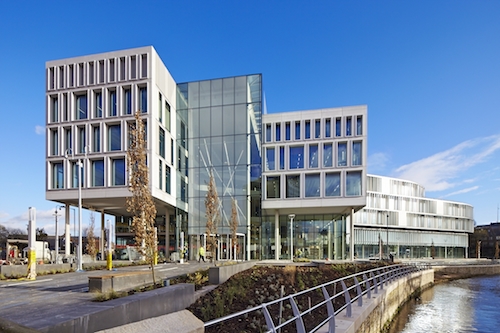 Number One Riverside is a state-of-the-art civic building, situated in the heart of Rochdale.

Since the building opened it has received fantastic feedback, and recently picked up two prestigious awards – the Greater Manchester Chamber of Commerce Building of the Year Award 2013 and the Concrete Society Award’s Best Mixed Use Building 2013.

“We had judges here in Rochdale looking around the building, examining everything from the design to the use of materials. For the Building of the Year award judges were as much looking at the design as they were the functionality of the building; was the building working as it was originally designed? Getting awards like these are a positive achievement as it is great recognition for the borough and demonstrates we can deliver high quality design alongside a building that the people of Rochdale can be proud of. 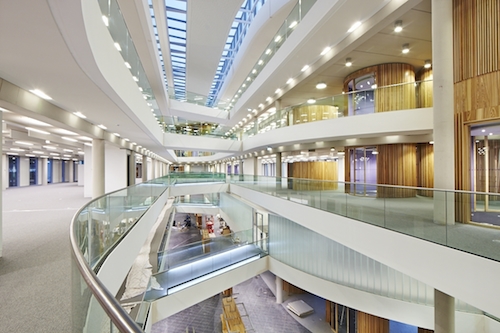 “Number One Riverside is a £50 million investment for the borough and is seen as an iconic building. The feedback from local people has been very positive. Everyone coming into the building for the first time is impressed by the design and scale.

“We wanted this to be a building for our residents as well as our staff. The building is open to the public six days a week and we have held a number of events during weekends and evenings, including a major literature festival.”

Number One Riverside is an open-plan, five-storey, municipal building. The development provides office space for over 2000 Council employees, partners and tenants, alongside a number of facilities for the local community.

The ground floor of the development comprises a customer services centre, state-of-the-art library and coffee shop, while half of the first floor is used as a training and conference facility. The remaining floors are utilised as office space and include a series of meeting areas for staff.

The development was a significant addition to the borough, becoming a catalyst for the wider physical regeneration of Rochdale town centre which included the construction of a new transport interchange – which has just opened to the public – the arrival of Metrolink – on track to arrive in Spring 2015 – and a forthcoming retail and leisure development.

“Number One Riverside is more than just a building; it is paramount to the regeneration of both Rochdale Town Centre and the wider borough.”

Work began on Number One Riverside in April 2011 with Sir Robert McAlpine as the main contractor and FaulknerBrowns as the architect. 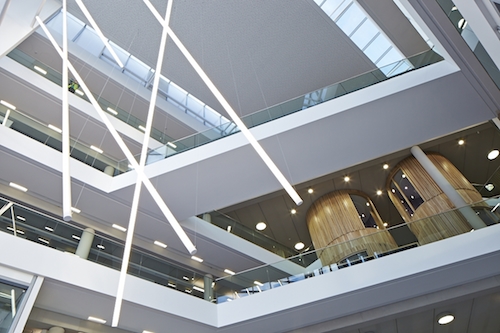 Number One Riverside is a one-off development, which is effectively two floor plates running parallel with a central atrium between. The two sides of the complex are linked together by bridges to create a bright open space within the development which was designed to follow the contours of the River Roch.

The development was built using a reinforced concrete frame which was supported by precast concrete driven piles and incorporated a membrane roofing system. The external facade comprises a mix of Reglit glazing, precast concrete panels, fibreC and aluminium.

The sustainability of Number One Riverside was a very important aspect of the project and so all efforts were made to ensure the development was as cost effective and environmentally friendly as possible. A bio-mass boiler powers the development, while solar shading eliminates the need for air conditioning. Greenwater storage tanks are housed on the roof to harvest rainwater. This has resulted in the building obtaining BREEAM Excellent status. 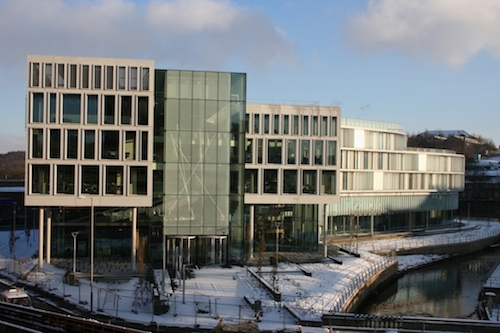 Number One Riverside includes a paved area, plants and concrete seating, as well as a secure storage area for 100 bicycles, in addition to 19 DDA compliant parking spaces.