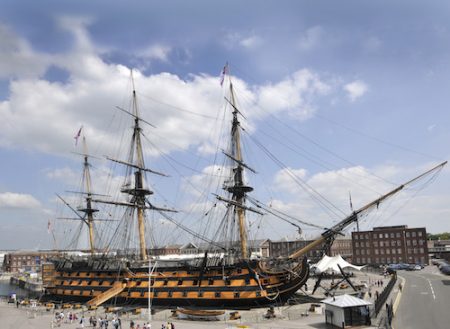 A fifteen year project to restore the infamous HMS Victory; Nelson’s flagship which is best known for her role in the Battle of Trafalgar, is well underway.

The restoration team are currently planning the next phase of works to install a new support system in the ship in order to arrest movement in the hold. As well as this the team are also working on plans to dry the ship out.

In March 2013 ownership of HMS victory was passed form The Royal Navy to The HMS Victory Preservation Trust, which is part of The National Museum of The Royal Navy. Premier Construction caught up with Andrew Baines, the Curator and Project Director for the HMS Victory restoration project, to find out more.

“We knew the ship was in poor condition when we received her and The Royal Navy had estimated that £45 million worth of work would be needed over the next 10 years to return her to a sustainable condition.

“We treat Victory as we would treat any other museum artefact; so our first job was to stabilise the ship and stop things getting worse. The biggest problem initially was rain water getting into the ship and causing lots of rot and damage. We addressed this by corking the ships decks and painting the holes which was an expensive job. We spent about £1 million in the first two years addressing water ingress issues.”

Andrew told us that the next step for the restoration team was to try and understand the ship in terms of its history. An archaeological study was commissioned and the team began a process of structural analysis. These studies examined the ships fabric by looking at the various marks on the timber elements including the beams, knees and ledges to ascertain the dates they were installed and their measurements. This process helped the team to fully comprehend how HMS Victory has been built and maintained over the past 200 years.

The team are working alongside BAE Systems, under a prime contractor arrangement, who undertake the schemes project management. Fenton Holloway, structural engineers, are also an integral part of the project. The scheme is currently costing £2 million each year and Andrew estimates that once work gathers pace the yearly outlay will be closer to £3 million.

The restoration team have also analysed the ships painted surfaces to ensure that the way they are displaying the ship is an accurate representation of the period in October 1805, when it was originally built. The paint analysis also helps the team work out the age of various parts of the ship.

The method of dendrochronology has also been utilised in order to understand when specific bits of timber, which comprise the ships structure, were cut and also where they came from. Andrew said that there are parts of Victory which date back to every single year of her existence. This process was important as it allowed the team to maintain and conserve the more historic aspects of the ships structure.

A complex laser scanning process has also been undertaken to allow the team to build an accurate plan of Victory. The scanner took 500,000 measurements a second which have all now been recorded over the past eight months adding weight to the team’s structural analysis process.

The scanning report uncovered that Victory’s most pressing issue is the way she is supported in the dry dock. Currently she is propped up on 22 individual supports and this is causing the ship to fall in on herself. Addressing this problem is where the restoration team find themselves at the present time.

As the entire restoration process is a case of uncovering the unknown, Andrew says that they do not have a firm idea of how long the project will take to complete. The team are also keen to keep Victory open during the works; Andrew said this is extremely important as Victory’s story throughout her life has been a story of repair.

He said that he is delighted to be leading this project:

“Anyone you speak to who is involved in this project is aware of what a privilege it is. It is very tough and demanding but is also hugely satisfying. We are doing something very different with regards to our approach to restoring Victory and we are committed to ensuring she is around for another 200 years. We know we have to make the best informed decisions for the ship.”

CMCS Ltd are a specialist automatic monitoring firm which record and analyse the movement of various structures over long periods of time. The firm mostly cover tilt and movement but also do vibration, strain and pressure. The team are not at all rigid in their business approach and have monitored an array of structures since their inception 20 years ago including buildings, dams, bridges, tunnels, piles and ships to name but a few.

“We offer a very niche service where we connect very small sensors onto structures, measuring the size of a pocket watch; these are cabled over to a data logger which picks up all the data. The data logger is a radio logger which sends the data out to wherever required before it is fed through our bespoke software; Logsafe.”

CMCS Ltd’s specific involvement in the HMS Alliance restoration project involved the monitoring of the submarines two concrete cradles. The Royal Navy Submarine Museum wanted customers to be able to walk underneath the structure as well as over it and so decided to insert sheet piles into the sea bed and fill it with gravel to enable customers to walk on the surface.

“The team were concerned that putting the sheet piles in would make the ship rock, the cradles move or cause parts of the sub to fall off. So we installed some of our sensors onto the concrete cradles to detect any movement and record levels of vibration.

“It is always good to be involved in historic projects; this scheme also showed our versatility and proved how we excel above our competition. We pride ourselves on our flexibility and how quick we are to react to circumstances because of our size. We are also able to do bespoke and different designs which our competitors struggle with, as well as being very cost effective.”