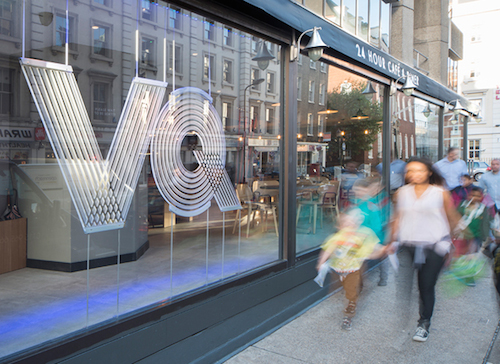 VQ Bloomsbury, a 24-hour café and diner, and reached the early nomination stages of the Restaurant and Bar Design Awards for its impressive design.

The venue opened in October 2013 and is the second addition to the VQ brand, which launched its successful debut branch in Chelsea.

Located on 111A Great Russell Street, in London VQ Bloomsbury is extremely accessible as it lies near Tottenham Court Road and Goodge Street Tube stations. VQ, which stands for Vingt-Quatre, is a buzzing 24 Hour Café and Diner serving reasonably priced, delicious food throughout the day and night.

The recently refurbished new venue has a set menu available from 12 noon through until midnight where diners can enjoy two courses for £11.95, or three courses for £14.95. The set menu is available every day and comprises a delicious selection of starters, mains and desserts. Dishes include Pumpkin Soup with Truffle Oil, Haddock Goujons, Mushy Peas, French Fries and Tartar Sauce, as well as Warm Chocolate Brownie with Vanilla Ice Cream or Apple Crumble and Custard.

A more extensive 24-hour menu is available throughout the day for those wanting to splash out which includes an impressive selection of starters, mains, desserts. The all day menu is split into the following sections, spoiling diners for choice with an array of breakfasts, omelettes, burgers, hot dogs, sandwiches, salads and pasta, sides, sharer dishes, hot drinks, iced drinks, as well as virgin cocktails.

The venue is situated in a ground floor unit of St Giles Hotel in Bloomsbury and is directly linked to the 720 bedroom hotel by a corridor. Despite this, the new restaurant is completely self contained and will trade separately. The 120 cover venue spans 3,700 sqft and is almost double the size of the original VQ venue in Chelsea. The VQ chain opens its second venue after almost 18 years of opening its first. Funding for the second site has been acquired from existing shareholders and RBS.

The VQ brand is looking to expand over the next few years and are looking for a third site in Shoreditch, East London or in the Southwark area of the city. Ultimately the brand hopes to branch out to other major cities in the UK including Brighton, Manchester, Cardiff and Bristol.

The venue has an 8am until 2am alcohol licence despite being open throughout the night. Many of the restaurants existing staff from the Fulham Road branch will transfer over to VQ Bloomsbury including general manager Elise Sanz and executive chef Richard Brooks.

Simon Prideaux, Managing Director of VQ Limited, played an integral role in the project of VQ Bloomsbury, working alongside main contractor DG Professional Interiors led by Director Alan Masters. Paul Nulty Lighting Design and Solus Ceramics Ltd were also instrumental to the project offering their expertise throughout. Specification consultant Domus and Light Emissions played a crucial role in the creation of this new venue.SCP contracts provided furniture for the space.

I-AM, a multi-discipline design agency and brand experience consultancy, were instrumental in the creation of VQ Bloomsbury. The firm employs an experienced group of interior designers and architects and creative digital teams and so were ideally placed to create the second VQ destination.

Simon Prideaux, owner of VQ, came to I-AM with a brief to rebrand and redesign his legendary 24-hour dining concept. Customers range from families at lunchtime, to tourists stopping in for afternoon coffee, and clubbers in the middle of the night. VQ has to function differently for each of these customers, and this had to be understood and incorporated into the design and experience.

The design focused on how light and shadows change in a space through 24 hours and ways in which it moves across different materials, which range from sandblasted glass, to timber. The venue is divided in zones, each with its own ambience. Through subtle changes in lighting, I-AM had to reflect different moods: from calm in the afternoon, to energetic at night. An 8m light installation was introduced, stretching across an entire wall, displaying images of ‘London life’. The walls are made of sandblasted glass and tinted in different shades of grey to add depth and texture. ‘Time’ is also a subject, with digital projections of clocks drawn onto a patterned wall: lines are a defining feature of VQ, and are etched across ceiling and walls to create movement across the space.

In terms of exteriors, I-AM re-furbished the existing shop front. They also introduced the new VQ logo, which is lit and becomes the focal point of attraction in the frontage.

Customers frequently comment on the ‘wonderful feeling’ created by the bespoke lighting. The space is not only stylish and contemporary but also functional, comfortable and welcoming to all people at all times.

The work began in June 2013 and completed in October. James Coats of I-AM was Senior Designer on this project and Jon Blakeney the Director.

The firm was formed in 2009 and since their inception has worked with an array of prestigious clients. Projects include Siemens Crystal Visitor and Brand Centre, in London and General Electric Innovation Centres in Saudi Arabia and UAE. Light Emissions have also worked for Silicon Sentier helping to create their Tech Incubator Hub in Paris, as well as undertaking works on the Tower London and QCV’s new television studios in West London.

Most recently Light Emissions has worked alongside DGP Interiors on the VQ Bloomsbury project. The firm designed and supplied a nine metre long LED ‘Graphic Wall’ to the venue, devising a unique solution to integrate true video into a lengthy wall and 12 angular lightbox shapes. The very powerful individual LED pixel dots have been fitted on the back of the lightbox shapes, with heavy textured glass paneling and a dark acrylic diffuser.

The firm fitted the screen behind heavy glass paneling and so ensured that the product was reliable and operated automatically, as the restaurant is open 24 hours each day and there are no technical staff employed at the restaurant.

“The challenge was to run separate video media in each of the shapes, without light leaking between them. Additionally the designers had taken video of London street life and wanted to run these video images across the whole width of the screen.

“This was a most gratifying project on many levels. Firstly, working with Paul Nulty Lighting Design and I-Am, as a great delight, and we expect to keep up the association and develop further interesting and challenging projects. It was a great test to achieve multiple ‘angular shaped’ video areas with an overall video layer running across the whole screen. The result is a constantly and subtly moving very low resolution images that does not distract the diners. It takes a little while to come to the realization that the screen shows images taken from London streets with taxis, pedestrians, buses and buildings floating by!”

Peter said Light Emissions are very proud of taking ‘creative’ LED video technology and developing it to have long life, reliability and affordability needed for permanent installations. The firm is especially proud because engineers are not required to service the equipment after the show has finished.