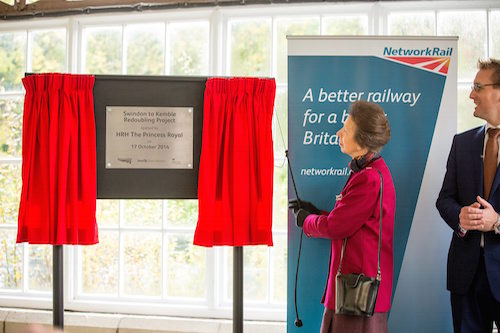 Site works began on the re-doubling aspect of the project in 2013 and have completed in August this year following an extensive renovation scheme.

Initial works involved the slewing of tracks in areas where it had moved to the centre. Once this had been undertaken the on site team were able to undertake more conventional track installation and track relaying activities.

The next programme of works involved excavating the site and clearing room to install the second line. By August 2014 the job had been completed and all of the lines were reconnected; in total 12 miles of new track was installed and level crossing works were undertaken.

Ross Mahoney said the team encountered numerous difficulties during the scheme. He added:

“One of the major challenges during the scheme was obtaining materials and haulage during the project; as these internal services are already stretched. We worked hard with our internal supply chain colleagues to achieve the programme which had been set out.

“We also had to integrate other programmes of work that were ongoing. A signalling scheme was underway as well as our project and so we have actively worked together and treated it a s a single programme to ensure it all worked well. We had a mature approach to prioritisation and integration.”

With regards to the importance of the Swindon to Kemble Redoubling scheme Michelle Scogings, Senior Programme Development Manager at Network Rail, said:

“This project is very important for us. There was a big drive from Network Rail to create a secure, robust diversionary route to South Wales for the Paddington South Wales service when the main route via Bristol Parkway is closed for engineering works. There is a lot of major works coming up over this control period so it was important to all our stakeholders that we could keep passengers on trains by provision of a robust diversionary route.

“A single line is a constraint to future planning and so we needed to be thinking of the long term when we build things. Before we begin the intrusive sites in Bristol we needed to have our diversionary route ready to take the additional traffic.”

Many of the delays that occurred on the route were caused by more than one train needing access to a single line. Now that the track has been redoubled this factor has been significantly reduced. As previously mentioned the project the Swindon to Kemble now provides a critical diversionary route while some of the other major investment projects, such as electrification, are delivered across the Great Western Main Line. Trains now have an alternative route to use during routine maintenance works to the Severn Tunnel.