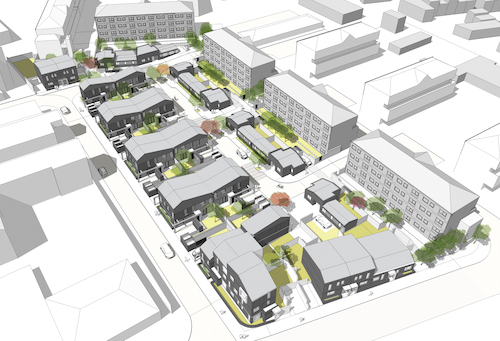 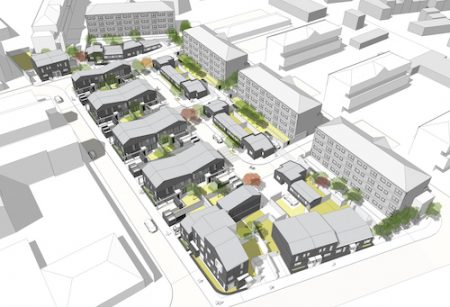 A major housing regeneration scheme which includes the construction of 30 energy efficient, affordable homes is breathing new life into the Lower Falinge neighbourhood in Rochdale.

The project is being carried out for Rochdale Boroughwide Housing (RBH) by Rochdale-based main contractor The Casey Group with OMI Architects. This is the largest of 3 schemes that P.Casey has carried out for RBH.

New homes on Redcross Street and Waterhouse Street are being built on the former site of two 18-flat maisonette blocks (Cartmel and Frieston) and an adjacent public house (the Abbey Inn), all of which were demolished at the start of the contract.

Fittingly given that RBH is a mutual society co-owned by tenants and employees, the regeneration includes new housing along the historic Toad Lane, the birthplace of the Co-operative Movement where the Rochdale Pioneers opened their first store in 1844.

All the homes are all being constructed to Lifetime Homes standard and are arranged in 11 blocks around a landscaped ‘home zone’ area while each of the dwellings will have its own enclosed private garden to the rear. 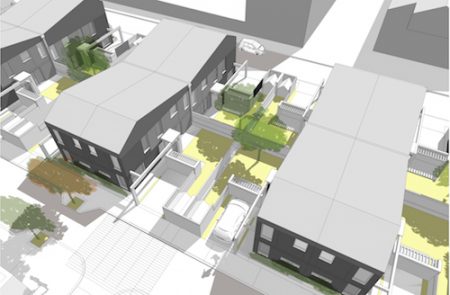 Chris Casey, Managing Director for The Casey Group, said: “We are delighted to be working with Rochdale Boroughwide Housing on the Lower Falinge project. As a Rochdale-based business, directly employing over 300 people in the region, we are proud to be creating communities where local people feel empowered, a principle which is at the heart of our company ethos.”

“The removal of the Cartmel and Frieston blocks is a big change for Lower Falinge and this redevelopment sends out a very positive message about the future of this neighbourhood.

“The well designed and warm new homes will be at the heart of the local community and will provide a more diverse range of home options in an area that currently only provides one and three bedroom flats.”

David Rodgers, the former International Co-operative Alliance housing president, said on a visit to the site: “The Rochdale Pioneers would be cheering at the idea of co-operative homes on Toad Lane, and this scheme shows that their legacy lives on.”

Rochdale Boroughwide Housing (RBH) is the UK’s first tenant and employee co-owned mutual housing society, with over 13,500 homes throughout the local area.

Drawing on the Rochdale’s rich co-operative heritage, RBH’s unique model places members at the heart of decision-making allowing everyone concerned to enjoy a sense of security and belonging in places they make great together.