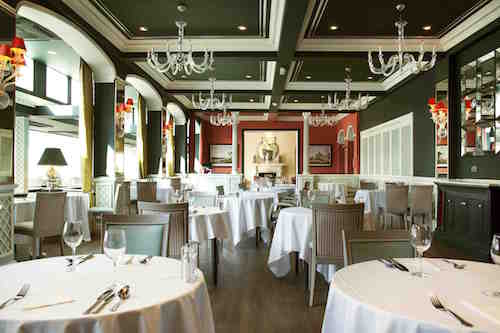 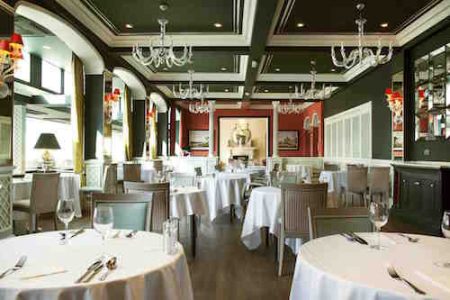 The Bromley Court Hotel in Bromley, Kent, has relaunched its 180-cover restaurant following a major refurbishment and menu revamp.

The Garden Restaurant has been given a lighter, brighter feel to make the most of its outlook over the south London hotel’s two acres of landscaped gardens.

As part of the hotel’s re-launch a broader, modern menu has been designed to appeal to casual diners, as well as be more suitable for formal occasions.

The historic 115-bedroom Bromley Court Hotel, a popular conference and wedding venue, has been owned since 1931 by the family of its current chairman, Clare Acker. In the 1960s it was a celebrated jazz venue hosting the likes of David Bowie and Jimi Hendrix – who started his tour at the hotel before playing Chislehurst Caves.

The hotel is independently-owned and was built in 1801 by Baron Farnborough and converted to a hotel in 1931 by businessman Leon Frenkel. The hotel has a rich and varied history; during World War Two it was used as a base for fighter pilots, and after surviving London’s blitz, the hotel received a visit from Prime Minster Harold MacMillan, who held a cabinet meeting there while he was MP for Bromley.

In the 1940s the hotel became a popular jazz venue featuring artists such as Acker Bilk, Eric Clapton and Cream and Pink Floyd.

Today, the 115-bedroom hotel is a popular wedding and conference venue as well as somewhere to meet, stay and dine for both locals and tourists to the area.

Under newly appointed Managing Director Max Ball the Garden Restaurant is being aimed at local diners as well as business and leisure guests. Guests can enjoy delicious meals ranging in price from Spend £13 for a sharing board to £25 for a three-course meal.

“We want the restaurant to develop a great reputation within the Bromley and South London area, which is why it’s been redesigned with a brasserie feel that’s more accessible and lends itself to any occasion. We offer sharing platters and small plates as well as full three-course meals, and want people to feel they can drop in for something to eat or a drink – whether it be morning coffee, afternoon tea or an early evening cocktail.”

During his career Stephen has cooked for the Duke and Duchess of Cambridge, as well as for the Embassies of Japan, Russia and Saudia Arabia. The hotel’s talented Head chef also personally planned and cooked at the wedding of Jools Holland.

The redesign of the restaurant has been led by interior designer Joe Hoare, based in Tunbridge Wells, and forms part of an ongoing refurbishment of the building, which sits in a strategic position on Bromley Hill with views of several London landmarks.

“It’s an exciting time for The Bromley Court Hotel and I’m looking forward to being part of the upgrading of this very historic property.”

The restaurant was officially unveiled at a launch party on the 23rd April and was attended by over 250 local business leaders with the red ribbon cut by Mayor of Bromley Julian Benington.

Guests can enter the Garden Restaurant via the cocktail bar and, if they choose to, enjoy an aperitif overlooking the South facing hotel gardens and terrace before their meal. The restaurant is home to the hotel’s friendly and experienced team who are happy to serve diners from both the restaurant’s fixed and a la carte menus.

Smart Interiors Ltd specialise in interior refurbishments and fit out works in the hospitality sector working across a range of high end hotels in London. The firm also undertakes numerous commercial and private projects but focuses mainly on hotel renovations, revamping a range of restaurants, bedrooms and hotel public areas throughout London and the UK.

Despite being based in Derbyshire the firm’s main client base is in London city centre. Since their inception 10 years ago the firm has worked with a number of high profile clients including Splendid Hospitality Group and the InterContinental Hotel Group, owners of Holiday Inn and Holiday Inn Express.

Smart Interiors Managing Director and Owner Rex Beech, who has 30 years experience in the industry, told us about the firm’s most recent work at Bromley Court Hotel in Kent. He said:

“At Bromley Court we have refurbished all of the bedrooms in the hotel and the restaurant, acting as the main contractor on the scheme.

“It is important for us to be involved with this project because of the profile of the hotel in the area. It is also important to bring the hotel back up to the right standard as one of the best hotels in Kent; it is crucial for the hotel, and for us, to achieve a standard we can all be proud of.”

Rex said: “We pride ourselves on our ability to deliver great customer service and quality products, as well as providing the flexibility and care required to operate in the high class hotel environment.”