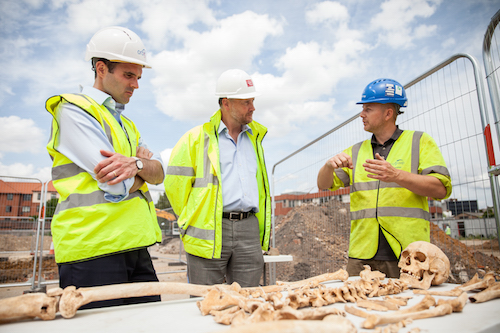 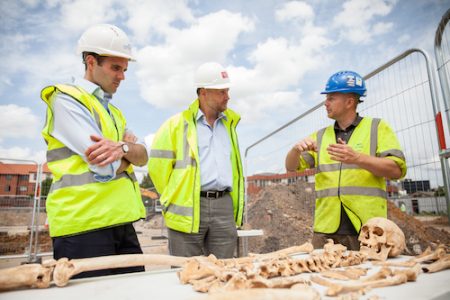 Treasure dating back to the 14th century has been discovered by archaeologists working on a £70million development site in Norwich.

Human remains, pottery, coins, oyster shells and painted glass are amongst the findings uncovered by archaeologists, who began the excavation in May, at the St Anne’s Quarter site.

Orbit Homes, which is developing more than 400 homes on the site, has appointed Norwich Property Services (NPS) Archaeology to ensure finds are recorded and preserved.

Amongst the most treasured items discovered is a silver-gilded dress fastner, known to be at least 300 years old, which is likely to be declared as treasure trove.

Max Barnes, construction project manager at Orbit Homes, said: “It’s incredibly exciting to have discovered these historical artefacts, including some treasure. We know a lot of activity took place at this site in the Saxon era, so these items are helping us to build a better of picture of the local history.

“We are working closely with the county archaeological service and have appointed a local specialist firm to carry out the excavations, who are recording all the findings.  We hope to donate the artefacts to the Norfolk Museums Service, for further study and display.”

The discovery of the medieval artefacts is shining a light on the history of the site, previously occupied by a medieval Augustinian friary. A well-preserved human skeleton, found in a tomb inside a church, is estimated to date from the 14th century.

The friary was dissolved in the 16th century and the site was passed to the Duke of Norfolk, who built Howard House, now a listed building. Also part of the acquisition, Orbit Homes has submitted a listed buildings and planning application to renovate Howard House and bring it back into use.

Orbit Homes, part of Orbit Group which owns and manages over 4,427 affordable homes across the East region, will start developing the 437-home site later this summer. Due for completion in 2019, it will offer a mix of tenures, including outright sale, shared ownership, affordable rent and Orbit’s first private rent homes.