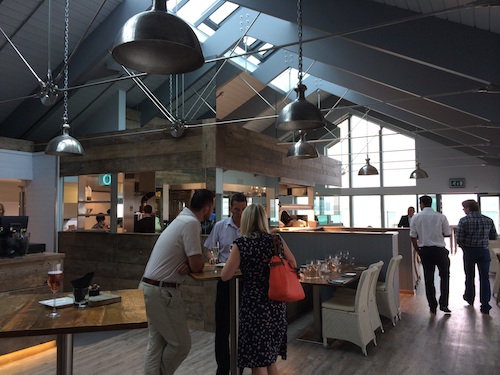 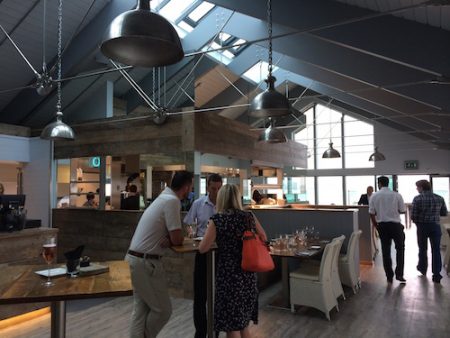 A comprehensive refurbishment project has impressively restored and upgraded the Upper Deck restaurant at The Boat House, a stylish flagship restaurant and bar on the North Quay at St Aubin, Jersey.

The refurbishment was necessary following a fire last September, which engulfed the roof of the venue after breaking out in the kitchen area, severely damaging the first floor restaurant and roof. Three fire engines and over 20 firefighters tackled the blaze, with fire crews remaining on the scene for several hours to cut away and expose parts of the roof area to ensure the building was safe and the fire was fully extinguished.

Now the contemporary style new Upper Deck restaurant is looking better than ever, following completion of the project for The Boat House Group. The scheme was designed by Elliott Design Partnership, who also acted as project managers, and carried out by main contractors Hacquoil & Cook, who, together with their subcontractors, were commended for doing ‘a brilliant job.’ 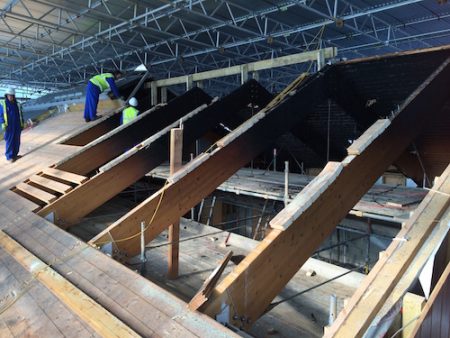 Dion Elliott, partner at Elliott Design Partnership and designer for the project said: “Since we carry out all the architectural work for the Boat House Group, we were appointed to take charge of the project to restore the roof, the Upper Deck Restaurant, kitchen and seating area.

“The design of the new interior is different from the original. The basic design theme for the refurbished areas is a reclaimed vintage industrial look.

“The main roof of the building suffered quite badly from fire damage, as did the internal glulam beam structure. This element of the project involved removing 60 per cent of the remaining roof and then replacing the entire roof covering, including the atrium glazing in the central roof ridge, as well as six glulam beams in the roof structure. The roof timbers were painted in a special fire retardant paint.

“A brand new fully equipped open plan kitchen was installed, together with all new services, including ductwork, extract ventilation and fire safety systems. The walls have been clad in reclaimed timber rough boards, which were originally scaffolding boards. 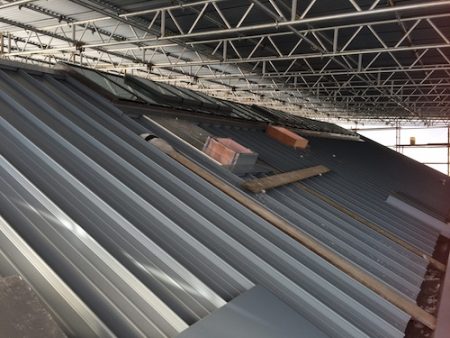 “The restaurant floor was water damaged and so had to be replaced new Karndean limed oak flooring, and all new furniture and new blinds were installed, and the area was completely re-decorated. The original bar area was undamaged and so did not require any work.

“This was an incredibly fast track project. We started on site in January 2015 and the project was completed on June 17th. The main elements were the roofing and the kitchen. Throughout the project, the ground floor restaurant remained trading, so working in this live environment was quite challenging for the main contractors who did a brilliant job, as did all the subcontractors.”

The Upper Deck restaurant serves the best of Jersey cuisine. Flame-grilled steaks are joined on the menu by juicy chicken cooked in the rotisserie. Then there are tasty fish dishes and favourites such as the famous Boat House Burger or vegetarian leek, roquefort and wild mushroom Tart. 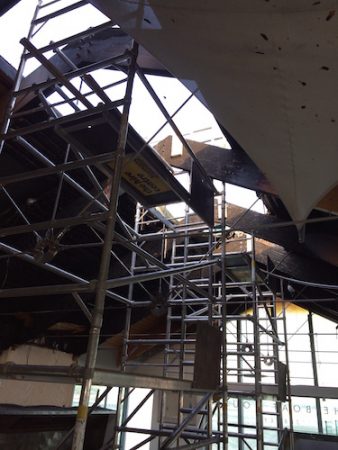 The Boat House is one of four venues across Jersey owned by the Boat House Group. Also in St Aubin, The Spice House offers exotic Thai and Indian fusion food. In St John, The Farm House serves classic fare in rustic surroundings complimented by a play area. Meanwhile in St Brelade, The Tree House, which has its own pizza ovens and rotisserie, also has a lovely family feel with indoor and outdoor children’s play areas.

Elliott Design Partnership was formed in 2005 by Catherine Elliott & Dion Elliott. The practice has extensive experience in commercial refurbishment projects and aims to combine creative thinking with enthusiasm, commitment and skill, together with a straightforward approach to produce innovative projects tailored to each individual’s requirements.

Hacquoil & Cook are a Jersey owned and managed business, who have been servicing the Island’s community since 1973.

A proactive and methodical approach to construction is reflected throughout the company, who firmly believe that early communication with their clients is the key to producing successful projects, with minimal intervention.