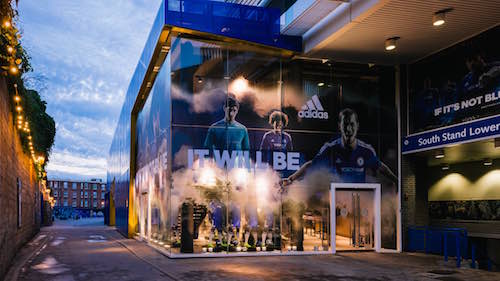 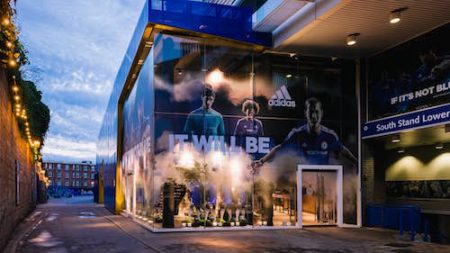 Chelsea FC has re-opened its flagship megastore at Stamford Bridge stadium this August, after an eight-week period of reconstruction between football seasons. Only four months passed between the first drafts and the completion of renovation.

The site covers 900² metres and comprises two storeys, with a new cube-shaped façade which marks the entrance to the shrine of the fan community with much more visibility and a long-range effect. The heraldic lion logo faces fans from the micro-perforated metal façade and personifies the famous fan chant “Home of the Blues.”

The Chelsea FC Megastore was one of the Schwitzke Group’s more recent projects, in charge of developing a branding and retail concept with lots of flair for the Premier League champions. The Schwitzke Group also re-built the fan’s shop within a short time, demonstrating their dedication and commitment to producing an end product that the client can be happy with. 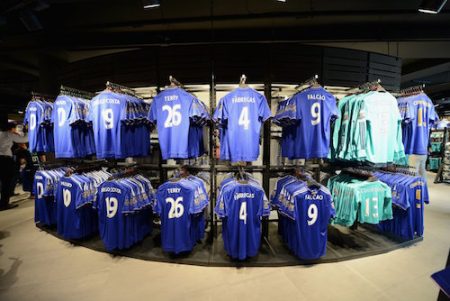 Premier Construction caught up with Managing Director of Schwitzke Project, Wolfgang Sigg, to discover some key information on the project. Wolfgang commented:

“The group has a lot experience in different football clubs in Germany; we got the chance to take part in a pitch to create a new concept for the Megastore, fortunately we convinced them that our concept was the best for their vision.”

In terms of the design concept, the group had to produce the feeling of a Megastore, ensuring that visiting fans would comprehend the large scale of the football club. Entering the heart of the stadium and the fan shop has to communicate Chelsea FC to the fullest: a combination of Chelsea FC’s history and experience, one of the biggest teams in the world for football – and the Schwitzke Group understood this. 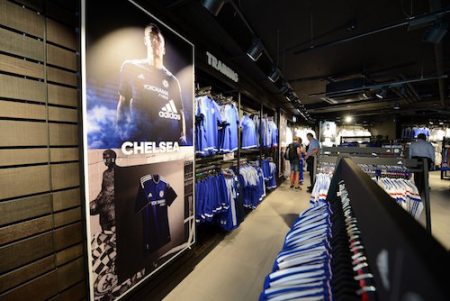 “Our target was to make it clear how big Chelsea FC actually is, showing the history of the team, and make the store seem bigger and more powerful. We worked with large-scale graphics and prints on the walls and showed the open ceiling rather than covering everything up.”

Replacing what was previously the staircase the store now features a spectacular glass tower with transparent floors. Located in the middle of the store, it runs through both floors and displays replicas of all national and international trophies. This is now a cherished feature amongst the fans, evident by the copious “selfies” that are taken on a regular basis.

The top floor displays football shirts in an elliptical arrangement surrounding the glass tower – the shape and themed lighting give the fans a sensation of being in the stadium. Presenting the shirts in this way creates a real sense of glory. 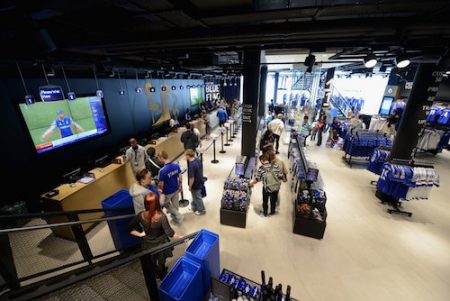 “Previously with the Chelsea Megastore you couldn’t actually view the store when entering the courtyard or the stadium, now we have designed the rear façade with perforated metal sheets with the lion of the Chelsea logo in it, so that it is really visible.

“There was previously an escalator in the centre of the room – with a large remaining area – and the main thing was to strip out this element. We stripped out the suspended ceilings and created a completely new room, making it as large as possible.”

Excitingly, a new spatial experience has been created, which opens up the view of the entire shop. This allows visitors to admire the original exhibit of the players and indulge in memories of the big stars at the Hero Wall. Bespoke wallpaper was used to adorn the walls, with silhouettes of players to add to the detailing of the space. 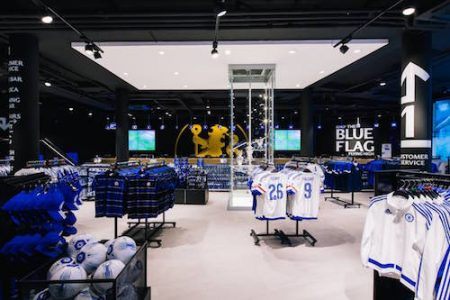 Overall, the store maintains many blackened areas, exposed electrics and a certain bare brickwork feeling. This allows the club’s blue range of products is highlighted centre stage, with the lion emblem accentuated also. Selected materials such as wood and brass define the surfaces and create a warm ambience.

“From start to finish it was a four month process, the preparation phase was one month. The real challenge was to implement what we and the client expected in eight weeks, as we only had the break between the two football seasons.

“It’s an iconic project because it’s an international football club and of course football is a huge sport. As football fans, we also appreciate a project such as this working with an elite client such as Chelsea.” 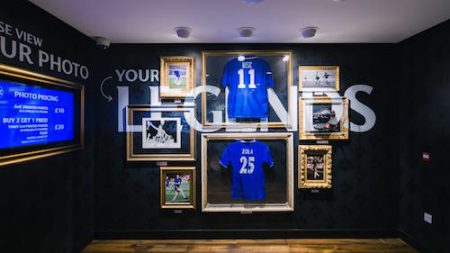 Formed in 2008, Low Carbon Technologies Construction Limited specialise in a range of construction related tasks, tackling new builds and refurbishments across various sectors. With a portfolio that comprises many diverse developments, the company takes on any project with the aim of delivering a timely, high quality service to any client.