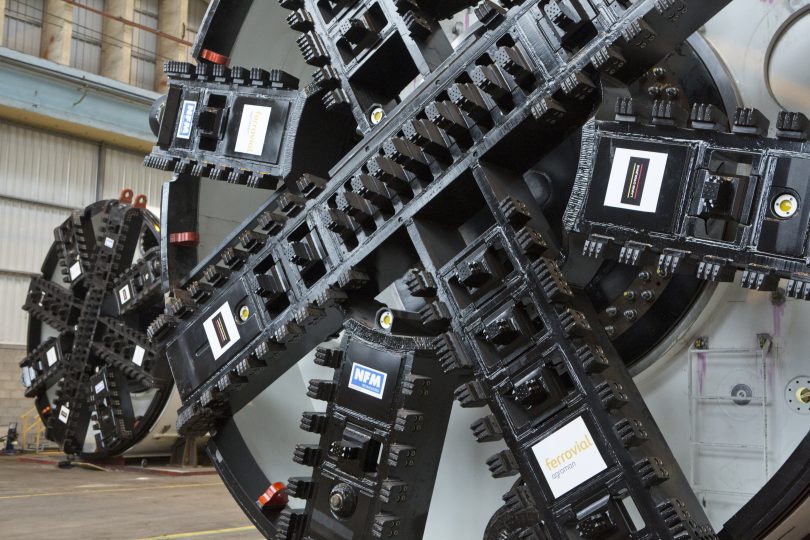 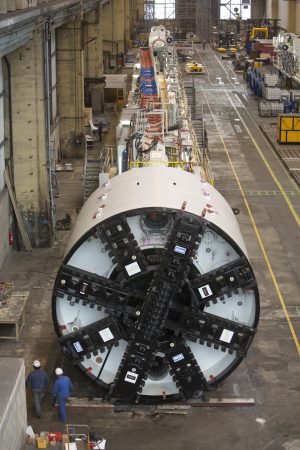 The two machines – which were built by NFM Technologies in Le Creusot in central France – will now undergo special factory testing to ensure that all components are of the highest quality and fit together perfectly. Once this has been completed successfully, they will be dismantled later this year and shipped to London. Teams in Battersea will then start their final assembly, which is estimated to take three months.

Each TBM ‘cutting head’ which will do the excavation work is just over six metres in diameter. At over 100 metres long each, the machines are equivalent to the length of the pitch at Wembley Stadium. Each machine will undertake two individual tunnel drives to construct the 5.2 metre diameter tunnels.

The TBMs, which will be named by local school children, will run 24 hours a day, seven days a week stopping only for scheduled maintenance. As they advance forward, nearly 20,000 pre-cast concrete segments will be built in rings behind them.

Tunnelling for the Northern Line Extension, which will extend the line from Kennington to Battersea via Nine Elms, is due to begin in early 2017 and will take six months to complete. Two new stations will be built: one at the heart of the Battersea Power Station redevelopment and another at Nine Elms to the east, serving new developments such as the US Embassy and the redevelopment of New Covent Garden Market, as well as existing communities.

The tunnelling will see over 300,000 tonnes of earth excavated and pass along nine conveyors before being loaded on to barges and taken to Goshems Farm in East Tilbury, Essex where it will be used to raise former landfill sites to create arable farmland. Transporting the excavated material in this way will remove over 40,000 lorry journeys from the Capital’s busy roads, reducing traffic congestion and helping to keep cyclists and pedestrians safe. It will also significantly reduce the site’s carbon footprint.

The Mayor of London, Boris Johnson MP, said: “The construction of these mammoth machines is the clearest indicator yet that we are about to deliver the first major extension of the Tube in nearly 30 years. By extending the Northern Line we are improving access to the Tube for thousands of south Londoners as well as triggering the creation of vital new homes and jobs.”

Nick Brown, Managing Director of London Underground, said: “This is the first glimpse of the powerful machines that will help build the Northern Line Extension and bring Battersea and surrounding areas to within 15 minutes of the West End and City. The TBMs will make their way to London later this year and in early 2017 will start powering their way under south London to create the first major Tube extension since the Jubilee line in the late 1990s. Their manufacture is a significant step forward in the project which, once complete, will help us to support jobs, homes and growth in this area and keep pace with London’s rapidly rising population.”

The project, which is being funded entirely through the private sector, will enable the regeneration of the Vauxhall, Nine Elms and Battersea area, spurring economic growth by supporting around 25,000 new jobs and 20,000 new homes, including around 4,000 properties that are available exclusively to local people through a range of affordable housing schemes.

During construction, the Northern Line Extension will support around 1,000 jobs, which will have a positive impact on the whole UK economy, including around 50 apprenticeships through the supply chain across the country. The wider Nine Elms regeneration programme is also on course to provide around 22,000 construction jobs, including apprenticeships, graduate opportunities and other starter roles for young Londoners.

Extending the Northern line to Battersea and Nine Elms is a core part of a range of works taking place to improve service levels on the line. Northern line passengers are already benefiting from new signalling, which is providing a 20 per cent increase in capacity through central London during peak times – enough for an additional 11,000 passengers per hour