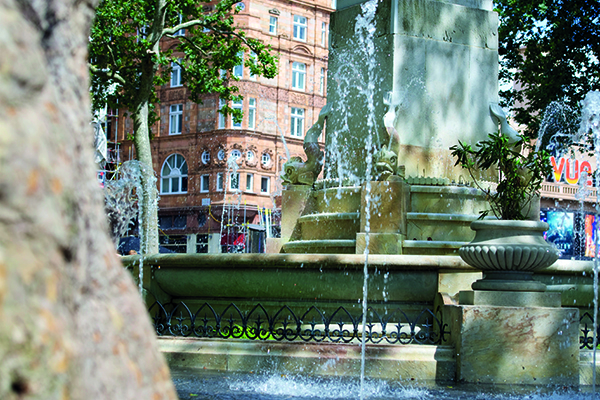 The first of several hotels to launch in prime central London from Criterion Capital, Victory House boasts 86 stylish and contemporary rooms alongside French-inspired restaurant Petit Bistro from acclaimed restauranteurs Ed Baines and Jamie Poulton. The hotel’s central location means many of London’s major landmarks are within easy reach. The design of Victory House takes inspiration from its immediate surroundings through both subtle and more pronounced cinema references. 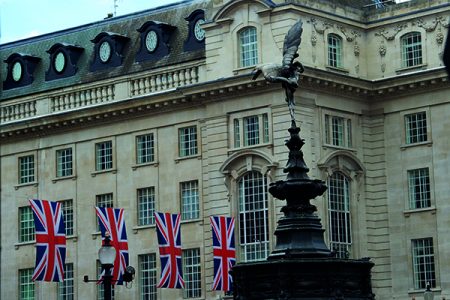 Renowned architects Michaelis Boyd led the design of the hotel having worked previously with the client. Senior Architect at the firm Luke Rowett spoke to Premier Hospitality about the work. He began by explaining the impact Leicester Square had on the design:

“In many ways we have tried to hark back to an earlier age of what Leicester Square is, and what cinema is, rather than fall in line with the other offerings in the area which are not quite as classy. The brief was very loose but I think a lot of the MGallery hotels take inspiration from their local environments. They pick on things that are going on and in that sense feel unique. That was something the client wanted again and it’s also something we do on a lot of our projects. We try to pick up on what’s going on in the area and respond to certain interesting or idiosyncratic things we find there in order to come up with an interesting design.

“In Leicester Square there are a number of things to stand out. Obviously there is the cinema aspect to it which we have referenced in both subtle and overt ways. We have projectors outside the lifts, for example, that are playing old, golden age cinema premiere footage constantly. As you step out of the lift you are confronted with pictures and videos of people going to premieres in the 1950s and 60s. They were glamorous occasions as opposed to the commercialised events you get today.

“We also got some subtle nods to the art deco design you used to find in West End theatres and cinemas. We have a large, curved ceiling as you come in through the main entrance that has an art deco feeling. We also have a lot of brass and other materials that were popular at the time. Walking through the corridors to the rooms, it’s quite a dark space with low level wall lighting that gives the feel of a cinema as the lights go down.”

On a more practical level, the aim of the public spaces was to create an experience that is currently un-matched in the area. Petit Bistro, meanwhile, uses the best local produce to create a menu that is high in taste in a modern and informal setting. Moving onto the bedrooms, Luke continued:

“Generally I think that with hotel rooms you can have a theme and a style but you don’t to go over the top because in most cases it is somewhere people have travelled to rest. The rooms themselves are slightly more understated and the colour schemes are more muted. They comforting and welcoming places but the public areas are where we’ve been a bit more bold. We’ve really tried to push a more opulent and nostalgic feel.

“The bedrooms do feature some nice touches. We’ve had a number of items bespoke made and they are a nice place to be but we’ve not gone for the same strength of colours as the public areas.”

Reflecting on the importance of the project, Luke added:

“It’s really good to have finished this project and it’s one of the most central and easily accessible projects we’ve done. It’s very interesting to feel that there’s going to be such a public experience of one of our projects and I am excited to see how that goes down.”

Victory House is the latest addition to the MGallery brand – a collection of boutique hotels dedicated to lovers of life, literature and culture. The collection is an eclectic mix of historic luxury hotels and contemporary structures that are unique to the cities they inhabit. 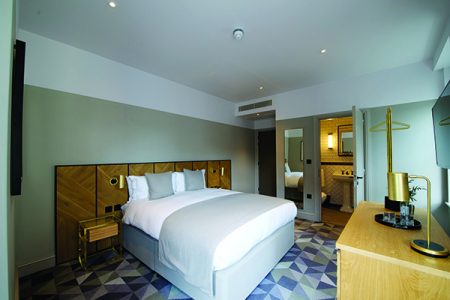 Strada London are specialist designers, manufacturers and specifiers of architectural Ironmongery for the luxury residential, hospitality and leisure markets. Strada London have particular skill in traditional production methods, including lost-wax casting and sand-casting, as well as an un-paralleled range of finishes including bronzes, nickels, chromes and precious metal finishes.

Strada London has been operating in the luxury sectors since 1981, previously working in artisan kitchen manufacturing. The company has been fortunate enough to be involved with projects all over the world including clients in St Lucia, Monaco, Paris, Dubai and of course London.

The majority of Strada London’s work is for private individuals; of their public projects, Strada London has supplied Kensington Palace, Eton College, Harrods and The University Arms Hotel in Cambridge. Strada London has had, and continues to have, the privilege of working for such well-known designers and architects as Michaelis Boyd and John Simpson and Partners.

Products were supplied in two principle finishes: RAL-finish black for the guest areas and satin brass for the communal areas.

“Victory House was the first Hospitality project we have completed for Michaelis Boyd Associates so we were very glad to have the opportunity to showcase our skills on a larger scheme which naturally had more stringent budgetary control and time-scale controls. The project was a fantastic platform for us to demonstrate our strengths as product designers and expert finishes whilst supplying and managing the project with the level of professionalism required.”

“We originally built our business on the basis that with knowledge comes competence. We still apply that same philosophy, but today’s Strada is one that leads the way with a fine balance of design prowess, manufacturing skill and specification nous.”

Case Study on the project. 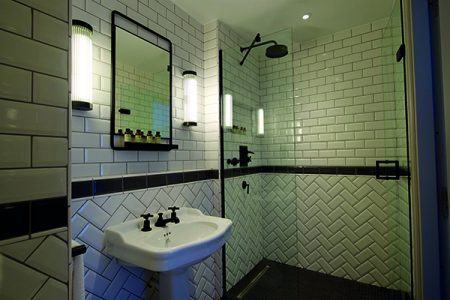