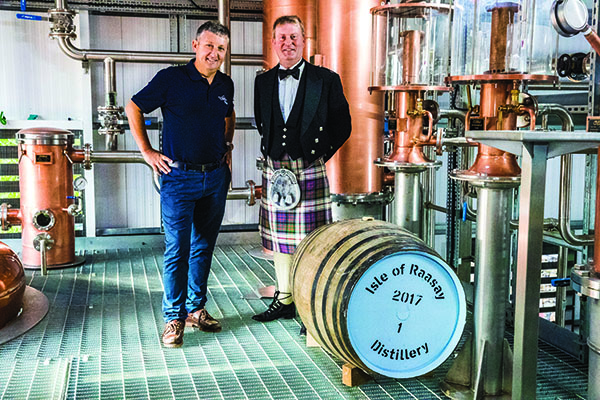 Whisky makers R&B Distillers have officially opened the Isle of Raasay Distillery – the first legal whisky distillery on this small Hebridean Island. R&B Distillers have brought this traditional Scottish craft to an unchartered whisky region, harnessing the raw elements of the unique terroir to create the first Raasay Scotch, which will be ready to drink from 2020.
Work on the project was undertaken by main contractors The Colorado Group and architects ABIR Architects and Allen Associates.

Designed by Olli Blair from ABIR Architects and Allen Associates, the distillery incorporates the Victorian Borodale house and the modernity of a brand new distillery. However, the main feature of the design brief was to showcase and compliment the stunning views from the distillery site.
Speaking to Premier Construction, Architect Olli Blair from ABIR Architects said: “The site was previously a hotel and when the client bought it, it had ceased trading as a hotel, so it was sitting empty and had in its last years not been particularly well maintained.  This was an 1850s sandstone built villa that had been extended in the 1980s with help from the local development agency. The client picked up on a number of things to feed into our brief, which was a whiskey distillery, but amongst that was the fact that we had this existing house which was covered in these layers of 1980s development so we wanted that at the heart of it. The client also wanted to acknowledge the views out because it could be the best view from a distillery anywhere in Scotland – there are plenty that have good views but this has a particularly south west facing aspect and is very big and open.”

Raasay is a small island, only fourteen miles in length, situated off the East coast of Skye. The islands 120 residents have watched eagerly as this disused Gothic villa hotel, Borodale House, has been transformed into the new distillery, adjacent visitors’ centre and Na Tùsairean Club members’ accommodation which will be opening later.

Olli added: “At the main entrance we have a retail area and reception. Off of that there is a large orientation space where the tour starts and there is a talk about the island, the location, where the water is from, geology of the island etc. From there you are taken through the building and into the production hall where the tour continues to explain the equipment and how the distilling takes place and then the end of the tour takes place in the tasting room, where our members are given tastings of products. We also have a member’s only area and that is a lounge and bar with a fireplace and a view and six en-suite double bedrooms. Members and only members can stay at the heart of the distillery, taste the products, do the tour, experience the island and are catered for with evening meals and breakfast.” 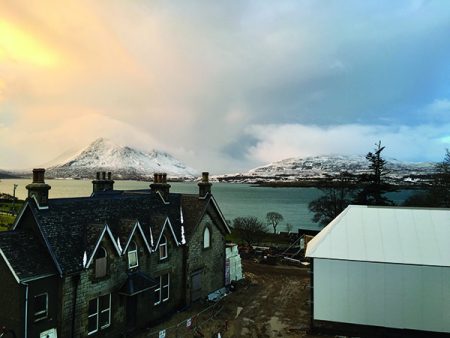 R&B predict that it will be able to produce 150,000 bottles of Scotch whisky a year. Single malt, ‘Raasay While We Wait’ is an aptly named taste of the style of whisky that will be produced on Raasay. It is lightly peated to reflect the volcanic mineral content in the water supply, and balanced by fruity notes from Tuscan red wine finishing casks. The team also has the long-term ambition of using all-local ingredients – water, peat and barley– to create a spirit that is a true reflection of this uncommon terroir.

Co-founders Alasdair Day and Bill Dobbie are realising a dream to make whisky in this uncommon location.

Alasdair Day described the uniqueness of the project and said: “It is the location; an island off an island with complex geology, water and island climate with probably the best views form any distillery in Scotland that makes Raasay ideal for our innovative Scotch whisky distillery.”

The distillery will be independently owned and operated and is expected to generate employment for up to 10% of the island residents.

Olli concluded: “In terms of what residents hope for, I think it is like everything in the highlands, it is for job security and high quality jobs that allow young people to stay in their own locations and I think in itself, The Distillery should bring a larger number of visitors to the island because they want to see the distillery.

“This has been a huge project for me personally and for my company. We hadn’t done a distillery before but I think the amount of knowledge I have garnered over the past three years is enough to say that I would love to do another one.” 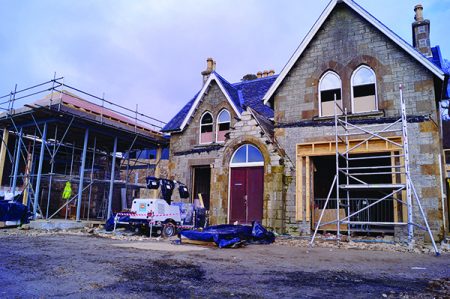 Colorado Construction and Engineering is a medium sized privately owned specialist construction, engineering and finishes business, with a specialisation in the refurbishment and renewal of listed buildings, the construction of one-off luxury homes, the design & build of distilleries and visitor centres and the fit-out of offices. Formed in 2006, Colorado Construction and Engineering has been built on many years of construction experience, building management and trades teams and now has an annual turnover of c.£22M, receiving the Business Insider Award as the fastest growing Scottish SME.

Over the years, Colorado has built up a strong portfolio with clients including Quaker, PepsiCo, Devro, Melville Housing Association, The Royal Collection Trust, Glen Turner Distillery Ltd and Spire Healthcare, amongst others. Most recently, the company has been involved with R&B Distillers, as the main contractor on the Raasay Distillery project.

Work on the project included the demolition of an accommodation wing; muck shift work including the mitigation of Japanese Knotweed mitigation and rock excavation; the renovation of Borodale House into a visitor centre and 6 bedroom members hotel; the construction of new 300m² warehouse and cask filling facility; and the complete renewal of storm water and foul drainage with the installation of a separate effluent system. In addition, Colorado undertook a full M&E, as well as the refurbishment of the existing house to form a member’s hotel and visitor centre.

“It was important for us to be involved in this project as it continued our excellent experience in this sector. In the last seven years alone, the Colorado Group has constructed or expanded the capacity of five distilleries.

“Our portfolio includes the £36M Starlaw distillery, the state of the art Inchdairnie distillery in Glenrothes, and the conversion of the listed steadings on the Cambo Estate into Kingsbarns distillery and Visitors Centre near St Andrews. We are currently constructing a further two distilleries, one on Skye and one on the island of Raasay.

“We have also been responsible for the construction of some 17 maturation warehouses, the first new cooperage in Central Scotland, bottling hall works, tank foundations and workshop structures, together with the associated schemes for Fire Engineering, Effluent Management, SEPA, SUDS, COMAH and energy usage reduction and sustainability.”

“The £36M Glen Turner Distillery project, which produces 25M litres of whiskey per year, was assessed by the Scottish Construction Centre as an example of ‘best practise’ of construction procurement. The award was based on the level of savings that were delivered by the Colorado team, while constructing the project as the design was developed.

“We have a great reputation in this sector.”