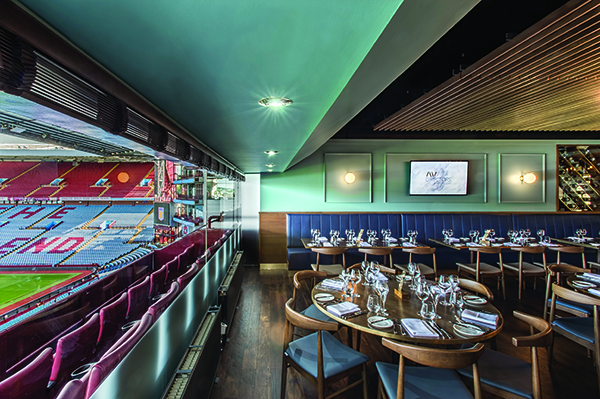 One of English football’s most historic and decorated clubs, Aston Villa is working towards a brighter future on and off the pitch. With a blend of youth and experience, the current squad is well placed for a return to the Premier League.

Off the pitch, meanwhile, Aston Villa recently embarked on a dramatic overhaul of its hospitality offer. Following the conclusion of the 2016/17 season, work began on creating The Directors’ Club – a 180-seat, fine-dining restaurant. Previously the reserve of VIPs, in The Directors’ Club fans watch can now watch the game from the best seats in the house, enjoying the same menu and sense of occasion as the directors. 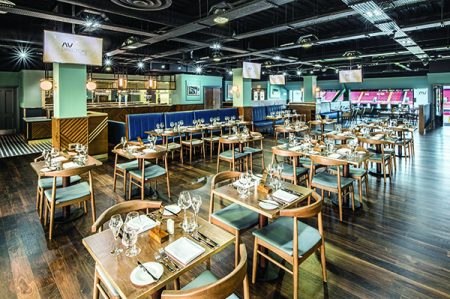 The project was led by interior designer Nick Leith-Smith and venue strategists Forward Associates, in conjunction with Levy Restaurants and contractors Benchmark Designs. To find out more about the project, Premier Hospitality spoke to Nick about the origins of the project:

“Though I hadn’t worked with Aston Villa previously, I have a good working relationship with Forward Associates and Levy Restaurants. They had been working with Aston Villa for about a year, looking at different way to optimise the offering for the fan base.

“We came in to develop the interiors for The Directors’ Club Forward Associates wanted to deliver a space which built on the rich heritage of the club and captured its historic atmosphere. The key decision was to move the directors’ box to the halfway line. This meant it was in the middle of the space and much more a part of the overall stadium atmosphere.”

Roy Westwood is the founder of Forward Associates and explains why that was important:

“Bringing the directors centre stage created an opportunity. Guests place a premium on the exclusive and the money can’t buy and the chance to spend the match day with the great and the good of football is the driving force behind The Directors’ Club.”

The directors’ box is now at the heart of the new restaurant and acts as a focal point to the room. At either end of the room are two marble-topped bars. Constructed from steel and amplified by the addition of mesh gantries made from brass, the bars have a striking impact on the overall space. The diagonal lines of the A and the V of Aston Villa have also been weaved into the design, while the materials and colours are respectful of the club but have been given greater depth through the use of different shades of blue.

“To form the directors’ box, we had to partition off a section of the room. In terms of the look and feel, the space had an existing dark wood floor which was stripped and refinished. Some sections of the floor were replaced with a dark wood herringbone design. There is new fixed and loose furniture, all with leather upholstery and we refurbished the two bars to include feature timber and brass panelling on the front. 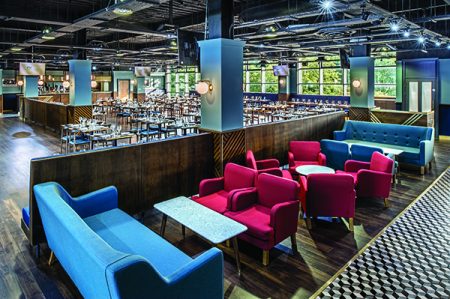 “The main challenge was achieving the high end finishes within the time provided. So far the space has been well received. I think the regular users in particular have been won over.” A point echoed by Roy.

“Great hospitality only happens when it takes into consideration the audience, the environment and the event. A great restaurant with no connection to the club would ultimately fall short. The secret to The Directors’ Club is the way it intuitively weaves the things that make Aston Villa special into the fabric of the space.”

In addition to a number of high-profile games, the space has also been used for individual events and the positive feedback from guests so far is a testament to the innovative thinking highlighted throughout the venue. With its stunning panoramic views across the pitch, The Directors’ Club looks to Aston Villa’s future while providing subtle nods to the team’s historic past.