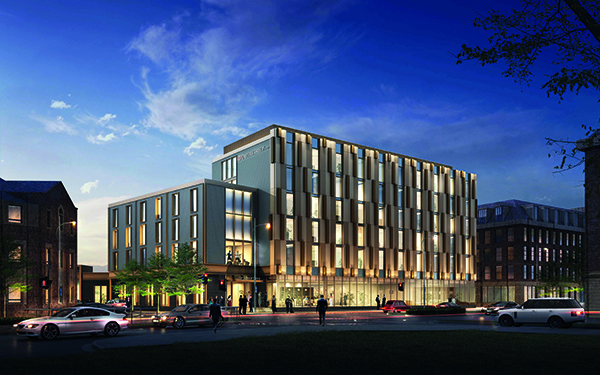 Located in Ferensway, Hull, the DoubleTree by Hilton is located at the former site of the Lexington Avenue nightclub and is perfectly situated for exploring the city centre and beyond.
The £22 million project was developed by Lincolnshire-based developer Manorcrest alongside Aros Architects. Work on site began in October 2016 with the hotel set to open just before Christmas 2017.

The hotel boasts 165 bedrooms and a 1,000sqm ballroom for events and conferences.

Speaking to Premier Construction, Aros Architects Director Simon Coles said: “The site is ground floor, plus five. It is broadly split into two sections. The hotel and bedrooms are above and at the front of the site and then a conference facility is further to the rear via a separate entrance. The conference room seats 750 for a banquet and depending on the seating configuration could be more.

“There is also a bar and signature restaurant by Marco Pierre White which faces the front of the site. It is a very lively and flexible space where one area flows through to the next. On the fourth floor a sky bar allows people to take advantage of fantastic views across the city and fits 175 people with an external terrace.  It should be one of the best places to hang out in Hull.” 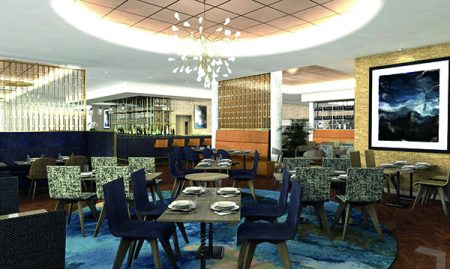 The DoubleTree by Hilton offers stylish guest rooms and comforting amenities. Get a peaceful night sleep in a guest room with sumptuous bedding, blackout curtains and air conditioning. Modern comforts include complimentary Wi-Fi, 40-inch Smart TV, desk with ergonomic chair, tea/coffee making facilities and laptop sized safe. Guests can also enjoy the benefits in a DoubleTree by Hilton suite with additional space and privacy. Suites are larger corner rooms that feature a living area with sofa, private bedroom and indulgent extras like bathrobes, slippers and deluxe bath products. Guests can relax in stylish surroundings and take in delightful views of the city. Accessible rooms are also available and feature lowered beds, switches, thermostat and storage areas, plus generous passageways and a roll-in shower.

Simon added: “The design picks up on Hulls industrial heritage and we took some ques from that regarding the appearance of the main façade.  The interior design throughout reflects Hulls maritime traditions.

“It has been built very rapidly and the whole project has taken 16 months, which for a job of this size is pretty quick.  It was ultimately achievable because most of the guest rooms were built using a modular system by suppliers CIMC. They were constructed in China as the equivalent of shipping containers which were transported over and took about three weeks to arrive. Then all of the guest rooms were ready to go and were erected within a four week period on site.”

Food is comfort at DoubleTree and DoubleTree by Hilton Hull makes it easy for guests to enjoy a delicious meal without even leaving the hotel. Whether you are into health food, snacks, or gourmet food, there is something for everyone. Branded restaurant Steakhouse Bar & Grill by Marco Pierre White will be open for breakfast, lunch and dinner with guests able to choose from steaks, English and French classics and a selection of cocktails. The Hotel Lounge and Bar is described as an area to meet for business or pleasure with refreshments such as tea and coffee and light snacks available. The Rooftop Bar is accessed by its own lift from the ground floor all the way to the fourth floor and serves some of the city’s finest champagne, wines and cocktails accompanied by stunning views of the city.

“The City of Culture has been a big thing for Hull and that obviously helped in kick starting various projects around town. It had a big influence on getting this project away too, so it is a nice tie up to see everything coming together at the end of what has been a massive year.” said Simon. 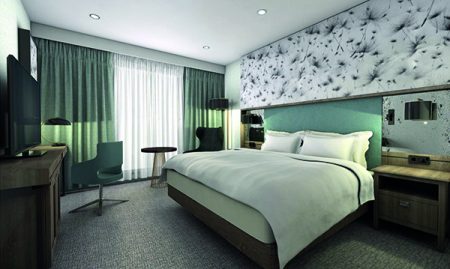 The DoubleTree by Hilton will be the first four star hotel to open in the city.

Simon concluded: “Hilton are one of our key clients and we have had a long association with them.  Hilton, the developers Manorcrest, and LEAF Hospitality who will manage the hotel are very pleased with the end result.  All members of the team have done incredibly well to get the scheme built in such a short period of time.”