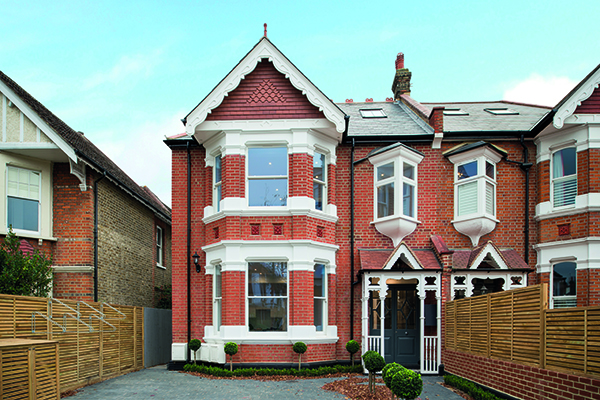 Founded in 2007, Kisiel Group is a Raynes Park based design and build construction company. Over the last decade the company has built strong reputation on delivering quality projects, from stunning extensions to sustainable new builds. Kisiel Group is both a member of the National Federation of Builders and a Chartered Building Company.

Earlier this year, Kisiel Group had major cause for celebration when it was triumphant at the National Federation of Builders (NFB) Awards 2018. The company’s Birch Grove project was successful in the ‘Refurbishment of the Year’ category at the ceremony held in March at the Belfry Hotel & Resort.

The residential project encompassed significant refurbishment works on a property that was not in a good state of repair. The sympathetic restoration included returning the front façade and porch entrance back to their original state, carefully matching the porch on the adjoining property. Period features that had previously been removed, such as tiled flooring in the hallway, were also reinstated. This was achieved by utilising the skills of specialists within the Kisiel team.

Lukasz Kisiel, Managing Director, and Annie Summun, Director of Public Affairs, went up to accept the award on behalf of all the Kisiel team. Commenting on Birch Grove, the judges said:

“Kisiel’s unwavering dedication to client engagement and quality provided a high spec finish that the people of Ealing, the client, and the developer can be proud of.”

The National Federation of Builders (NFB) represents small to medium-sized builders, contractors and house builders across England and Wales. As one of the UK’s longest standing trade bodies, it was created to represent the building profession and to promote conditions its members need to thrive and contribute to the economic success of the UK.

As well as producing award-winning projects, Kisiel Group is also very active within its local community and has undertaken a number of schemes to help give back. At the end of 2017, a team of Kisiel volunteers spent the day making much-needed repairs to Raynes Park Vale Football Club (RPVFC).

Clearing brambles and overgrown vegetation around the football pitch, making repairs, re-positioning the existing boundary fence behind the floodlights and removing several skip loads of rubbish from the grounds were just some of the jobs that were undertaken. The hard-working volunteers also installed over 100 metres of new fencing donated by Kisiel Group. Lukasz said:

“It is extremely important to save this local football club as it helps the community to keep active and to enjoy sport locally.  I am very proud of my team for volunteering to use their construction skills for the club.  They are my ‘heroes in action’ helping the local community to make our environment even more enjoyable for both RPVFC and other members of the public who use the surrounding area for recreational activities.”

The work proved to be an immediate success as a League inspection in January 2018 saw the ground’s rating go up a grade.

To find out more about the work of Kisiel Group, both in the community or on-site, please visit www.kisiel.co.uk.