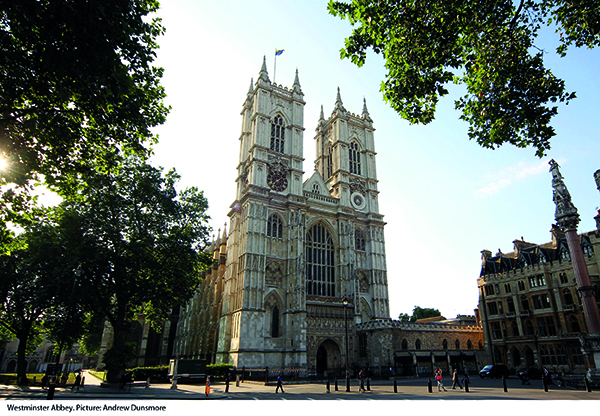 A new stair and lift tower offering general access to Westminster Abbey’s Eastern Triforium for the first time, along with new level flooring and a handrail to the Triforium openings that overlook the main abbey below, has been provided in a complex and challenging project.

The project has enabled the Triforium to be regained, and put to use housing the abbey’s new Queen’s Diamond Jubilee Galleries Exhibition.

The exhibition has been designed by MUMA, and contains over 300 objects from the abbey’s collection. The construction of the project was managed by Daedalus Conservation, who completed the work on time and within the budget allocated.

Paul Dennis and Son manufactured the balustrade on the Queens Diamond Jubilee Gallery.

The high level Triforium space that wraps around the outer edge of Westminster Abbey’s magnificent interior accounts for around one third of its total floor area. It provides breath-taking views across the abbey, enabling its architecture to be seen without the obstruction of monuments and furnishings and thereby readily understood.

And yet this valuable area had hitherto only been accessible by steep, narrow and winding spiral staircases dating from the 1250s.

As it was so difficult to reach, the Triforium space was largely abandoned, providing only overspill seating for coronations, vantage points for television filming since the 1950s and a long-term accumulation of stored items and dust.

The presence of gothic stone vaulting beneath the Triforium floors precluded the creation of an internal staircase and lift, which would have destroyed the fine spaces below.

If improved accessibility was to be achieved, a new outside structure would be necessary. The site of the new lift and stair tower was chosen as it was immediately adjacent to the one bare section of walling where a new doorway could be cut into the abbey Triforium from the outside. 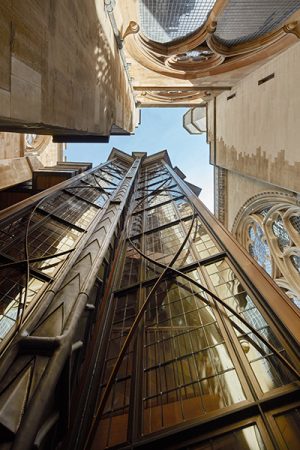 This site, the so-called Poets’ Yard, is a tight space that is also partly screened by one of the giant flying buttress piers of the Abbey Chapter House, reconstructed in this location by Sir George Gilbert Scott in the 1870’s.

The new access tower was constructed on its own concrete raft foundation, designed by the structural engineers Price and Myers, which derived support from the existing historic raft and which was therefore left undamaged by the new construction.

The new foundation for the tower was shaped to leave a section of the original foundations open to permanent public view at the base of the new lift and stair tower.

In plan the new tower appears as a ‘rotated square’. This is in effect two squares placed on top of each other, one turned by forty-five degrees to create a star shape.

The new tower is designed with a concrete lift core at its centre, which is clad in stone. The size of the lift core was determined by the need for the new lift to be able to accommodate a disabled visitor in a wheelchair accompanied by a carer.

The lift core is ‘crowned’ by a steel structure from which hang the glazed sides of the new tower, and which light an oak staircase that wraps around the lift shaft.

The outer structure is inspired by the medieval lantern which caps the crossing tower of Ely Cathedral in Cambridgeshire, the pattern of which some suggest may once have existed at Westminster Abbey. The Ely lantern is a timber framed structure that is clad in lead and whose piers also conceal rainwater pipes.

The new tower at Westminster follows this same tradition, albeit using steel instead of timber structure.

In terms of scale, although modest by comparison with the rest of the abbey, the new tower is quite substantial in its height, being approximately seven stories tall (around 88ft / 27m).

Its steeply pitched roof is necessary to accommodate the top of the lift shaft and features patterned leadwork rolls commonly found in medieval cathedrals such as at Canterbury.

The detailed design of the tower takes many of its references from the main abbey building. The floor is laid with Purbeck free stone, matching that of the main abbey floor.

The roof structure of the ground floor lobby, which connects the tower with the abbey’s South Transept is inspired by the oak construction introduced over the main Triforium spaces by Sir Christopher Wren as a part of his major restoration and re-roofing of the abbey during the early C18th.

Similarly inspired by Wren are the leaded glazing patterns of the new tower, whose rectangular shaped cames of handmade clear glass give many of the abbey windows a softer character of light. Sheet glass would not have provided this effect

Speaking of the new galleries, The Very Reverend Dr John Hall, Dean of Westminster, said: “The views are breathtaking; the space astonishing; the displays fascinating.

“The visitor will gain far greater insight into the life and history of the Abbey than ever before. The fulfilment of this vision is a shared achievement with so many people involved. We are profoundly grateful.” 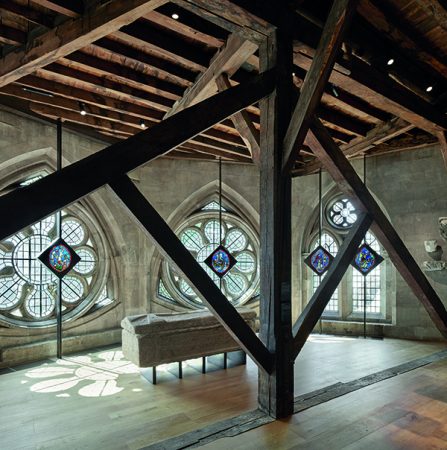