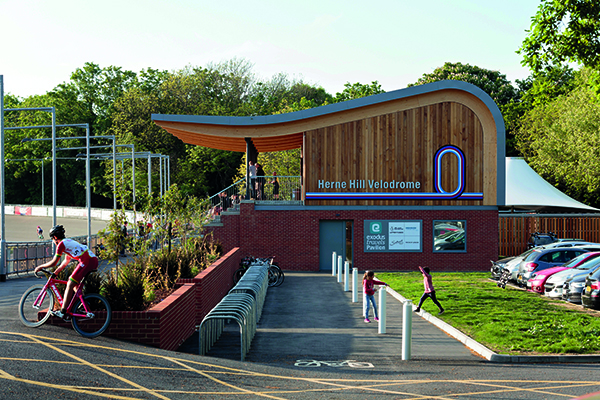 Herne Hill Velodrome is a famous cycling venue in South East London dating from 1891, host to the 1948 Olympics and where World Champions such as Bradley Wiggins and Laura Trott started their careers. In 2010, in danger of being closed down, local and cycling volunteers started a campaign to secure its long term future. Having successfully raised funds, the venue is now fully re-developed and participation is at record levels.

At onset the funding was not assured and the project had to proceed in phases as and when funds were secured:

The new pavilion, which is similar in scale to its predecessor, has a load bearing timber structure but retains a sense of historical continuity by utilising six of the original 1890’s decorated cast iron columns to support the grandstand roof. The new accommodation comprises changing rooms, first aid room, toilets, coaches’ office and a generously sized club room overlooking the entire site at first floor.

The upper level is accessed from the top of the grandstand and provides panoramic views around the track and has a kitchen, servery and meeting room which can be hired out for community use. Externally there is covered terraced with seating for around 100 spectators overlooking the tracks. Behind the pavilion, a tensile fabric canopy between the bike storage units creates a versatile year-round covered space for outdoor activities.

In design terms, the project had some significant challenges:

In tandem with the physical renovation, the long-term future is now secured thanks to a 99-year lease with The Dulwich Estate and British Cycling.

Aware that the 2012 indoor velodrome in Stratford could threaten the survival of Herne Hill, preservation of the historic venue and the Hopkins team led extensive consultations with the local and cycling communities to help determine the brief and then work through the detail of the design options prior to submitting the project for Planning Approval. Not having a single client body meant that the scheme had to respond to the demands of the many end users and still satisfy the local amenity groups, funding bodies and the Freeholder.

Eventually the remodelled venue was opened in 2017 on the 125th anniversary of its inauguration and has since been nominated for a 2018 Structural Timber Award in the category of ‘Retail & Leisure Project of the Year.’

As a result of the changes, usages of the velodrome has gone from 15,000 riders per annum before development to now over 55,000. 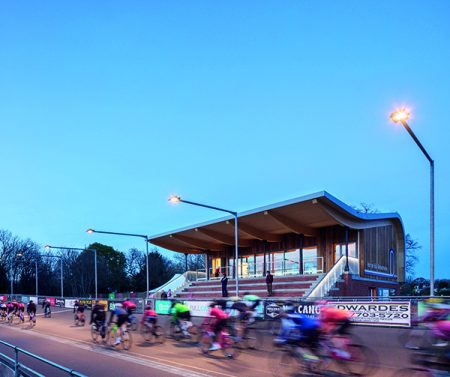