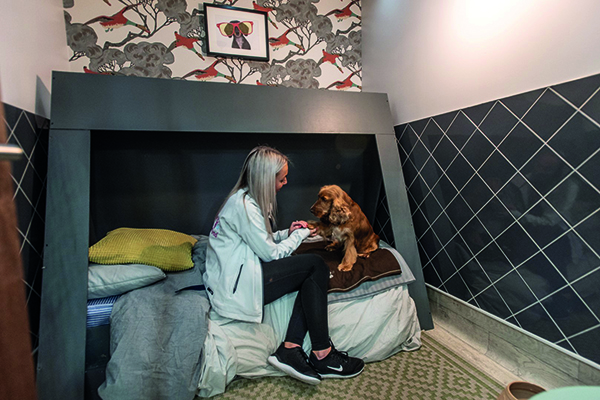 A little over a month since opening its doors, a luxury boutique hotel for dogs is garnering national attention.

Located in the centre of the Wirral Peninsula, Love Ur Dog is the brainchild of entrepreneur Scott Williams and flips the kennel experience on its head. The hotel provides five star accommodation for as many as 90 canine guests, providing unparalleled luxury and comfort.

Owners have a choice between Executive Suites, Garden View Suites and Penthouse Suites. Each carefully designed suite is equipped with full size bed, Egyptian cotton sheets, mood lighting, under floor heating, Bose surround sound and a HD TV. Love Ur Dog also boasts a grooming spa and a 500m2 park. Previously a disused industrial building, the unit has been transformed at a cost of £1m with the help of designers Novo Design and contractor Myriad Contracts. 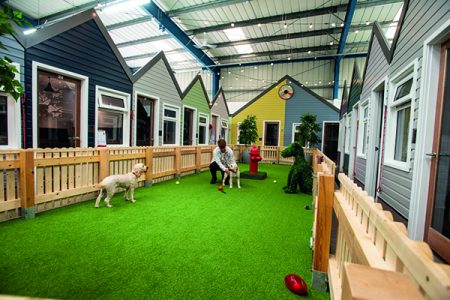 A dog lover all his life, Scott Williams first conceived the idea for Love Ur Dog over a decade ago. Having routinely struggled to find the right sort of accommodation for his three dogs, he wanted to create somewhere that was unrivalled in its quality. The opportunity to do so presented itself at the beginning of 2018 when a building became available opposite his roof company headquarters, Roofcare. Speaking to Premier Hospitality, Scott picked up the story:

“What happened was a building became available opposite our offices at the moment. I thought it was just a good building to buy, so I purchased it and sat on it for a little time. I wasn’t too sure what to do with it but then came up with the idea for a dog hotel.

“I have another job where I work out of the country a lot and I have three dogs. I always struggle to find somewhere for them to go. I won’t put them in kennels because they aren’t kennel dogs, they like to sit on the couch and watch TV with me. They aren’t used to a concrete box so I came up with the idea of an actual hotel for dogs.

“My main job is I own a roofing company called Roofcare. We do a lot of pubs, breweries, Premier Inns etc and as a result I have a long term relationship with Myriad Contracts and Scott Cuthbert. I got in touch with Scott and asked if he would give me some help because they do this sort of thing every day. He put me in touch with Abbie Smith from Novo Design. She came down and we walked round the site before she helped interpret some of my initial ideas and aspirations for the space.”

Having purchased the building at the start of the year, planning permission for the building’s change of use was granted in March. The rapid transformation of the building then became in time for a grand opening at the end of August.

“The strapline for the concept was ‘the pampered pooch with personality’ so as much as we have executed a scheme with a high quality, considered finish; it doesn’t take its self too seriously either. There’s quirky artwork and murals, and we stayed away from being ‘beige’ and clinical. The reception was a really key area. Marble tiling and plush furniture sits in front of full height glazing so customers can really get a sense of what’s on offer. We centred a lot of the dog side of things around the ‘Central Park’ area, we created an internal exercise enclosure with a canopy of festoon lighting above and house style frontage to the rooms which face onto the park.

“Timescales were a big challenge. Scott was keen to have the hotel open by the end of the summer so we had to ensure all items specified were in stock and readily available. Everything else was quite straightforward once we had clarity on concept and design direction, Scott was great, and trusted us completely to execute the proposals and deliver the project. Obviously we had to make sure finishes we dog friendly. We put timber effect altro flooring and wall tiling in each room so it’s hygienic and easy to clean once the dogs have gone.

“It’s probably one of the most unique projects we’ve worked on. It’s easy to keep doing bars, restaurants and hotels when you’ve been doing that your entire career. To work on something so different was really enjoyable. It pushes you to think differently and be open to new things.”

Penthouse Suites are the premium offering at Love Ur Dog. Located on a second floor mezzanine level overlooking the garden suites and the central park area, Penthouse Sites are individually designed including day hammocks, designer wallpaper and lighting, and a private garden. Garden View Suites are positioned around a central garden area with space to roam and enjoy natural views. The Executive Suites are situated around a modern boardwalk with large panoramic windows perfect to watch the world go by.

Owners can book a one night stay or longer while a day-care service is also available. In addition, the grooming spa provides a range of treatments and pampering. 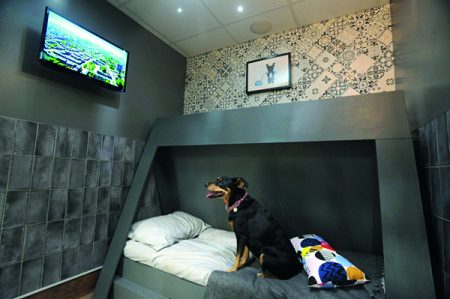 Despite a relatively short time in operation, Love Ur Dog has already generated a significant amount of attention. Expanding on this and reflecting on the importance of this new venture, Scott concluded:

“The feedback so far has been amazing. It’s ridiculous how busy it’s been. We’re taking bookings now for 2020. Christmas and New Year is fully booked up. Even through the week we’ve had 25 to 30 guests in while at weekends we’re full to capacity. We get guests coming for a look around. The Liverpool Echo have run a piece on us, Channel 5 news are here next week and we’re in talks about a documentary on Sky.

“The place does look fantastic. You walk in and you don’t expect a dog kennel to look anything like that because it isn’t a kennel, it’s a hotel. I tried to stay away from it as much as possible. I know from working in the trade for so long, having a client on your heels everyday can be a nightmare. I didn’t want to do that. I helped as much as they wanted me to help. Abbie from Novo is fantastic; I just couldn’t recommend her enough. Her vision is incredible and couldn’t thank her enough for what’s she’s done.

“I’ve been a dog lover all my life and had dogs all my life. It’s great now because I’ll start at Roofcare about 5:30am and finish about 8pm. I literally walk over the road to a hotel with 50 dogs that I can sit and play with. It’s such a great atmosphere and so nice. It’s a lovely place to be.”

Novo Design is an interior design practice working on projects within the hospitality and residential sectors. The practice has been in operation for nine months and has already built up an enviable portfolio which includes The Maven Cocktail Bar, Monkey 47 Gin bar (Pernod Ricard), Twickenham Stadium (RFU), an office fit out for Mortimer Spinks and various private residential projects.

Most recently, Novo Design was involved with the work on Love Ur Dog, providing a full interior design service to take the project from concept to completion. The work included full room specification (covering 50 individual bespoke rooms), as well as the design of all external areas, the reception and the development of the joinery details.

“This project provided us with a great opportunity to be involved on something really new and exciting working alongside an incredibly passionate client. This was a project like no other, but we like a challenge and we love to embrace things a little off-the-wall that require some ‘out of the box’ thinking.”

“At Novo Design we pride ourselves on creating authentic, well-crafted honest spaces. We listen, we observe and we create, ensuring no detail is over looked and each scheme is tailor-made to ensure not only aesthetic aspirations are reached but functionality and user-ability is maximised and achieved.” 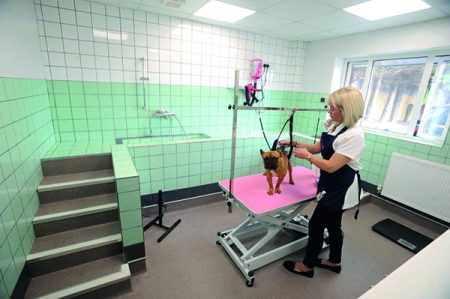 The company works with the majority of pub companies within the UK, completing approximately 250 projects per year. Myriad has worked from as far south as the Isle of Wight to as far north as Inverness – and everywhere in between.

For the Love Ur Dog hotel project, the company acted as the principal contractor and managed the works from concept through to completion.

“We have had a very close working relationship with Mr Williams for over 10 years and when the idea for this project was put forward, we jumped at the chance to be involved. It is a great idea and to be a part of it has been a privilege.”

“As a company we pride ourselves on delivering to our clients a quality product, delivered on time, every time.”