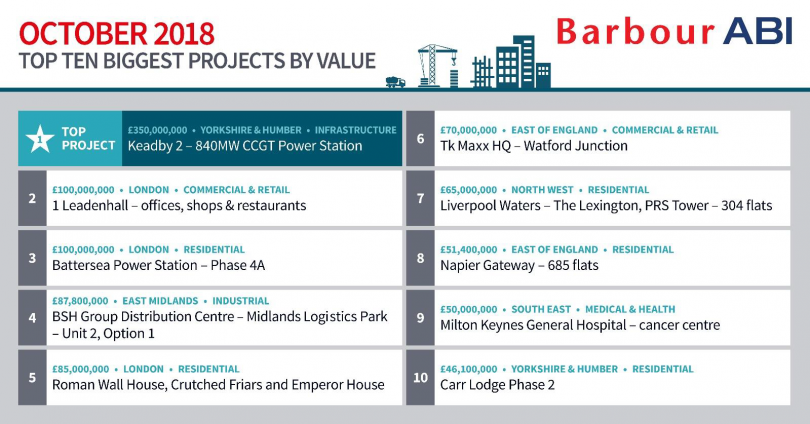 The value of new construction contracts in October reached £5.4 billion, a 3.8 per cent decrease compared to September, as housebuilding continues to prop up the industry with £2 billion worth of contract value.

The latest edition of the Economic & Construction Market Review from industry analysts Barbour ABI highlights levels of construction contract values awarded across Great Britain. The largest project in October was the £350 million Keadby 2 Power Station (see figure 1.1), over three times the value of the second largest project on the month. With three of the top five largest projects in October based in London, this greatly helped the capital account for the largest share of contracts awarded within the month, with a total of 17.2 per cent, followed by the North West and Yorkshire & Humberside with 16.6 and 16.1 per cent respectively.

Across the construction sector in October, medical and health projects reached £250 million, its best month statistically for more than two years and a 230 per cent increase on September. 91 per cent of these projects were for public hospitals, such as the £90 million contract awarded to Laing O’Rourke to finish the Royal Liverpool Hospital redevelopment after the collapse of Carillion. Infrastructure, traditionally one of the two largest sectors alongside residential, saw an increase in contract value by 6.9 per cent taking its monthly total to £1.3 billion. However commercial & retail, hotel, leisure & sport, industrial and education construction sectors all saw decreases across the month.

Commenting on the figures, Michael Dall, Lead Economist at Barbour ABI, said: “There is no doubt that the strength of housebuilding is substantially helping improve the overall figures for the construction industry. With a shortage of homes across Great Britain and an influx of buyers helped by schemes such as help-to-buy has propelled the sector and kept developers busy to keep up increasing expectations to build more homes. Nevertheless, as Brexit continues to be discussed and negotiated, the lack of clarity on the matter for the remaining sectors seems to have influenced the total amount and value of contracts.”