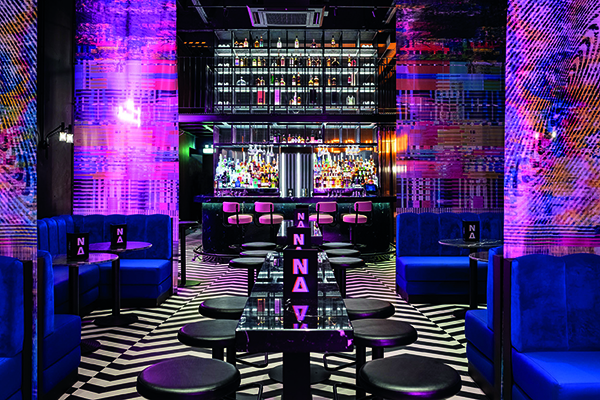 Nocturnal Animals, on Bennetts Hill in Birmingham’s city centre, is the second venue conceived by Alex Claridge. 2G Design & Build were contracted to carry out all of the building works on the ‘80s pop-culture-inspired project which takes in a 42-cover fine-dining restaurant and a 60-cover cocktail bar. The 2G team, which takes in project managers, electricians, plumbers and joiners, sourced all fixtures and fittings to bring the bold and adventurous concept to life.

2G were tasked with sourcing specialist third party suppliers including steel work designers who 2G collaborated with to create a show-stopping steel gantry staircase which is wrapped around the cocktail bar. The team were also responsible for sourcing lighting and materials throughout the scheme, including neon signage, floor to ceiling voile curtains, an impactful blue stone for the cocktail bar and expansive book matched marble table tops.

Alex Claridge, Chef-patron said: “We handed a very brave, bold and detailed brief to the 2G team and they delivered against it on time and on budget. With a project like this attention to detail is paramount; the result is something that’s unparalleled in the city.”

For the Tap and Tandoor in Solihull, 2G Design and Build were tasked with designing and delivering a traditional British gastropub with a subtle nod to Indian culture.

The space itself, previously the Saddlers Arms, was a typically British pub abundant with heritage and original features, which provided a hotbed of inspiration for the scheme. Central to the design process was the integrity of the pub’s original architecture, this was achieved by restoring dado rails, adding dark wood flooring and exposing as much brick as possible.

Bespoke light fixtures, copper accents, ornate tiling and botanical elements were layered and juxtaposed whilst additional splashes of colour, within the furniture and artwork, reinforced the Indian theme throughout.

Ajay Kenth, Director at The Tap & Tandoor said: “From the bespoke lighting to the sensitive refurbishment of the original building, the Tap and Tandoor has a thoroughly charming and unique ambiance that we’re thrilled with.”