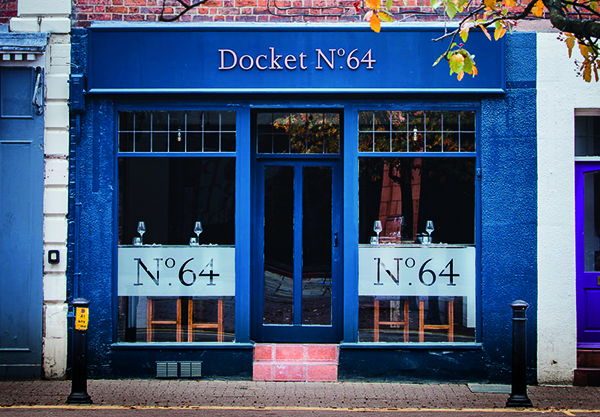 Acclaimed restauranteurs Stuart and Frances Collins have opened their second independent foodie destination in Chester. Docket No.64 serves a smorgasbord of locally-sourced and homemade produce.

Docket Restaurants has opened the doors at its new concept and second independent restaurant, Docket No.64. Launching into Chester’s dynamic restaurant and bar scene at 64 Northgate Street in October 2018, Docket No.64 is open seven days a week from 11am through to 11pm.

The wine bar is located strategically near the popular Storyhouse Theatre and offers an array of delicious cheeses, charcuterie, wine and cocktails, as well as home-made dishes for lunch and dinner, teas, coffees and cake. Take away and outside catering are also available.

As strong advocates for sourcing and promoting British produce fresh to their guest’s plate, the meats and cheeses have been sourced from Cheshire, Shropshire and Wales, showcasing wonderful local products.

Charcuterie is provided by ‘Shropshire Salumi,’ a small company based to the north of Shrewsbury producing cured meats the traditional way, using quality ingredients, artisan methods and their nose to tail ethos. Cheshire-based ‘The Lost Barn Coffee’ also provides the beans from their new company and are passionate about ethically sourcing top-quality beans from far away continents and meticulously roasting them in small batches.

For the breads, biscuits and cakes at Docket No.64, in-house chefs knead the dough, ensuring that it rises to all occasions, similarly to their sister restaurant based in Whitchurch, Docket No.33.

The owners of Docket restaurants, a husband-and-wife duo, have received an overwhelmingly positive reaction since opening their first restaurant with 5 star reviews for their Tasting Menu concept launched in summer 2017. The opening of Docket No.64 comes hot off the heels of its sister restaurant’s success, based in Whitchurch, Shropshire, which is open Thursday to Saturday from 6pm.

Co-owner and Head Chef Stuart Collins brings a wealth of culinary experience from the UK, US and Middle East, working with Michelin star chefs including Gordon Ramsay, Michael Caines and Guy Savoy.

Frances Collins is co-owner and restaurant manager, with an amazing passion for food and has a personality that is bubbly at all hours of the day. With experience in Restaurant Management and Sales and Marketing, Frances has been involved in many restaurants and bars across the North West of England and the Middle East and has worked with great names such as Chef Michael Caines, Chef Guy Savoy and at the Four Seasons Hotel, Doha.