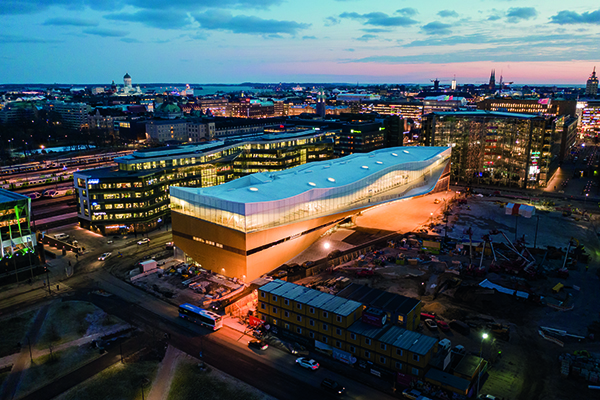 Helsinki’s new central library, Oodi, opened in early December 2018 .Described as the nation’s birthday gift to its citizens, the 17,250 sq m library has been designed by Finnish architecture firm ALA Architects, led by Juho Grönholm, Antti Nousjoki and Samuli Woolston, who won the design competition out of 544 anonymous entries.

Oodi Central Library embodies a new era of libraries in Finland and responds to the country’s 2017 update of its public libraries act, which established a mandate for libraries to promote lifelong learning, active citizenship, democracy and freedom of expression. Oodi is located opposite the Finnish Parliament, a site chosen to symbolise the relationship between the government and the populace: with their two houses facing one another across a civic square surrounded by institutions of the arts and culture including the Kiasma Museum of Contemporary Art, the offices of the Helsingin Sanomat Newspaper and the Musiikkitalo Concert Hall (which in English is, the Helsinki Music Centre). So it places the new library in the heart of Helsinki’s cultural district, close to many of the capital’s great institutions.

The design and programme of Oodi embraces technology to create new opportunities for access to books and culture. Only one third of the space within the library is used to hold books – a relatively modest 100,000 volumes at any time, but because of online services and a team of book-sorting robots, users of the library will have access to nearly 3.4 million items at the click of a mouse, making Oodi the main service point within a much larger, library system. Oodi is supported by the already well-established HelMet online library catalogue and ordering system, which gives access the Helsinki Metropolitan Area’s full collection. The design of Oodi has been heavily influenced by consultation with users and experimentation in branch libraries around Helsinki. By asking users how they used the library, and what they hoped libraries would help them achieve in the future, Oodi’s planners were able to reprioritise space in the library, giving more space for events and participation.

The shift in priorities away from the storage of a large static collection of books meant that Oodi’s librarians and designers were able to reconsider the role of the library. By entering into an extensive programme of workshops and consultation with library users, they chose instead to explore new and more inclusive ways of creating access to knowledge.

The design itself divides the functions of the library into three distinct levels: an active ground floor that extends the town square into an interior space; “book heaven” on the upper level; and an enclosed in-between volume containing rooms to accommodate additional services and facilities within the library.

This spatial concept has been realised by building the library as an inhabited bridge, with two massive steel arches that span over 100 meters to create a fully enclosed, column-free public entrance space, clusters of rooms grouped around the structure, and the open-plan reading room carried above.

The middle floor, known as the “Attic”, consists of flexible rooms arranged around the intimate nooks and corners that inhabit the spaces between the trusses of the bridge structure. The multi-function rooms are designed to accommodate both noisy and quiet activities and it is on this floor that Oodi will offer facilities such as its makerspace and recording studios. “Book Heaven” on the top floor, is a vast open landscape topped with an undulating cloud-like white ceiling punctured by circular rooflights. Here, the best characteristics of the modernist library meet the possibilities provided by 21st Century technologies. The serene atmosphere invites visitors to read, learn, think and to enjoy themselves. From this level visitors can enjoy an unobstructed 360-degree panorama view of the city centre, or step out onto the terrace overlooking Kansalaistori square. 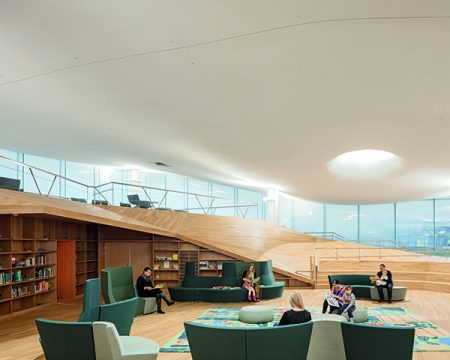 ALA Architects is a Helsinki based architectural office founded in 2005. The office specializes in demanding public and cultural buildings, station design, and unique renovation projects. ALA is run by three partners: Juho Grönholm, Antti Nousjoki and Samuli Woolston, and in addition to them employs a team of 50 architects, interior designers, students and staff members. ALA is best known for their Kilden Performing Arts Centre in Kristiansand, Norway, completed in 2011. Their ongoing projects include the expansion of Helsinki Airport, three metro stations in Espoo, Finland and a hotel in Tampere, Finland.