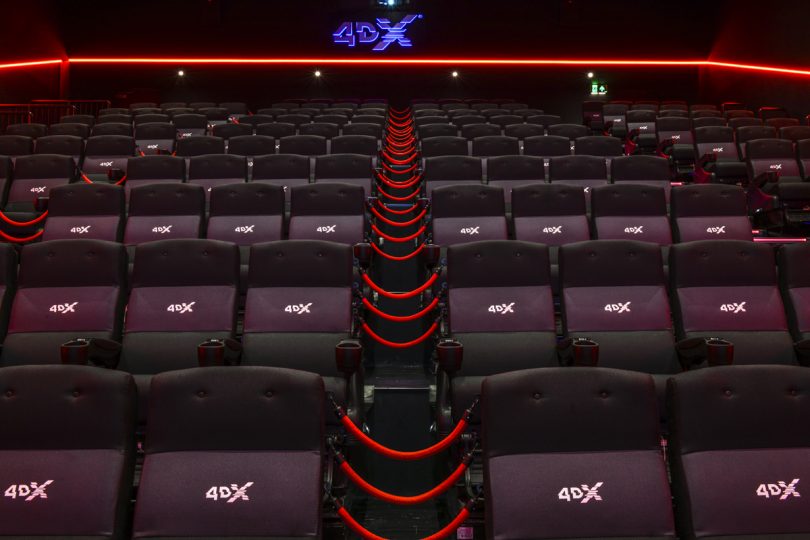 Cineworld at The O2 Greenwich has more than 4,500 seats and 19 screens including three luxurious VIP screening rooms and a 4DX auditorium.

The cinema has expanded from 11 to 19 cinema screens and now boasts a capacity of more than 4,500 seats. The additional eight screens offer VIP and 4DX experiences, complementing the existing Superscreen and ScreenX immersive technologies, making it one of the UK’s most technologically advanced cinemas.

4DX, only available at Cineworld in the UK, is an innovative cinematic technology which uses high-tech motion seats and special effects to stimulate all five senses. Wind, snow, fog, lightning, bubbles, water and scents work in perfect synchronicity with the film to bring the action on screen to life. The 4DX auditorium houses 156 specially designed seats and will open in time for Avengers: Endgame. Over 2.5 million people have experienced 4DX since Cineworld launched the technology to UK audiences in 2015.

VIP is a premium offering at Cineworld, where audiences can experience the next level in cinema comfort including a private lounge, complimentary dining, Unlimited cinema snacks and luxury reclining seats. This is the first Cineworld VIP to open in London, following the successful launches in Glasgow and Sheffield.

Cineworld at The O2 already offers Superscreen, a multidimensional sound combined with state-of-the-art projection and Dolby Atmos, as well as ScreenX. ScreenX is the world’s first multi-projection cinema technology expanding the traditional cinema screen to the side auditorium walls, creating a 270-degree viewing experience for the audience. Cineworld at The O2 was the first UK cinema to install this technology in August 2018.

David Spence, General Manager of Cineworld at The O2 said: “We are delighted to offer Londoners a vast world of viewing possibilities with the latest in cinema technology. From extreme cinema with snow, fog and water alongside chairs that vibrate and move, to supreme comfort with reclining seats and complimentary dining. We are excited to represent the future of entertainment and cinema in UK.”

Steve Sayer, VP & General Manager at The O2 added: “We are proud to now have the largest cinema in London under our world-famous roof. The O2 continues to prove itself as the ultimate entertainment destination, with Cineworld’s development complementing the existing wide offering of bars, restaurants and leisure activities at The O2, and appealing to ICON Outlet’s new retail audience.”

Cinema fans can take advantage of a range of offers at Cineworld at The O2 including weekly discounted Movies for Juniors screenings for just £2.50 on selected weekend mornings and school holidays, as well as Student NUS discount.

Cineworld Unlimited Card holders at The O2 can also enjoy access to an unlimited number of films per month for less than the price of two new-release peak time tickets, at just £17.90 per month. Unlimited cardholders can also enjoy 10% off cinema snacks and drinks, and 25% off food and drinks at six national restaurant partners, including Las Iguanas and Café Rouge, which are both located onsite at The O2.

Tickets are available from https://www.cineworld.co.uk/cinemas/london-the-o2-greenwich/.