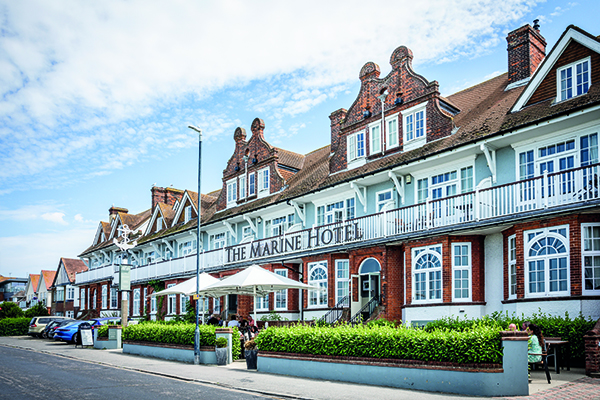 A major £500,000 refurbishment project has dramatically transformed public areas at the Marine Hotel in Tankerton near Whitstable.

The Shepherd Neame owned hotel, which boasts impressive sea views, has undergone a substantial upgrade of its bar and lounge area, restaurant, reception and Orangery.

The Orangery was expanded towards the car park at the rear of the building, doubling the size of the space available. The reception area was also expanded, taking over some of the space previously used by the restaurant. New lighting, décor and furniture was introduced throughout, with the aim of creating a more stylish, relaxed environment.

The project took around three months, and the 30-bedroom hotel remained open while the work was carried out.

Nigel Bunting, Director of Retail and Tenanted Operations, said: “It has been almost five years since we undertook a major transformation of the Marine Hotel, and we felt that it was time for it to be refreshed. The site continues to be one of our most popular venues, so the expansion of the Orangery provides much needed additional space.”

Offering spectacular sea views and blissful relaxation, The Marine Hotel is a truly special setting for dinner and drinks or a luxurious weekend break.

The stunning boutique bedrooms provide some of the finest accommodation in Whitstable – and with the beach almost literally on the doorstep, there’s no better base for a coastal Kent getaway.

Superb dining is all part of the Marine Hotel experience, with a stylish restaurant serving a modern British menu accompanied by breath-taking views. And with ingredients sourced locally wherever possible, there is plenty of fresh seafood on offer.

The bar and lounge offer beautiful sea views and traditional Kentish beers from Britain’s oldest brewer. Distinctive cask ales are kept in perfect condition, and the bar also serves a selection of international lagers and a good choice of wines.

It’s not just great beer and pubs that Shepherd Neame is known for, because Britain’s oldest brewer also offers stylish and comfortable accommodation at a range of unique venues across London and the South East, with more than 300 rooms available.

From boutique-style hotels in stunning coastal locations, to 15th century timber-framed pubs in beautiful villages, there is something to suit everyone. 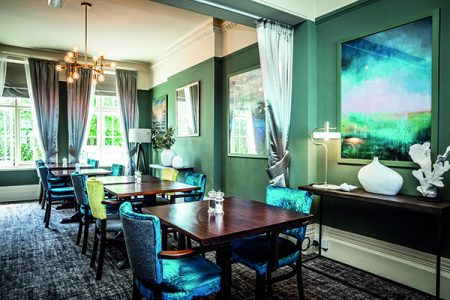 Sturts is a family run firm specialising in all aspects of interior furnishing for the domestic and commercial environment. This includes upholstery and reupholstery, curtain and blinds, polishing and re-polishing, as well as most aspects of floor finishes.

Trading for over 35 years, Sturts has a very large client base and has completed projects for a number of high-profile brands such as Shephard Neame, Punch, Star Group, EI Group and Greene King.

Having carried out refurbishments at the Marine Hotel for many years, Sturts was once again engaged for the current refurbishment. This included reupholstering of the existing lounge and bar furniture and the supply of new furniture and bench seating to the restaurant, reception and the newly formed orangery.

“We were grateful to be asked to carry out the furnishing works on one of Shephard Neame’s flagship hotel sites as the refurbishment covers all aspects of our trade. Personally, it is also appreciated that a company the size of Shephard Neame continues to support local family businesses such as ours.

“We pride ourselves on supplying a professional service to a high standard regardless of project size and location. It also benefits from having a consistent, hardworking team who have been with the company for many years who can maintain these standards.” 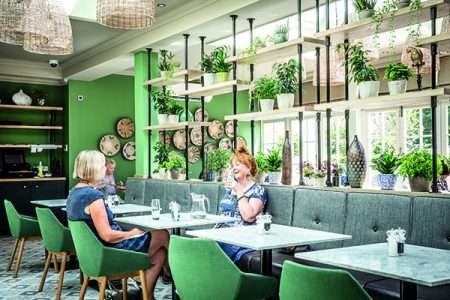 Threds Construction is a company that prides itself on its service to its clients and the quality of the work produced, this being shown by the completion of a project for Shepherd Neame at one of its very well-known hotels in the Whitstable area.

The Hotel is called The Marine Hotel and is situated overlooking the sea at Tankerton Seafront in Kent. The project was a complete refurbishment of the ground floor including doubling the size of the conservatory. This project was designed by a company called Design ID who collaborate with Threds Construction on many other projects including design and build where together they coffer clients a one stop service ultimately saving time and money.

Threds undertakes projects around the country, which has led to a new office opening in Worcester.

The Marine Hotel has been a fantastic project for Threds Construction and being local to their offices it has and will be a great show piece for the company providing lots of positive feedback. The company is always just a call away to provide help and is always pleased to help.