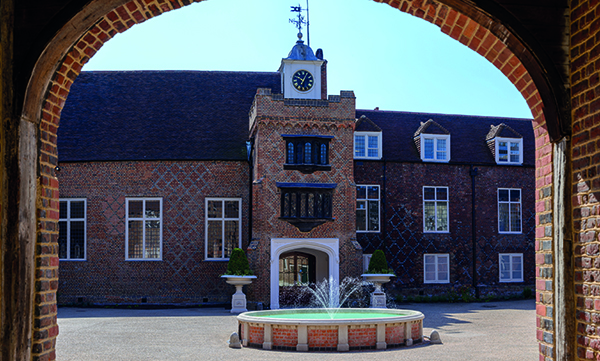 Following a major restoration project, Fulham Palace officially reopened in May with a brand new museum, a painstakingly restored Tudor courtyard and expanded collection of historically significant plants. The newly restored Palace is the result of a £3.8 million project, including £1.9m from The National Lottery Heritage Fund to revitalise the Palace and help more people discover its long and varied history.

The Palace is free to visit and the restoration has doubled the size of the museum, which has been completely reinterpreted and includes historic rooms never before opened to the public. It provides insight into both the long history of the site, and also the most notable residents, the Bishops of London, who called the Palace home for centuries, from AD 704 to 1973.

Visitors can now marvel at the restored Tudor Great Hall, explore the history of Bishop Compton and his legacy to British gardens and discover the Victorian chapel’s past through interpretation hidden in hymn books. Wherever guests go, there are interactive elements, and a ‘mood room’ explores the history of the building through sound and light.

Elena Faraoni of Fulham Palace said:
“Fulham Palace was quite a dilapidated building after it was vacated by the Bishops of London in the 70s. It’s already gone through two phases of restoration, and this project was the third phase. Externally we’ve done a lot of brickwork restoration around a lot of Tudor brick areas, taking it back to the Tudor mortar process so we’ve taken it right back to what it would’ve looked like.

“Then we’ve refurbished two internal office spaces which have been modernised and done very sensitively, and it’s got everything you’d expect a modern office to have. On the ground floor of the Tudor courtyard we turned old offices into a museum of the Palace. Whereas before they were just blank rooms, now we’ve got a new visitor reception, a shop and new suites of museum rooms to show off objects and interpret the history of the Palace. Round the back of the Palace we’ve reintroduced a path, making the site more wheelchair accessible and we’ve done soft landscaping; the gardeners have put in plants too, which recreate the historic gardens.”

The first temporary exhibition in the new museum celebrates the archaeological finds unearthed during the restoration project and celebrates the contribution made by volunteers in the restoration process. At the heart of the Palace, the Tudor courtyard once again looks proud and ready to welcome guests. It had been somewhat neglected over the years, and a patchwork of repairs scarred the brickwork façade. The restoration of the walls was painstakingly carried out over many months, with perished bricks being replaced with new ones made and fired using traditional Tudor techniques, as Elena stated.

Artisan Plastercraft undertook ceiling securing works, Lime Plaster repairs to multiple areas in the palace and restored Stucco busts, which are featured on the external portico of the palace. This involved taking a rubber squeeze of the broken Stucco busts, modelling the missing pieces in clay, and then restoring the original. Artisan Plastercraft has a passion for restoring the fabric of historic buildings and working to conserve Fulham Palace was a pleasure and an honour.

Elena finished:
“For the organisation as a whole, the project has brought the building back to life and it’s another entity to what it once was. It’s really amazing to see the comments in the visitor book and the enthusiasm. It’s a little historic gem and it’s a place visitors will stay very loyal to and keep coming back. And for me personally, it’s really rewarding to see it completed.”

Sian Harrington, CEO of Fulham Palace Trust added:
“The project marks a real change in the way Fulham Palace is enjoyed and understood for generations to come. We look forward to sharing the stories of the Palace, which was home to the Bishops of London for well over a millennium, with our visitors. This huge restoration project has really brought the soul back to the Palace and wouldn’t have been possible without a major grant
from The National Lottery Heritage Fund as well as our core supporters and volunteers, all of whom I would like to thank for their support in helping us realise our vision for the Palace.”