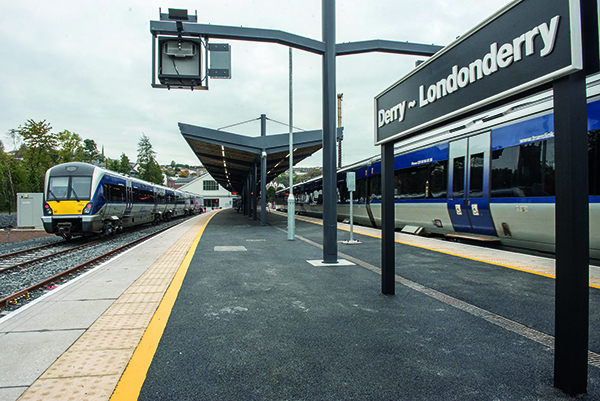 This is particularly true of the Derry-Londonderry line, where passenger numbers have increased by around 30% since the introduction of an hourly service during the summer of 2017.

Building on this success, work is now underway on the sustainable cross-border Transport Hub at the former Waterside Train Station in Derry-Londonderry.Local company Farrans have been appointed as contractors, working with internationally respected railway engineers Rhomberg Sersa JV.

Translink is working with a wide range of stakeholders, including SEUPB, DfI, the Irish Government, Derry City and Strabane District Council, Donegal County Council and Sustrans, to deliver this project.

Funding of £27 million has been secured from the EU’s INTERREG VA Programme, managed by the Special EU Programmes Body (SEUPB) with match funding provided by the Department for Infrastructure and the Department of Transport, Tourism and Sport in Ireland. This ambitious cross-border project, (with the potential to transform travel in the region), represents a major vote of confidence in the city and sits alongside wider investment in the Foyle area of approximately £55 million in public transport services in recent years.

The Hub will provide enhanced support for sustainable transport across the North West, encouraging a modal shift in transport and attracting visitors. The development also supports the local council’s Strategic Growth Plan to work in partnership to develop active travel. The North-West Transport Hub will allow for improved co-ordination between rail and local and cross-border bus services, as well as a Greenway link to the city centre and Foyle Street Bus Centre via the iconic Peace Bridge.

The Hub also provides a unique and vibrant area within the building, an open space where communities and organisations can share their stories, a venue for classes and events, or present new ideas, in a building that will be part of the fabric of Derry-Londonderry, as well as its’ wider celebrations and heritage.  The building is set to become one of the city’s best known venues in the weeks and months ahead.

Chris Conway, Translink Group Chief Executive, said: “This major project will be a key gateway to the North West, supporting business, leisure and tourism opportunities. The scheme also protects and secures the iconic Grade B listed Victorian station building, bringing it back to life after nearly 40 years and will also act as a catalyst for further regeneration in the wider Waterside area.

‘‘We’re confident that the new Transport Hub will build on this success by encouraging even more people to choose more active, sustainable modes of transport. Translink is committed to making public transport your first choice for travel in Northern Ireland, and the development of the Hub will move us closer to realising that vision. We are very excited about this project, and we look forward to working with our contractors and a wide range of stakeholders to deliver this major investment for the people of the North West.’’

Gina McIntyre, CEO of the SEUPB added: “This project is funded under the Sustainable Transport objective of the EU’s INTERREG VA Programme which supports the creation of more environmentally-friendly forms of travel. It will have a significant long-term impact upon cross-border travel in the North West.

“The project will also encourage more citizens to take up ‘active’ journeys through a new Greenway link into the city centre. In doing so, it will create a modal shift in how people travel, helping to reduce carbon emissions and improve air quality.’’

Most recently new enhanced passenger facilities and platforms opened, and work overall is scheduled to be completed by 2020.