The project also includes the provision of self catering holiday apartments within a stable block.

The scheme is being carried out by Main Contractors C. Sneade & Company, with Catalina Architecture as project architects. “C Sneade are doing very well, they are a good contractor, very approachable and have become part of the design team” said Mr Rory Wilson of Catalina Architecture.

Due to the building’s Grade 1 listed status, the works carried out in the project must meet the approval of both the local authority and Cadw – the Welsh Assembly Government’s historic environment division.

The majority of the refurbishment and remodelling within the main house is being carried out within the bakery wing, which had been semi derelict, but is now being fitted out to incorporate six new guest suites. Original features of the building are being retained and the works are being carried out using traditional construction materials and techniques and appropriate finishes from companies such as Farrow and Ball. 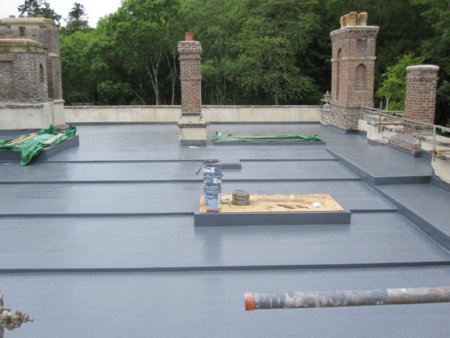 Works to the main house include the installation of rigid blown glass insulation; significant remedial treatment for dry rot; structural repairs to the walls of all rooms including the reception area which has also been re-decorated, and the upgrading of all building services. Both the main house and the bakery wing have also been re-roofed and new oak window lintels have been installed in these areas.

Within the south wing of the stable block, one large self catering apartment comprising a lounge, kitchen, bathroom and four bedrooms is being formed, with the creation of further apartments scheduled for a later phase of the work which will follow in a separate contract.

Currently the roofing of the main house has been completed and work in the stables is progressing well, with good progress also being made on electrical work within the main house and stable block. 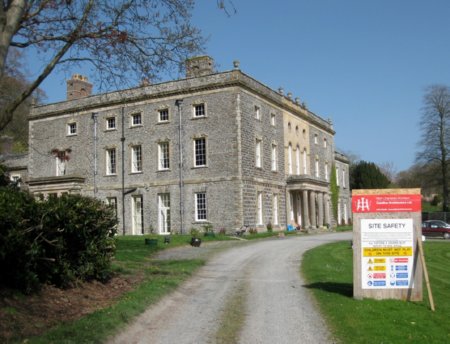 Nanteos Mansion is a Georgian building built in the Palladian style between 1739 and 1757 for the Powell family, on the site of a much older settlement. The present mansion is built around the walls of an earlier house, with the cellars dating back to the tenth century.

The mansion was designed to accommodate the needs of the gentry, particularly those addicted to hunting and entertaining. William Edward Powell (1788-1854) added to the main body of the building by adding butler’s and housekeeper’s quarters, a larger kitchen, the bakery and the billiard room. The completed house, with an impressive total of 69 rooms, was completed by 1847 at a cost of £2880.

The Powells gained their extraordinary wealth from owning lead and silver mines at Cwmystwyth and Llywernog, the workings of which can still be seen. However, the family’s fortunes dwindled after the First World War and the last Powell of Nanteos, the delightfully eccentric Margaret, died in 1951.

Upon entering the house, guests were received in the morning room (the first room on the left). The former library is now a bar, and is situated next to the ballroom where larger conferences and wedding receptions now take place.

The main reception room on the first floor is the Music Room. Its Italianate fireplace bears a delicate relief in white marble depicting Aesop’s fable of the Fox and the Stork. Its Rococo- style ceiling celebrates the four seasons, entwined with musical instruments.