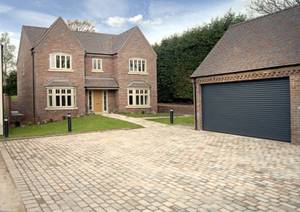 A small housing company which prides itself on going the extra mile for its clients can now reflect on that ethos after achieving a NHBC Pride in the Job Quality Award.

For co-founder of DKM Homes, Bridgnorth, Daren Guest, it is the first award with the company – his second in his career – but he considers it to be the most important as it was given in the face of stiff competition from bigger and well-resourced companies.

The new award was given for DKM’s project at The Grange, in Westgate Drive, Bridgnorth. It is a unique development of three new homes set in the mature grounds of a substantial late Victorian residence which was also refurbished in the scheme. The development is located within a short level walk from Bridgnorth town centre.

Daren said: “I think the award was given because of the quality of the workmanship on the project and the materials used. We set out to give clients their dream home and that means from the first brick to the last tile on the roof.

“We are proud of what we do and the tradespeople we use are ones that we are loyal to -and they are loyal to us. We are delighted that a small company can compete with the big guns of the construction sector and still come out on top.

“The award is also recognition for the standards we set out to achieve. It is a testament to the whole team.”

Daren, who is a carpenter by trade, has served a project manager with Barratt and later Taylor Woodrow, where he took his first NHBC Pride in the Job Quality Award. After redundancy, he decided to set up his own business which has grown successfully year on year.

The three new build units on the site include one four bedroom and two five bedroom homes, all with large gardens.

The new homes include high quality contemporary kitchens and bathrooms, generously proportioned accommodation and an up to the minute specification.

At the centre of the development sits the Grange, a late Victorian residence that has undergone an extensive refurbishment bringing the property up to date, including stylish, modern kitchen and bathroom installation, while maintaining the original features of this wonderful period home.

All of the properties sold quickly – including one which was snapped up when the builders had only just marked out the plot with pegs.

“The development enjoys a superb location in the grounds of an old manor in one of the last sites of this type left in Bridgnorth. The manor is set in one and a half acres and this creates a wonderful sense of space. This has been a very successful development and winning the award is just the icing on the cake” said Daren, adding that the company always tries to provide that little bit extra for purchasers. “Our first scheme involved the construction of starter homes and we included solid granite worktops in the kitchen specification – something that you would not normally expect in this price range” he added.

DKM is a residential development company that is dedicated to quality workmanship throughout the build process to ensure that its properties are of the highest quality.

The company’s next scheme is a luxury barn conversion project.

Through its continued use of established qualified tradesmen and contractors, DKM’s focus remains the delivery of high quality developments.