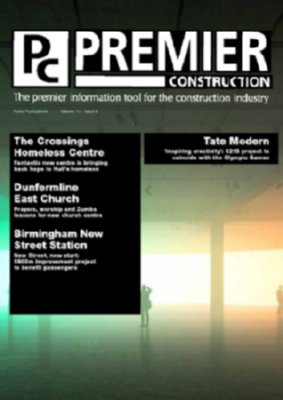 This month’s edition of Premier Construction focuses on new beginnings. We explore how buildings are not only an opportunity to reach towards the future, but a chance to build on the past.

T.S Eliot wrote: “What we call the beginning is often the end. And to make an end is to make a beginning. The end is where we start from.”

This is nowhere more apparent than in the construction industry, where structures are demolished and land obliterated in order to create new buildings.  It is a continuous cycle that ensures an endless supply of opportunities for growth and development.

The new Devilla Sawmill in West Fife has been built using the client’s own standard production timber. The trees that are cut down will live on through the new building, which will supply FSC certified timber for many more construction projects.

In April 2012, the new Sea City Museum in Southampton will open on the 100th anniversary of the Titanic disaster. This building will celebrate the tragic demise of the RMS Titanic and the rich history that it has brought to Southampton, in the process creating job opportunities for the local people.

Our history is also celebrated by the impressive new facilities at Tate Modern, whilst at Trumpington Meadows, remains from the Neolithic and Iron Age periods have been discovered.

Birmingham New Street, which has undergone little improvement since the 1960s, will see the old and tattered facades of the station renewed and the area renovated. Meanwhile in Cuckfield, the beautiful Ockenden Manor spa retreat is to be built in the derelict walled garden, which in the Victorian era was home to accommodation and workshops for the gardeners.

New starts can also be seen in the new The Crossings Homeless Centre in Hull, which will give hope back to the homeless, and the construction of a centre for the Dunfermline East Church of Scotland.

We now invite you, readers, to join us as we unearth our past to build our future.

We would like to invite you to view the fully-interactive digital version of our latest issue via this link.