Works on the £9.8m project will be split into two phases: Phase 1 will comprise enabling works for the South Eastern Trust, South Eastern Regional College and PSNI, and Phase 2 will be the construction of four office blocks. The project began this month (October) and is expected to be complete in June 2012.

The Minister said: “By leasing the wing of the Downshire Hospital to the council it ensures that this building will continue to be used for the benefit of the local community. This building is currently surplus to our requirements and the council’s investment will secure its long term future.

“I want to acknowledge the foresight of the council for recognising that this facility can have an important role to play in serving the population of Downpatrick.

“This redevelopment will ensure that Downshire Hospital remains at the heart of the community offering first class health and social care services alongside a modern facility with a long term tenant.” 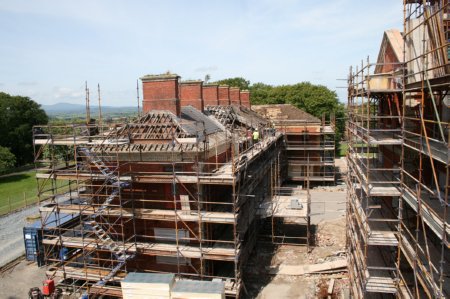 O’Hare & McGoven are the main contractors and WDR & RT Architects are the architects for the project, which will see a double-storey glazed entrance for the new purpose built multi-storey office building. The administration centre will link through to the existing building and the wing will be partly demolished and partly refurbished for office and commercial use.

The landscape design proposals are influenced by the surrounding parkland context. Sustainable technologies have been applied within the hard landscape detailing and gardens and seating areas will provide attractive social areas for staff and the public.

Mr Hugh McCaughey, South Eastern HSC Trust chief executive, said that the move demonstrates the South Eastern Trust’s commitment to both improving the health and well being of local people, and  to the overall economic development of the area.

Downshire Hospital opened on 8th October 1869 with 333 beds.  Over time, the hospital grew in size and additional accommodation was provided to meet increasing demand for mental health care. By 1957 the Hospital accommodated 1,123 inpatients.

Major changes in mental health care occurred in the 1960s and by the 1980s, patient mental health care was concentrated in one end of the Downshire, making use of supported housing at Slievegrane and Acute Admissions at Finneston House.