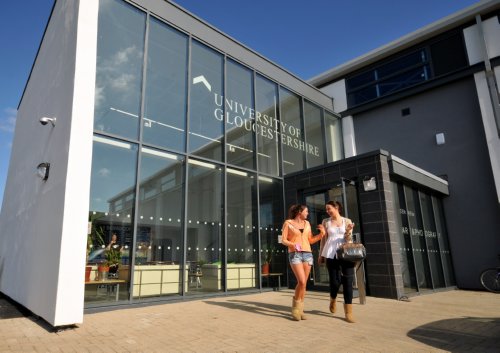 A £5.3m project to transform existing facilities on the Hardwick and Park campuses at the University of Gloucestershire is now complete. Speller Metcalfe Limited were the main contractors and Architect Design Partnership the architects for the project, which began in March 2011 and was completed over summer.

The scheme has comprised three separate projects: the refurbishment of the sports hall on the Hardwick site in order to develop an Art & Design photography centre, and the simultaneous refurbishment of a refectory and the development of a media centre at the Park campus.

The Hardwick development was originally a sports complex, comprising a large sports hall that covered around two-thirds of the floor space along with a gymnasium and work room. The building was stripped back to the original structural frame and the windows were installed at a higher level before the building was completely refitted and the space subdivided in order to provide an Art & Design facility at one end and a photography unit at the other.

External works comprised the demolition of an old swimming pool and the installation of car parking for the side and front elevations. In addition, a significant CCTV system was installed and all of the external perimeter fencing was replaced and upgraded. A significant aspect of the project was the removal of asbestos from the old building prior to demolition.

At the Park campus, the existing refectory was combined with the student union to provide a daytime refectory and an evening bar facility. In the old student union, the existing bar facility was demolished and the building was stripped back to the original structural frame before being subdivided and extended in order to house the new media centre. Inside, there are a number of specialist facilities – including a news room and performance bases – which are soundproofed in order to meet DBA ratings.

The Park campus remained operational throughout the project, whereas the Hardwick campus was completely closed.

Nigel Wichall from the University of Gloucestershire said: “At both the Hardwick and Park campuses, we took existing buildings that were quite tired and dated and made them into modern spaces for students.

“It was mandatory to get planning consent for both sites, including for the small extension at the Park campus and also the external works and modifications at Hardwick. The only real restriction that we had was the demolition and preparation of the buildings for refurbishment, especially with regards to removing asbestos.

“All of the contractors worked very well together and works have been finished to a high quality. This project was interesting as we have utilised the old facilities in order to create some rather exciting new ones. We are extremely pleased with the outcome.”

The University of Gloucestershire has been educating students for almost 200 years, offering cutting edge facilities in inspirational locations. The University says: “We believe in education for all, not just in the classroom, but in how we live our lives.”