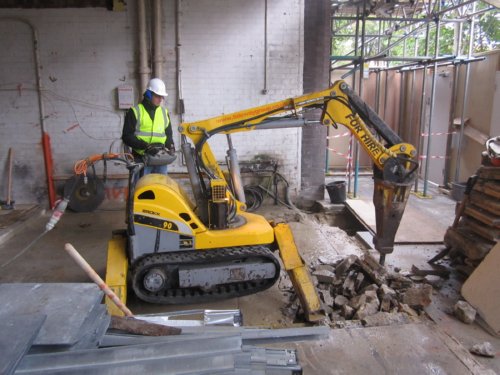 The Park Theatre project is now well underway, with a scheduled completion date of October 2012.

The £2.5m project will see the transformation of an existing building into a state-of-the-art theatre and modern apartment complex.

With uses varying throughout the years from a Blacksmiths to most recently a centre for the charity organisation ‘Sense’, the building has undergone several refurbishments and extensions. Unfortunately, many of these have been of poor quality and have left the building in a state of disrepair.

Designed by architects Hugh Jones and Farrell, the project will restore the building to its former glory and re-establish it as a landmark in the Finsbury Park area. Located in close proximity to the Finsbury station, the theatre is situated in an area that is home to a high concentration of Arts industry professionals.

In order to convert the building into a theatre, several necessary modifications have been made. These include raising the roof to accommodate the technological galleries and careful removal of a portion of the upper ground floor slab to gain the double height aspect inside the main auditorium.

As the lighting rigs required for a theatre draw a high voltage current and the capacity wasn’t available on the existing network, the incoming voltage cable street from the street has been removed and a substation has been installed. As a result of this major undertaking, the theatre now has unlimited electricity.

In addition, the gas supply has been taken back to the meter and the water connection has been diverted and brand new connection installed.

The theatre features two separate auditoriums, with a capacity of 200 and 90 people respectively. On the ground floor, there will be a foyer, bar and box office. Above this on the first floor, there will be a bar and a cafe with a cantilevered glazed bay area. This bay area will be a prominent feature for members of the public during their commute to Central London via Finsbury park, situated at the end of Clifton Terrace.

Other facilities will include: a green room, three dressing rooms, wardrobe, prop store and public and disabled toilet facilities. 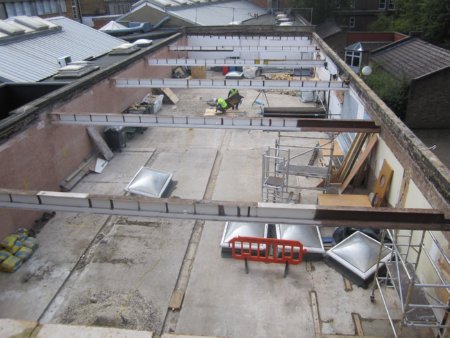 Jordan Russell, freelance project manager, described some of the interesting features: “The main auditorium will feature a tension wire grid, which will allow the technician to move silently above the stage and shine light through the grid without interrupting the main beam of light. This is a relatively new system that has been used in some of the more prestigious venues, such as the Camden Roundhouse.

“An open atrium space between the bars and the front of the building and the auditoria will make it possible to look down to the lower ground floor, where the stalls are for the main auditorium. Alternatively, spectators may gaze upwards to view the upper ground floor, which is where the circle level of the main auditorium is. Another interesting aspect is a glazed bay area that extends out over the payment, providing an eye-catching feature that people will see as they emerge from Finsbury Park station.

“Not only will the auditorium be fitted out to a high standard, but the back of house area will benefit from air conditioning, ventilation, heating and a modern fit out.

“This is an extremely interesting project as we are completely changing a building that has undergone many transformations over the years, most recently in the 1950s and 1960s. The project is progressing very well and everyone is pleased with what we have achieved so far.”

A unique aspect of the project is the two-floor extension of the existing building in order to create a modern apartment complex. The sale of the one and two bedroom apartments, which are valued around the £250,000 mark, is an integral part of the cash flow needed to complete the project.

Main contractor for the project is Forgewood Group Limited.