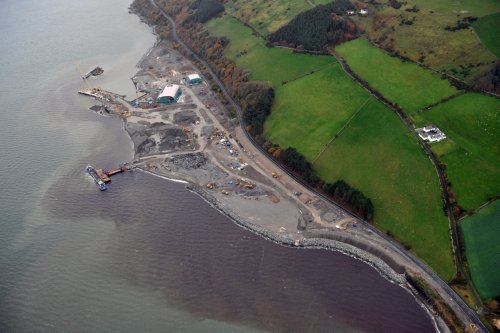 The scheme is necessary to satisfy the legal requirements of the Urban Waste Water Treatment Directive and Shellfish Directive, and will deliver significant improvements to the water quality and shellfish environment in Loch Ryan.

The project involves collecting and treating flows from various locations around Loch Ryan before discharging them into the Irish Sea (the flows have previously been discharged into the Loch).

The scheme is being carried out by a Leslie MWH joint venture, with the works based in various locations over the course of the project programme.

At Cairnryan, a newly constructed joint tertiary treatment works will serve the needs of the village and the new Stena terminal nearby. This has many advantages – an 8km pumped waste water main is no longer required to Stranraer. A shorter 2km main to the new WWTW will reduce construction costs and total life cost of the project.

Stephen Hepburn, Construction Manager, Scottish Water, said: “This is great news for the area. After years of studies and surveys to assess the best option for an extremely difficult civil engineering challenge, Scottish Water is removing the permanent discharge of waste water to Loch Ryan.

“The waste water from the surrounding communities will receive a greater level of treatment than is currently provided.”

He said: “The construction work is having a minimal effect on local residents and businesses. We will continue to extensively consult local people and groups in the region as we have previously.”

“This consultation ensures our project progresses in harmony with the various community interests in and around Stranraer.”

Scottish Water has kept the community informed to date by holding regular local stakeholder meetings, distributing a frequent email newsletter, briefing councillors and council officials and attending community council meetings. This work will continue over the course of the project.

The Loch Ryan project aims to give the town of Stranraer and the smaller communities which surround Loch Ryan the same quality of waste water treatment as the rest of Scotland.

Speaking on a recent visit to the Loch Ryan Project, local MSP Alex Fergusson said: “What gives the Loch Ryan project an even greater level of importance in this particular instance is the huge potential for Stranraer that lies within the entire redevelopment of the waterfront, following Stena’s impending move up the loch. This presents a fantastic opportunity for Stranraer, which will be all the easier to grasp if the quality of the water in Loch Ryan is of the highest standard. This massive investment by Scottish Water will bring that about sooner rather than later, and I welcome it.”

The project is expected to be complete by Autumn 2012.

The Leslie MWH Joint Venture (JV) is a fully integrated JV with local civil partners, delivering both water and wastewater as part of a framework for Scottish Water. The JV has local offices and staff based in Barrhead, Glasgow.

“This project will deliver significant improvements to the water quality and shellfish environment in Loch Ryan. The effluent from the surrounding communities will receive a greater level of treatment than is currently provided, and the permanent effluent discharge will be removed and re-routed to a new WWTW in the hills to the south west of Stranraer.

“The reason we decided to route all the flows to one single WWTW is because this option offers the best whole life cost, as well as satisfying the environmental, planning, third party and operational issues for the Loch Ryan cluster of schemes.

“The current Port Rodie WWTW hosts large underground settlement tanks which provide primary treatment. Sludge is extracted via valves above ground. Our project will re-use these tanks as storm storage within the network, providing relief in times of exceptionally heavy rainfall. Exceptional storm flows will be directed along the current outfall pipe so there is minimal impact on the waters of Loch Ryan. Once any heavy rainfall abates we can re-direct stored storm waters to the new WWTW.

“A number of outfall locations for the new WWTW were considered along the coast, both north and south of the harbour town of Portpatrick. Some were more suited to specific potential treatment works locations. The main considerations were: geology of the coastline; accessibility for construction plant and equipment; sufficient space for construction at the landward side of the construction; availability of a fresh water supply to assist in drilling operations; length of outfall pipeline to ensure 1:50 dilution in the sea water; and provisional cost for construction. The potential environmental impacts from the outfall construction operation were also an important factor.”

One of the local villages, Cairnryan, was originally part of the overall Loch Ryan scheme. With the addition of the new Stena ferry terminal at Cairnryan, a deal was reached to treat effluent from the village at a new WWTW at the terminal, which would be jointly funded and would also treat the ferry terminal waste water.

This has many advantages. An 8km pumped waste water main is no longer required to Stranraer. A shorter 2km main to the new WWTW will reduce construction costs and total life cost of the project. The new waste water main will direct flows from Cairnryan into the terminal, and the existing small WWTW at Cairnryan will be retired.

The new WWTW offers tertiary treatment, so the treated effluent will have minimal effect on water quality in Loch Ryan. The Stena Terminal WWTW will be adopted by Scottish Water once complete.

The planning applications and negotiations were led by the Scottish Water Planning Team. Catherine Souter-Bell, Planning Consultant with Scottish Water’s Shared Services team, said, “Extensive discussions and negotiations were held with Dumfries and Galloway Council on the design of the pumping station. We eventually settled on a design that was harmonious with the overall look of the buildings in Stranraer.

“A more modern design with a curved roof was deemed inappropriate, so we submitted a traditional design with a pitched roof which fits in with the character of the surrounding area. The pumping station was also designed to fit with the aspirations of the Stranraer Waterfront Urban Design Strategy and Masterplan.

“The proposed waterfront location for the Port Rodie pumping station was also the source of some local opposition. Although it is adjacent to the site of the current WWTW and as such a large amount of existing underground infrastructure could be re-used, we had to successfully demonstrate that there was no other practical location for the pumping station other than Port Rodie”.

Mark MacLaren, Scottish Water regional communities manager, details the ongoing work to consult the community: “A community forum has been established by Scottish Water, which meets regularly to update various community groups (resident associations, Chamber of Commerce, Police, Harbour Masters, community councils etc.) on the progress of the project. The community forum acts as a one-stop-shop for discussion of any concerns or queries directly on a face-to-face basis with the project team.

“This direct approach has paid dividends. Community organisations and individuals have commented positively on the open and transparent way Scottish Water is consulting and sharing information with them, and this approach is set to continue through the construction and commissioning phases of the project.

“An E-letter has been sent out every few months to update local stakeholders and residents on the work. This approach has enabled Scottish Water’s project communications team to save costs on mailing, as most recipients are happy to get the information electronically.”

Dedicated pages on the Scottish Water website are updated regularly with the E-letters, press releases and project information.

Stranraer provides an important ferry service to Ireland and is the birthplace of an illustrious list of famous people, including footballers and authors.

Stranraer is Dumfries and Galloway’s second largest town and the administrative centre for West Galloway (Wigtownshire). The town is home to 13,000 people – major employers are the Caledonian Cheese creamery and the aforementioned ferry terminal. Stranraer has a rich maritime history, being a major Scottish port for centuries and a key location for anti U-Boat work in World War II.

Stranraer itself sits on the bank of Loch Ryan,a sea loch bristling with Scotland’s only natural oyster bed.