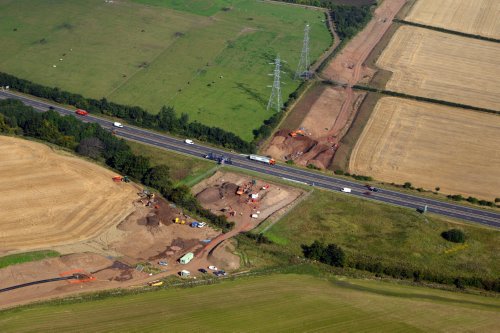 CEEQUAL is the assessment and awards scheme for improving sustainability in civil engineering and aims to demonstrate the commitment within the civil engineering industry to put environmental quality and community support at the heart of a project.

Since the CEEQUAL scheme was launched in 2003, more than 60 final and 20 interim CEEQUAL Awards have been given. Glencorse is clearly among the upper echelons of such projects, having been awarded a rating of 84% – well above the minimum for the top banding.

Minister for the environment Roseanna Cunningham checked up on the progress of the works as it entered its final construction phase.

Ms Cunningham was delighted to view the massive strides being made in this important project:

“I am delighted that the residents of Edinburgh and visitors to the city will soon be enjoying some of the highest quality drinking water inScotland from this state of the art treatment works at Glencorse. The new works uses the latest technology and will be more resilient and better able to cope with changes in the quality of the source water.

“I have been impressed by the efforts made by Scottish Water to minimise disruption to local residents during construction. Great care has also been taken to ensure the works will blend in with its surroundings and have as small a carbon footprint as possible. This is truly a treatment works for the 21st Century.”

The minister discusses the work

When completed, the Glencorse WTW will supply good, safe drinking water to around 450,000 consumers in Edinburgh and parts of Midlothian.

The works have been carefully designed to have minimal impact on the landscape. The construction has been sunk into the ground such that the highest point of the building will be just 7 metres above ground level. Furthermore, green roof technology will be used to cover the tops of the buildings. This ‘living’ roof means that the works will blend into the countryside and the final landscaping bunds will make the works almost invisible from surrounding properties and the main road.

As part of the project, Scottish Water is installing 15km of new pipelines. The twin pipeline will take the clear, fresh drinking water from Glencorse into the existing water supply network inEdinburgh. Instead of having the pipes produced elsewhere and transporting them to the site, a mobile pipe production plant was set up adjacent to the pipeline working area. This unique approach meant that the pipes could be manufactured significantly longer; at lengths of up to 22 metres rather than the normal maximum that can be transported on a standard lorry of 13.5 metres. Longer pipes equal fewer joins and a significant reduction in the construction period.

The location of the plant also meant a reduction in lorry journeys to and from the site of up to 75 percent. This has helped to minimise the carbon footprint of the project. The majority of the work will take place in agricultural fields but the pipeline does need to cross public roads at some points. Scottish Water has been working closely with the local communities in order to minimise disruption.

The route of the pipeline has taken account of several important issues such as:

The treatment process at Glencorse will consist of:

Coagulation – Colloids and other impurities in the raw water need to be removed. Coagulants like alum (Aluminium Sulphate) are used to help bind the impurities together to form particles. This process is called solid-liquid separation, and requires precise dosing (measurement in milligrams per litre) and pH control along with good mixing to be effective.

Flocculation – By adding chemicals called polymers, the particles formed during the process of coagulation are further increased in size for effective removal. The choice of the polymers used may differ with the quality of the raw water.

Dissolved Air Flotation (DAF) – This is a clarification process in which the impurities are floated to the surface, instead of being allowed to settle at the bottom. A mass of fine bubbles is created by saturating the water with air under high pressure, and these are then released and mixed with the flocculated raw water to help float the impurities to the surface.  These impurities gradually collect to form a layer on the top which is skimmed at regular intervals into a separate channel, whilst the remaining water underneath, is allowed to pass onto filters.

Rapid Gravity Filtration – This process removes any remaining impurities through filtration using either sand or a mixture consisting of anthracite (coal) and sand.

CoCoDAFF – Glencorse will be design using the innovative CoCoDAFF (Counter Current Dissolved Air Flotation & Filtration) system. This method of treatment combines the dissolved air flotation and rapid gravity filters into one process unit. This reduces the treatment works foot print size and reduces the size of the flocculation tanks as some flocculation occurs in the CoCoDAFF units. This helps significantly in achieving the “low impact” building and aids in visual mitigation of the structure(s).

Sludge – This is the by-product left over from the clarification and filtration processes. This is disposed of by passing it directly to the sewer where it can be treated in a waste water treatment works away from Glencorse.

Find out more about the project by visiting www.scottishwater.co.uk/glencorse