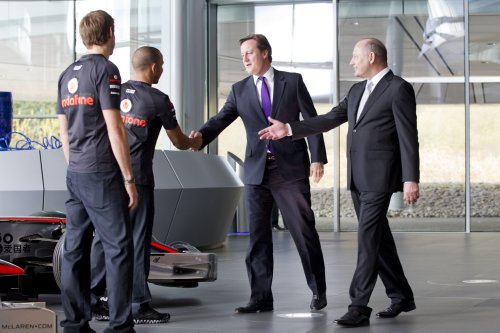 The new state-of-the-art McLaren Production Centre (MPC) hit the headlines in November 2011 when it was opened by Prime Minister David Cameron.

The prime minister was given a tour of the site by McLaren chairman Rob Dennis and took the time to speak to MPC employees. He also met the British drivers Lewis Hamilton and Jenson.

“We all want this to be a country where we’re respected once again for what we make as well as the services and finance we provide – vital though they are.

“And there are people out there who say that can’t happen because the base has gone – the skills aren’t there; Britain doesn’t make enough things any more upon which to build. And so they conclude that our glory days of science, engineering and manufacturing are behind us, and that from now on it’s going to be about buying from the world rather than selling to the world.

“What McLaren does here in Woking is a powerful rebuke to that view. And one of the things that has so impressed me today is it’s not just about the extraordinary Formula 1 cars that you make or, indeed, the incredible new cars we’ve just been looking at – it’s the technology, the invention, it’s the patents, it’s all of that innovation that is going to lead to so many other great businesses in the future.” 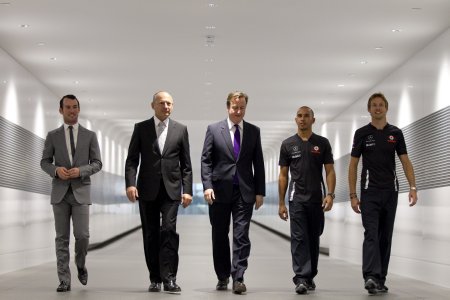 The £50m McLaren Production Centre now houses the assembly of McLaren Automotive’s range of high-performance sports cars, including the recently launched MP4-12C. It is expected to support up to 800 jobs and manufacture approximately 4,000 cars by 2050.

Main contractors Sir Robert McAlpine and architects Fosters + Partners carried out the project in conjunction with McLaren. As an Official Partner, Pastorelli provided a staggering 200,000 floor tiles for the construction – enough to stretch from this site to McLaren London’s new home in Knightsbridge.

Fosters + Partners also designed the award-winning McLaren Technology Centre (MTC), which is located to the north east of the new development. The two buildings are connected by a subterranean walkway and share a common language of details and materials.

The 34,500m² MPC is a flexible two-storey structure with a linear design that mirrors the flow of the production line. One of the most striking features is the entrance, which comprises a circular glass drum beneath the overhang of the roof canopy.

Designed to be highly efficient, the new McLaren Production Centre features a range of sustainable technologies. The building has incorporated a low energy system of displacement ventilation, whilst the roof collects rainwater and has been designed to integrate photovoltaic cells in the future. No soil was removed from the site during construction and all excavated material has been used to conceal the building within the green-belt landscape. 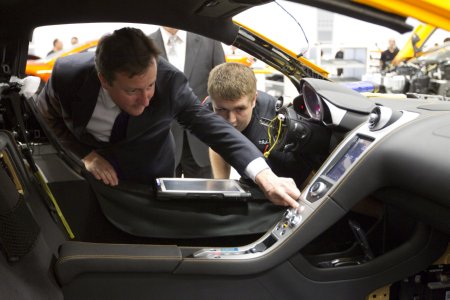 Chairman of McLaren, Ron Dennis, said: “We have long held the dream of building a range of McLaren high-performance sports cars that take the raw elements of Formula 1 principles, processes and performance and forge them into a unique package: one that offers customer-focused requirements of quality, efficiency, comfort and reliability.

“Investment in the new facility confirms our intention to challenge convention at the highest levels of automotive design, from a high-tech home that I am proud to say will deliver jobs, expertise and innovation in manufacturing and engineering.

“During the entire design and build phases of the McLaren Production centre, we were acutely aware of the need to create a space to complement the existing structure of the McLaren Technology Centre.

“Finding a solution that could function within the existing landscape was particularly challenging, but I’m pleased to say that Foster + Partners ensured a seamless continuity between the two buildings, while also allowing the MPC to exist independently as its own unique space.

“It is a legacy of our partners’ commitment, passion and adaptability that we were able to commute this shared vision into such a striking, unified and functional piece of design and architecture. The efforts of Pastorelli have been essential in bringing such a lengthy design and build process to a hugely satisfying conclusion.”