The Hans Price building on the Weston College campus has been transformed into a 21st century conference and function facility.

The building was named after Hans Price (1835-1912), a notable architect who was responsible for much of the development of Weston-super-Mare during the Victorian era. Unfortunately over the years the building had fallen into disrepair and was in need of a complete refurbishment in order to meet the needs of a new generation of students.

Work began on site in April 2011 and the intensive refurbishment programme was completed in the December. Main contractor for the project was Bray & Slaughter and the architects were Arturus Architects.

Work included the complete internal strip-out of building and the change in layout from many small rooms to large spacious rooms that may now be used for a range of conferences and functions. In addition, new floors were installed and all M&E services were replaced. 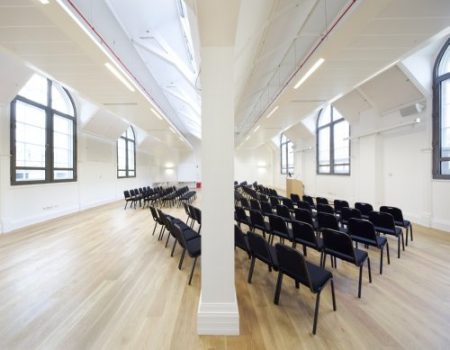 “This is a Grade II listed building and as a result, it was important that the refurbishment was sympathetic to the original design.

“Although the interior has been transformed from a very old fashioned space into a modern area, we’ve kept as many original features as possible and incorporated them into the new design. We have restored the stonework and tiling and have retained the impressive stone pillars and archways, along with the woodwork, roof beams and window handles.

“The project progressed well and everyone is very pleased with what has been achieved. There are always some surprises when working with a listed building, but it has certainly made it interesting.”

Bray & Slaughter enjoy a strong working relationship with Weston College and their completion of the Hans Price development builds on the work they have recently completed on the South West Skills and Knightstone campuses. The company organised a student site visit during the project and were one of the sponsors of the annual Weston College Celebration of Success student awards evening in January 2012.

Weston College has been an important part of the local community for more than 150 years and is now one of the top performing colleges in the region. The College celebrates significant success rates, with examination achievement rates at 99.8% for A Level and 100% for vocational courses. Ofsted has praised the exceptional attainment of the College and has recognised the high quality teaching and state-of-the-art resources.