The new Athlone Art Gallery in Westmeath will engage the local community with a range of exciting art exhibitions when it opens in the autumn of 2012.

Located on a spectacular site on the banks of the River Shannon, the gallery lies adjacent to the Athlone Bridge and the neo-baroque St. Peter and Paul’s Church. The development is also situated on the site of the medieval town defences, namely the Connaught Tower.

Under the project, the existing Father Matthew Hall will be sympathetically restored and transformed into a modern art space that will include a new ‘white box’ gallery wing.

The development will incorporate a 115 sq m gallery within the former Father Matthew Hall, along with a 145 sq m ‘white box’ gallery. Although the galleries will cater primarily for the visual arts, there will also be an emphasis on meeting local audience needs in terms of art exhibitions and engagement.

Also included in the scheme are informal meeting areas for the public and administration offices for the Athlone Art Gallery management and staff.

For the refurbishment aspect of the project, the Father Matthew Hall will be re-rendered and re-roofed in slate, whilst internally the building will be stripped back to the bare walls and roof structure. Whilst the refurbishment scheme will significantly update the building, all efforts have been made to retain the historical character of the important landmark.

The new gallery wing will boast an innovative palette of materials, including rough cut horizontal limestone strips in varying widths and zinc-clad roof lanterns that will be set back from the parapet wall in order to highlight the use of limestone and centralise the light penetrating the gallery.

Once the project is complete, the new Athlone Art Gallery and the Abbey Road Artists Studios will operate together to promote educational initiatives. 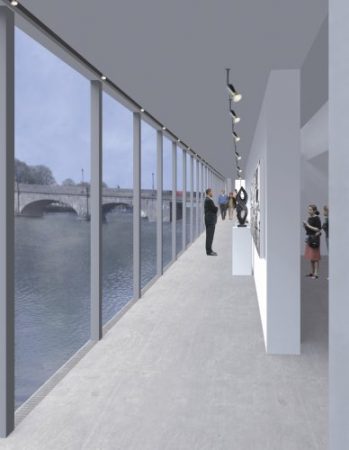 Main contractor Purcell Construction and architect Keith Williams Architects are carrying out the scheme for Athlone Town Council. Midland Heating and Plumbing Ltd have provided all of the heating, ventilation and control systems whilst working closely with the design team and main contractor to deliver the project.

It is the third commission for Keith Williams Architects in Athlone, following the successful completion of the multi-award winning Athlone Civic Centre and Library in 2004 and the town’s Army Memorial in 2010.