A brand new scheme is being implemented in County Cavan in order to reduce congestion in the town of Ballyconnell.

The N87 Ballyconnell Inner Relief Road scheme will reduce the volume of traffic travelling through the town by linking the N87 national road to the R205 regional road. The project includes the construction of 1.8km of carriageway and the installation of associated lighting, lining and signage and a river bridge. At a construction cost of €3.45 million, the scheme is being implemented by Cavan County Council in conjunction with the National Roads Authority.

Gibson Bros (Ireland) Ltd is the main contractor for the scheme, whilst John Wilson from Cavan County Council is the project manager and Brendan Smith and John Kearns are the resident engineers. Tony Mortimer and Sean McDonnell from Atkins are the consulting engineers.

The bulk of the N87 Ballyconnell Inner Relief Road scheme involves the construction of 1.3km of carriageway and an additional 0.5km of ancillary roads, including two roundabouts and associated junctions. Work began on the scheme in June 2011 and is scheduled for completion in July 2012.

“The scheme is progressing well with no major problems and without many disruptions to road users and services.

“As we’re effectively constructing a brand new road, most of the work is taking place away from the main route. With the exception of maintaining access for local farms and businesses, the work is pretty much self-contained.

“One of the most significant elements of the scheme is the inclusion of a 38m clear span bridge that carries the road at a high level over the Woodford River.

“The bridge was constructed using precast concrete beams, which were manufactured offsite and then transported to the site for installation. Each beam weighed 95 tonne and required a crane with a lifting capacity of 800 tonne in order to hoist them out over the river and into place. 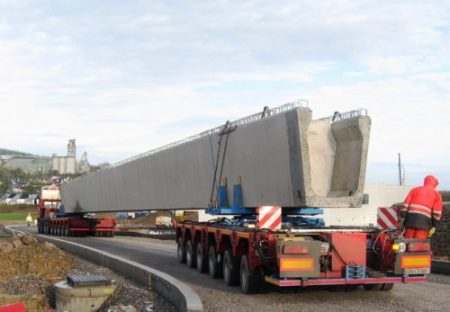 “This part of the scheme involved a considerable amount of preplanning and detailed consultation with Waterways Ireland. Careful consideration was made to ensure that the navigation of the river was still achievable once the bridge was in place.”

“The bridge was a critical part of the scheme as it provides a vital link for the town and is one of the largest bridges to ever be built in the county.

“The bridge proved to be a massive challenge as we had to coordinate with a number of different teams to deliver all of the beams, but luckily the weather was on our side and it all came together as planned.”

“It is very important and very satisfying to see a scheme like this being implemented in Ballyconnell.

“Cavan County Council identified the need for this relief road a number of years ago and although it has taken a while to reach the construction phase, it will be of great benefit to the town when it is complete.