Horton Halls Phase II began in July 2011 and has seen the construction of a new development on the Grove site in Tooting that replaces the existing student housing. The project follows on from Phase I, which was completed in 2007, and has reunited main contractor Willmott Dixon and leading architectural practice Hunters.

Comprising approximately 3,000 sq metres of space, the five-storey development includes 154 en-suite bedrooms in a mixture of four to eight-bedroom flats. All of the rooms will benefit from wider beds, softer carpets and larger en-suite bathrooms.

Additional facilities will include a communal lounge/recreational area and a laundry, along with bike stores for eco-friendly students.

“Horton Halls Phase II responds to an increasing demand for high-quality halls of residence. The new development will improve quality and increase capacity, whilst the en-suite pods cleverly maximise the use of available space.

“We have designed the building using feedback from former residents, which has allowed us to address any issues. In addition, we held informal meetings to review certain aspects of the design – including some of the colour schemes.

“One of the main challenges has been the speed at which we have had to get the building up and operational for the students, who will be arriving at the end of September. As a result, we got Willmott Dixon on board as early as possible and have liaised with them closely throughout the project.

“We are very excited to deliver this new accommodation for the students of St George’s and at the risk of scuppering it, the project is going very well, so far.”

The development has been built using a steel frame construction that is clad in brick and render. Designed to achieve BREEAM Excellent status, the accommodation features a range of sustainable features, including high quality insulation and a combined heat and power plant for heat and electricity. 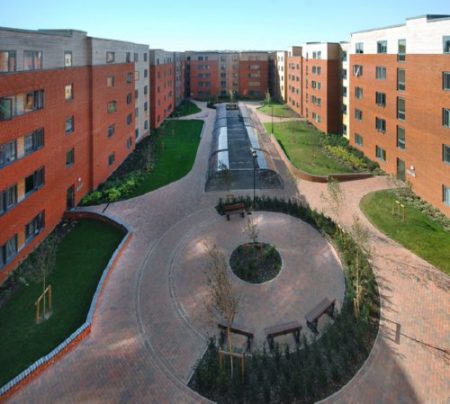 “This project was very important to us as it was a major development. The success of this project led to a number of additional projects with Willmott Dixon which has also been equally as important.”

“The speed of the project was a key factor in the decision making process of Willmott Dixon. By manufacturing offsite, the EOS Load Bearing System allows the build programme to be significantly reduced whilst minimising time spent on-site.” 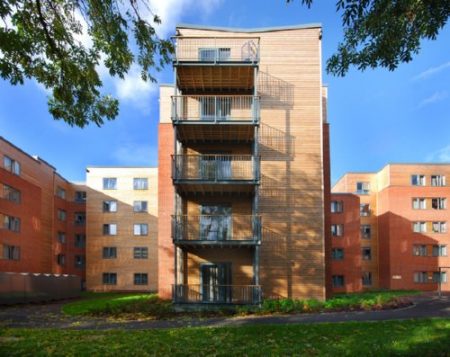 Horton Halls is named after Professor Roger Horton, who joined St George’s, University of London in 1979. During his time at the university, Professor Horton rose from lecturer of pharmacology to Vice Principal, and held a range of appointments including Vice Dean of Undergraduate Medical Education and Dean of Preclinical Studies.

Professor Horton retired in August 2007 and Horton Halls Phase I was officially opened by Her Royal Highness The Princess Royal on 23rd January 2008.

Among his many achievements, Professor Horton was involved in improving student support facilities and rebuilding student residences. The new Horton Halls accommodation, named in his honour, is scheduled for completion in August 2012.

Established in 2006, EOS is a leading manufacturer of light gauge steel frame solutions for use in the construction industry. The company design and manufacture steel for use in a number of applications including Load Bearing Systems (LBS) that is NHBC certified up to 9 storeys, in flooring and roofing and for use on external facades.

EOS has been involved in a number of interesting projects with Willmott Dixon in the past including Shortheath , Birmingham; Bedford Academy, Bedford; Basingstoke Road , Reading; Waterhead Academy, Oldham; and Eltham Baths, London. Other prestigious jobs include King’s Cross Station, Victoria Halls, and Copenhagen Place all based in London.