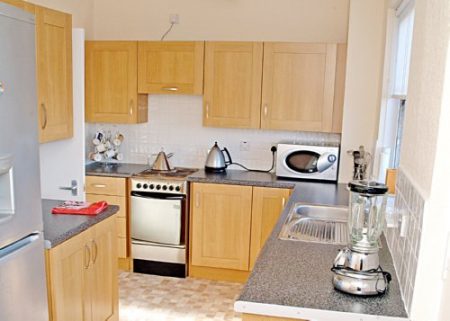 An exciting £3.5 million project will see the extensive refurbishment of 177 properties at Greenhill Court, Rutherglen.

The development, owned by South Lanarkshire Council and varying between five and nine storeys, comprises five blocks of one and two-bedroom flats, each of which will be carefully renovated.

Another major feature is the provision of a new concierge station to improve security and a range of environmental improvements – including the painting of the blocks, the provision of parking and landscaping.

The project began in October 2011, with Lovell as the main contractor and Cooper Cromar as the Council’s representative.

Partial funding for the external fabric upgrade, energy efficiency measures and heating replacement has been sourced from the Community Energy Saving Programme (CESP), which aims to reduce carbon emissions and alleviate fuel poverty in areas of low income through the development of community-based partnerships between Local Authorities, community groups and energy companies.

“This latest contract win shows that Lovell is continuing to reinforce its position as a market leader, with a proven reputation for delivering successful energy efficiency projects in the affordable housing sector.

“The project is expected to take just over a year, during which time the improvements to the existing flats will have a significant impact on tenants’ fuel bills while also reducing carbon emissions.”

Energy efficiency is a key priority for South Lanarkshire Council and the improvements at Greenhill Court will have significant benefits for its tenants, who will remain in residence during the project.

The project is expected to be completed in January 2013 and is part of South Lanarkshire’s Housing Investment Programme – HomeHappening.

Over the last eight years, HomeHappening has improved the quality of life for thousands of South Lanarkshire Council tenants. One of their most important aims is to ensure that all of their homes meet the Scottish Housing Quality Standard by 2015, and the HomeHappening programme is concentrated on upgrading and improving properties to meet this target.