It’s been another busy year for award-winning developments across the UK. 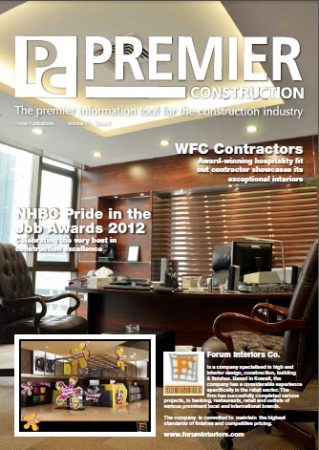 It’s been another busy year for award-winning developments across the UK. In this month’s edition of Premier Construction, we celebrate the projects that are putting our construction industry on the map.

On June 21st 2012, the winners of the 2012 Royal Institute of British Architects (RIBA) Awards were announced. The awards signify architectural excellence within the industry and were presented to fifty buildings in the UK and nine within the EU. Winners included the new BFI Master Film Store in Warwickshire, a Victorian house on Dalling Road in London and the £25 million Exhibition Road project.

“What really stands out is that even in times of austerity, we can still deliver amazingly clever, high quality buildings that reflect the needs of today and enhance our daily lives. These projects are truly exciting and inspiring.”

Held every two years, the Aberdeenshire Design Awards celebrate the most outstanding achievements in design innovation. With the original 106 designs now whittled down to just 28, the awards ceremony will be held on 6th September 2012.

The shortlist encompasses a variety of impressive projects, including the beautiful Les Enfants Nursery in Inverurie, which also received a Commendation Award at the Aberdeen Society of Architects Design Awards and was shortlisted for the NMT Awards 2011.

NHBC has announced the names of over 400 top achieving site managers who have been recognised in the first round of the Pride in the Job Awards 2012. Names were shortlisted from over 13,000 UK site managers who have excelled in their field over the past 12 months. Amongst the 2012 winners are: Hugh McKay for Heritage Gate Phase 2, Gerry Rice for The Limes and George Carty for Calderpark.

Our construction contractors are also making us proud. In May 2012, WFC was awarded the coveted NAS Design Award for its exceptional work on The Delaunay. Commenting on their win, Managing Director of WFC, Steve Howle, said: “We are extremely proud to have been awarded the NAS Design Award after working alongside our client Rex Restaurant Associates and designers David Collins Studios, whose approach and level of professionalism enabled us to produce a high quality end product.”

Beardwell Construction Ltd celebrated another win for the construction industry when they were awarded Heritage Project of the Year 2011 at the National Federation of Builders Annual Awards 2012 for their work on the 130-year old Prittlewell Chapel in Southend-on-Sea.

We now invite you, readers, to join us as we praise the people who are building our future.