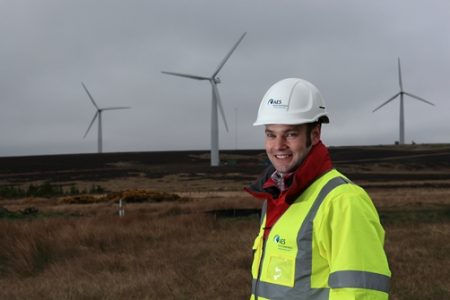 The construction of Drone Hill Wind Farm in the Scottish Borders is nearing completion.

Drone Hill Wind Farm comprises 22 Nordex N60 turbines that are capable of generating a combined capacity of 28.6 MW of energy. Each turbine provides a capacity of 1.3 MW and has a blade length of 29 metres with a rotor diameter of 60 metres.

The wind farm is being built by worldwide power project developer AES Corporation, with Raymond Brown as the main contractor.

Work began on Drone Hill Wind Farm in April 2011. Two cranes were employed to install the reinforced concrete turbines, however as the site is being constructed on moorlands two of the turbines have been built on submerged foundations. An AES Corporation substation is also located on the site to transfer the power generated from the turbines once they are fully operational.

Throughout the duration of the project, an ecological clerk of works has been in place on the site to monitor the construction work along with monitoring of the water to ensure that there is no environmental contamination.

Once Drone Hill Wind Farm is fully operational, AES Corporation will generate and supply electricity to the National Grid through a power purchase agreement with Statkraft – a major player on the European energy exchanges.

“As there is a lot of bird breeding in the vicinity of the site one of the planning conditions stated that we could only erect turbines during April and September. Although we started work on the project in April 2011, we could only carry out the erection of nine turbines at that time. The remainder of the turbines were then erected from April 2012 onwards.

“We are very close to completing the project and once the site becomes fully operational Drone Hill Wind Farm will benefit from good prevailing wind speeds which will ensure we generate enough electricity to power the equivalent of around 14,700 average households. 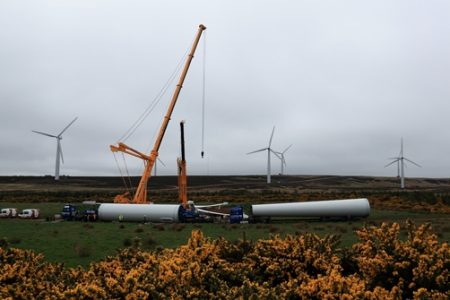 “I have been involved with renewable energy for over six years and the construction of this wind farm is another step in the right direction for energy production. Wind is an untapped energy source and by harnessing it we will help Scotland to reach its target for renewable energy.

“We are experiencing increasing oil and gas prices and a significant challenge to secure our energy supply in coming years. Given that we are the windiest country in Europe it is about time that we fully embraced this valuable resource.”

Drone Hill Wind Farm will be fully operational in August 2012.