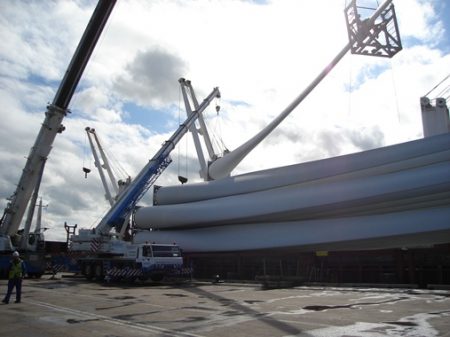 An £80 million wind farm is under construction near Thurso in Caithness, Scotland.

The Baillie Wind Farm will comprise twenty-one N90 wind turbines that measure 110 metres to the tip and feature a 65 metre hub and 45 metre blades. In total the wind farm will generate 170 GWh of energy, enough to power the equivalent of 35,ooo homes.

Once the wind farm is operational, it will generate an expected £100,000 annually into a West Caithness Community Fund for local initiatives. Furthermore, it will produce an additional £25,000 a year for a new business development fund that will be managed by the Caithness Chamber of Commerce.

“This is a large and complex project whose successful development brings a range of local economic and community benefits, as well as contributing to national and global environment aims through generation of renewable power. We are looking forward to moving into operation this year and to a long and productive association with Caithness.”

A workforce of approximately 40 construction workers and engineers carried out the work on the turbine bases, which in turn involved pouring more than 15,000 tonnes of concrete using locally-sourced gravel and sand.

Following this, an offloading and transport exercise was implemented in May 2012 to minimise disruption to local motorists, residents and businesses. This involved transporting the blades to a holding site at the former Dounreay Airfield.

The project is progressing well and now that the civil work is almost complete, turbine erection will begin in August 2012. This phase is expected to be completed this autumn, with the project feeding green power into the upgraded Beauly-Denny line by November 2012 and fully commissioned in early November 2013.

“This is an exciting project for myself and my brother Steven, particularly as I have a background in agriculture and he is a lawyer by trade. Although the planning process was relatively difficult, we are very pleased with the progress that has been made and can’t wait to see the end result.

“Onsite challenges have included designing the wind farm to have the least ecological impact possible. As a result, we have had to take account of several extraneous issues, including the movement of birds through the air.

“We have already implemented a bird monitoring scheme, and once the wind farm is up and running we will monitor the effect that the development has on the surrounding geese. We are very aware that we are working in a sensitive area and are therefore fully prepared to shut down any turbines if they are deemed to have a significant effect on the local fauna.

“Our development partners Statkfraft have been brilliant, and we look forward to developing a successful long-term relationship with them.”

The project compliments the extension of Rothes wind farm near Elgin, which will boost capacity by an additional 45MW. In addition supplying energy to over 20,000 homes, the project is expected to create 60 constructions jobs, along with permanent local operation and maintenance jobs.

“These schemes are good for Scotland’s low carbon economy and are further examples of the action we need to take now to tackle climate change. The north of Scotland has huge renewables potential and these two schemes will provide tangible, lasting benefits to the communities involved as well as a reduction in carbon emissions.”

Statkraft is Europe’s largest generator of renewable energy, with a total capacity of more than 14,800 MW. The company is a major player on the European energy exchanges and develops and generates hydropower, wind power, gas power, solar power and district heating.