The eighth annual Constructing Excellence in the North East (CENE) Awards took place on 11th May 2012. Over 500 industry professionals attended the event, with 14 awards being handed out to celebrate the latest developments in construction industry.

Awards included Contractor of the Year, Achiever of the Year, CIBSE North East Building Services – Best Practice Award and the prestigious Project of the Year accolade.

“I was absolutely amazed by the response to this year’s awards. We are proud that our Awards showcase and celebrate achievements by projects and organisations from across the built environments and that they continue to set the benchmark for excellence.

“The quality of submissions this year was once again outstanding and all of the shortlisted entrants should be congratulated for reaching the final stage.

“Our 14 category winners join other regions in going forward to the national final that will take place in London in November, giving them an opportunity to receive further recognition and acclaim on a truly national level.”

Amongst the nominations for an accolade at the CENE Awards was the £6 million restoration of Theatre Royal Newcastle. Work was completed on the project in September 2011 and was conducted to restore and modernise the Grade I listed theatre whilst at the same time make the building DDA compliant.

Works included the complete internal redecoration of the building and the improvement of disabled access through the Theatre’s main entrance. New toilet facilities were also installed in the building, whilst a new lift was added to the orchestra pit and technical lighting was repositioned onto a high level gantry.

To complete the internal work, original carpets were rewoven, original wallpapers were reprinted and all existing light fittings were remade. In addition, a seating specialist from Belgium was brought on to the project to design and manufacture new seats for the auditorium. The seats were designed to look as if they were manufactured during the 19th century yet at the same time offer the comfort of 21st century living.

As well as the internal makeover of the building, a small amount of exterior work was completed to repair damaged areas of the stone elevation.

Work began on the restoration project in March 2011, with Newcastle-based company Surgo Construction as the main contractor and Sansome Hall Architects as the architect. F K Howard was the cost consultant. 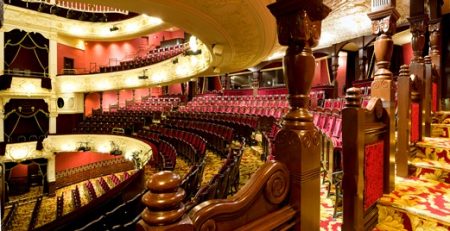 Newcastle City Council was the project manager for the restoration work, whilst Cundalls was the structural engineer, Max Fordham LLP was the mechanical and electrical consultant and Astryan Ltd was the painting subcontractor.

“Before the restoration work was conducted wheelchair access to the building was to the side of the Theatre, which wasn’t ideal. As a result, we made alterations to allow disabled visitors access through the main entrance just like everybody else.

“We were initially commissioned to provide a conservation management plan for the building and from there we developed a restoration strategy, put together a team and took the scheme from a proposal through to construction and completion.

“To be nominated for an award at the Constructing Excellence in the North East Awards is fantastic as there’s a lot of fierce competition in the industry so it’s great to know that we’re doing our jobs well.

“Throughout 2011 we had a very busy construction period and we are currently in the running for three more awards, which is just brilliant.”

“It was very important for Astryan Ltd to be involved with the restoration of Theatre Royal Newcastle because for us it was the first time that we had ever worked on a project of this nature.

“Our work was reward enough but to know that the project was nominated at the CENE Awards was even more rewarding.”

Astryan Ltd is a nationwide commercial painting contractor based in the North East. The company carries out industrial and decorative painting for all sectors including housing, leisure, retail, schools and local authorities. In addition, Astryan Ltd can also provide packages – including minor building repairs.

The company was appointed by Surgo as the Painting Subcontractor for the Theatre Royal Project and provided all the decoration services which included the application of emulsion paints, stains, varnishes and the hanging of specialist wallpapers. A major part of the restoration work was the application of gold leaf to specified areas throughout the Theatre.

“The restoration of the Theatre Royal was a truly prestigious project for Astryan to undertake. It provided us with an opportunity to bring some experienced painters out of retirement in order to show our younger employees skills that are seldom used in modern times, such as aged metal effects, marbling and the application of gold leaf. In all approximately 36,000 pages of gold leaf were used in highlighting areas specifically chosen by the architect.”